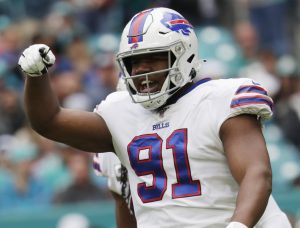 Drafted with the 9th overall pick in the 2019 NFL Draft by the Buffalo Bills, Ed Oliver had drawn comparisons to All-Pro DT/DE Aaron Donald.  While at the University of Houston, Oliver garnered All-American honors, exhibiting dominant skills and abilities.  His rookie season did not do much to dissuade those notions.

In 2019, Oliver only played 54% of the defensive snaps for the Bills, but still managed to accumulate 5.0 sacks and 5 tackles for loss.  His 557 total snaps ranked him 73rd amongst all defensive lineman.  His snaps will undoubtedly rise in 2020, as he moves into a full time starter role with the departure of Jordan Phillips.

Oliver did run into some legal trouble in the offseason, however.  In May, he was arrested for DWI and unlawfully carrying a weapon.  Those charges were ultimately dropped in July, just in time for training camp.

He is a breakout candidate heading into his second season, and will be a major part of the Bills defense this upcoming season.  If his usage can jump from 54% in 2019 to around 72%+ in 2020, Oliver could see himself in the Pro Bowl and you could have yourself a stud defensive lineman on your fantasy team.  He is a top-end, high-caliber DL moving forward in dynasty leagues.