Dynasty players are all about the long view, but player values are fluctuating on a week-to-week basis. Two weeks ago, Amon-Ra St. Brown was a divisive back-end WR2 (although, I seem to recall someone extolling his virtues a while back on this very site https://dynastyprosfootball.com/objects-in-the-rear-view-mirroramon-ra-st-brown/), now he’s trading for no less than a 2023 1st plus a productive player. Paying market rate for a player today can be a clear win next week if that player’s value takes off in-between. With that in mind, let’s take a look at a few players who you may want to look into trading for now before their value goes up and their trade window closes. 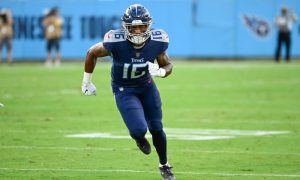 Dynasty veterans know the rule of thumb with rookie receivers is let them struggle early, then trade for them right before they learn the speed of the game, get in sync with their QB, and they start producing fantasy points. Garrett Wilson has shown us that sometimes happens sooner than we expect, even if they’re not Ja’Marr Chase-level talents. Burks and Olave could be the next two in line for feature roles. Tennessee looks like a flat out bad team and Derrick Henry looking like he’s running through molasses should lead to more passing volume and more garbage time than we’re used to with this team. Olave’s advanced metrics show a star in the making. Jameis Winston’s hideous early season inefficiency is the only thing holding him back right now. Neither of these two are exactly cheap, they still have most of their rookie draft shine, but like Wilson, they’re one elite game away from being highly coveted assets.

Going into the season, Lamb and Pitts were two of the most valuable dynasty properties you could have; young, supremely talented, in great situations, and in Pitts’ case, playing an exceptionally scarce position. Real or perceived, their early season struggles have made them available for costs that would have been unthinkable on Labor Day. In one of my leagues, Pitts was traded for Darren Waller and Clyde Edwards-Helaire. That offer would have been laughed at and insta-rejected not that long ago. At this point, it really can’t hurt to ask and see if they’re available at all. These two are Burks & Olave on steroids. One good game and they go back to being nigh-untouchable.

During best ball draft season, Etienne was the RB hotness. Two weeks into the season, James Robinson is unexpectedly back and Etienne is being benched in fantasy. That sound you hear is BUY LOW sirens going off. Much like Cam Akers, Robinson coming back from an Achilles injury so soon is a great story, but he’s been very inefficient, averaging less than 4 YPC. His value is being entirely propped up by touchdowns and Etienne’s high profile sure-touchdown drop on 4th down in the opener. Once those normalize, Etienne will go back to being the RB to own in Jacksonville, which will be a good thing, because… 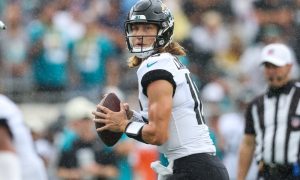 Jacksonville is like Old Faithful right now. You can feel the rumbling under your feet, you know the explosion is coming, you just don’t know when. Once the geyser blows, TLaw will jump up to and potentially surpass Joe Burrow status in superflex. He’s still the elite, generational prospect we saw in college and expected on Draft Day ‘21. Urban Meyer wrecked his rookie season, but even through that haze you can still see the Andrew Luck upside. If there are still doubters, relieve them of their burden.

Yes, Garrett Wilson is this week’s WR hotness, but don’t forget about Moore. He’s no less talented because he has another talented teammate in the WR room. Zach Wilson is due back imminently and we know he has more time together with Moore than Wilson. Plus, if (Zach) Wilson can live up to his draft pedigree, there will be plenty of room at the table in this offense for both to eat.

This is simple math. After Week 3, he’ll be half way through his suspension and his managers will take an “I’ve held this long, why should I sell now” attitude, and deservedly so. If the DHop manager in your league is off to a slow start, now is the perfect time to go after him.

A 5/50/0 line in a prime time game is as bad as Kelce’s ever going to look, and for a Tight End, it’s still really not bad at all. You probably have until exactly 1:00 PM EDT Sunday to get him at the most modest of discounts. Be sure to mention how positively elderly Kelce is looking in your proposal. 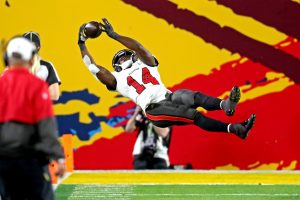 The hamstring injury is legitimately the best thing that could have happened to him, forcing the Bucs to give his reconstructed knee additional time to heal. Like DHop, if his manager is off to a slow start and you can afford the downtime, see what it would take to get Godwin onto your roster.

He’s the same guy he’s always been. Carolina’s offense has unsurprisingly struggled coming together early, despite the expectations of default QB improvement. If Moore is the victim of over-inflated pre-season expectations, get him now before the Panthers pull it together.

Speaking of guys who are what they’ve always been… You’ll likely have to wait until next week to make this deal go down since he played Thursday, but he has double digit targets in every game so far. The Steelers now have a “mini-bye” to self-scout and figure out how to start scoring touchdowns. Coming back against the Jets won’t hurt that effort, but it may tank your chances of trading for Diontae at value once he goes off.

We end with a low cost/no cost long term stash. The window isn’t closing on this one so much as slowly shimmying down the sill. DPJ’s deep threat talents are a terrible match for Jacoby Brissett’s game-manager arm. Once Deshaun Watson’s suspension is over, look for him to get DPJ involved in the offense in ways he currently cannot be.