Many players are polarizing in the National Football League, and when it comes to dynasty, the dilemmas run even deeper.  The combinations of age, skill, team and opportunity all come into play when evaluating talent and price; and some are more perplexing than others.  Let’s take a look at Diontae Johnson of the Pittsburgh Steelers.

Diontae Johnson has this reputation as a player who is always involved, but never doing anything much with the opportunity.  The three headed monster in Pittsburgh at receiver consists of viral star JuJu Smith-Schuster, gadget Chase Claypool and leader Diontae Johnson.  Can we really place so much value on someone who has to share so much?

A receiver has to not only catch the ball, but more importantly, hold onto it.  In real life, a drop is devastating, but in fantasy it amounts to zero points.  No matter the length of play or touchdown caught, if it’s not contained, it means zip, zilch, nada.  But, does he really drop the ball as much as people say?  His 14 drops landed him as 10th among qualified receivers in 2020, but in 2021, that number shot down from 13.2% to just 4.8%.  The massive improvement is fantastic, but the prior history cannot be forgotten.

Ben Roethlisberger is nothing short of amazing.  His career numbers are near the top in almost every passing category and he was impossible to take down.  Late in his career, however, he was nowhere near the quarterback who is one of twelve quarterbacks to win the big game more than once.  And, worse yet is we don’t know who will be passing to Johnson next season.  Johnson’s numbers were fantastic despite Ben’s arm, but will it get even worse next season?  Or, if the quarterback is improved, will Johnson regress from the lack of short passes?  Only time will tell, and people don’t like the unknown. 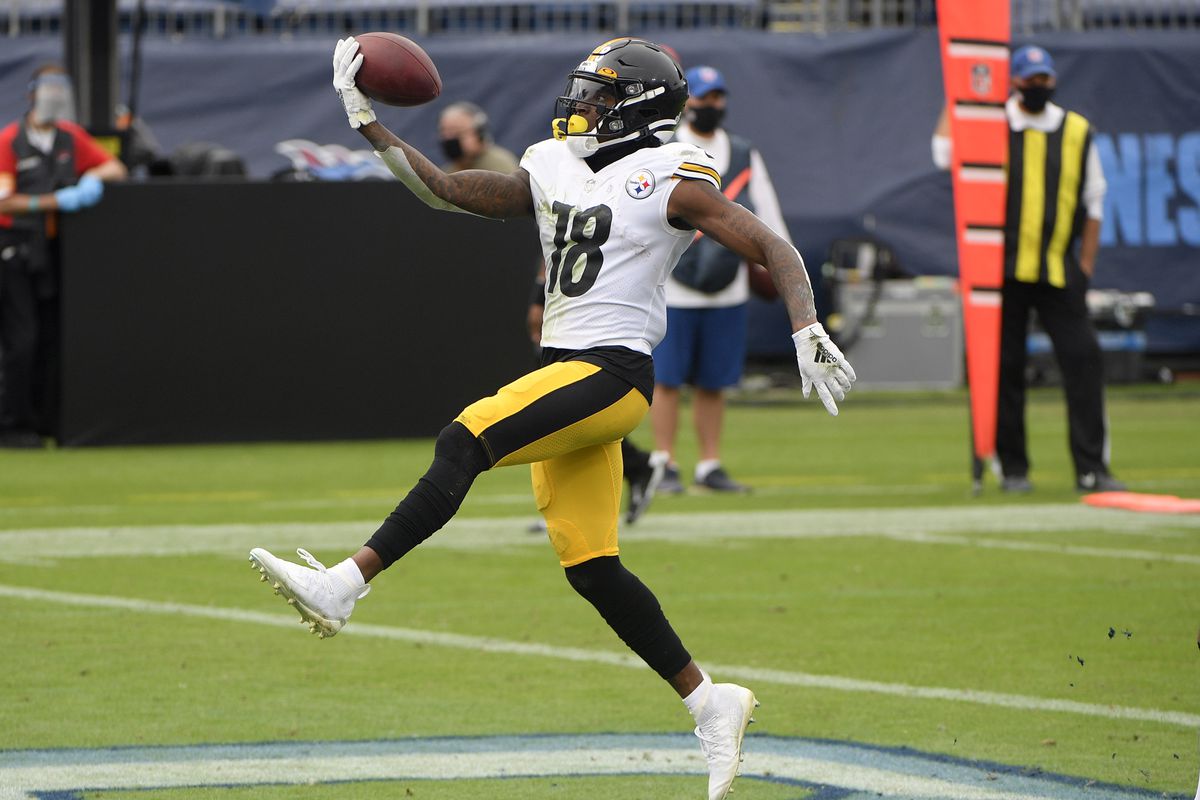 Many of the top wide receivers in the NFL, although talented, have benefited greatly from amazing quarterback play.  I’m sure Tyreek Hill and Davante Adams would be top receivers otherwise, but would they be as good without Patrick Mahomes and Aaron Rodgers respectively?  Diontae Johnson has arguably done the most with the least.

As a rookie, Johnson turned eyes fairly quickly.  As a sophomore, he was the 21st best receiver in PPR formats and last season, he ranked a fantastic 8th place.  Astoundingly, he quietly finished behind only Cooper Kupp for the league lead in targets, while having single digit targets in just three games in 2021.  The gap between him and the next closest Steeler receiver was crazy too.  Johnson was ahead by a whopping 62%.

As mentioned earlier, the drop rate in 2020 was ridiculous, but the improvement was equally ridiculous.  Aside from that success, Diontae Johnson has improved on so many metrics.  It’s easy to see his improvement in targets, receptions, yards and touchdowns every year, but the advanced statistics are even crazier.  Each season, Johnson has gotten better in catches on first downs, air yards and yards after the catch.  It’s easy to look at the simpler stats and nod your head, but the deeper ones are a wonder.

Last season, Diontae Johnson was ahead of the likes of so many players ranked higher on most people’s boards.  A PPR monster, the trust is just a given with the 25 year old product of Toledo.  Routinely consistent, the floor is not higher on most wide receivers than that of Johnson’s.  Also noteworthy is that he never had a single game last season with single digit fantasy points and crossed 20 points in a game six times.

For reasons above or whatever unknown, Diontae Johnson is simply not getting the respect he is due.  He completed just his third season and who knows what he’s truly capable of?  He’ll never be drafted as a wide receiver one, but the statistics would argue otherwise.  No matter what, he’s simply a steal and if the others in your league can’t see that, they are blind, stubborn or just plain ignorant.  Take advantage and get him now.