The days of the Aaron Rodgers to Davante Adams connection is a thing of the past and it leaves Packers and fantasy football fans scrambling to find the answer moving forward.  And while losing who some consider the best wide receiver in the league is a massive blow, the four time MVP is still there running the show.  So someone or a combination of players are sure to continue to feast in 2022 and beyond.  Predicting the WR1 in Green Bay is no easy task, but it’s our job as competent fantasy football managers to do just that.  In the beginning of the off season, it was Allen Lazard SZN, but now pundits are less than sure.  So, what do you do with Allen Lazard moving forward in dynasty?

The situation is eerie in many ways in Green Bay.  Losing Davante Adams was one of the single biggest losses to any team this offseason.  And while it’d be straight up assinine to suggest any one player could fill his shoes, the show must go on.  But even the most iron willed and uber Cheese Headed faithful have to admit there are massive question marks surrounding Allen Lazard.  It can be completely rational just to wash your hands of him as a fantasy manager, especially in dynasty.

His Value as the “WR1” When Being Sold

Even if you’re into Allen Lazard as the true top dog for A-Rod, you have to admit the value in offloading the WR1 in Green Bay.  For years, Aaron Rodgers has made the top receiving option for his team nearly matchup proof.  Week in and week out, you can depend on top numbers to lead your team to a victory.  Yes, I am fully aware that no one replaces Davante, but this is  Aaron freakin’ Rodgers we’re talkin’ ‘bout here!  The man makes magic happen; plain and simple.  The defense is still elite too, so you know that offense will continue to be on the field serving up points on a silver platter.  Someone is sure to pay up for it in one of your leagues.

Listen, I know not everyone is a believer in Allen Lazard as the answer moving forward, and if you feel that way, you’re not alone.  But make no mistake; there are others who feel differently.  It doesn’t matter who Aaron Rodgers has.  He will dominate and his WR1 will too.  Strike while the coals are hot and get value for Lazard while you can.  As the second option, Lazard did very well in 2021.  So you can only imagine how he’d be as the first option.  Just use your “used car salesman” vibes here. 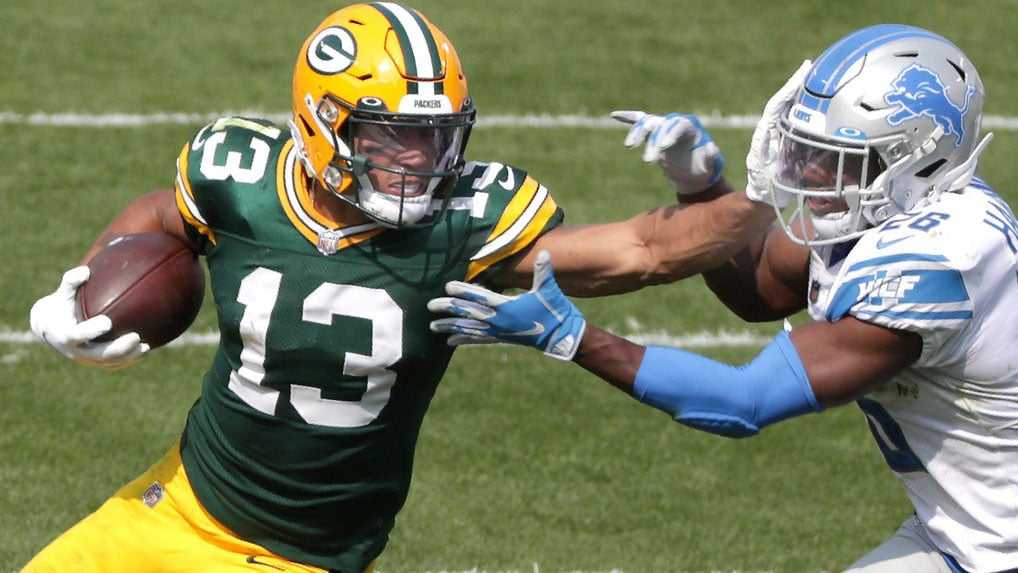 New Dogs in the Fight and Devastating Backfield

Everyone loves shiny new toys.  And for the first time in his career that I can remember, it seems as though Aaron Rodgers does too.  I can’t recall a time where he was anything close to buddy-buddy with rookie receivers, but he seems to like Romeo Doubs.  Let’s also not forget the value of 34th overall pick, Christian Watson.  Watson is on the mend currently, but he won’t be forever.  In redraft the additions of these two is not as devastating to Lazard, but it dynasty this is quite troubling to the value of his stock.  New dogs are nipping at the heels and Lazard’s spot at the top is in jeopardy.

Let’s not forget that the Packers also have one of the best running back tandems in the entire league.  With no Davante Adams, the changing of the guard isn’t so simple.  It’s easy to assume that a receiver will just take the targets, but perhaps Rodgers will spread it around to two of the better receiving backs in the league.  Even with Davante, Jones still topped 60 receptions in each of the past three seasons.  And although he only amassed 37 targets in his first full season, AJ Dillon caught all but 3.  He certainly makes it harder for Rodgers to throw elsewhere when he’s on the field.

It’s completely normal to have doubts about Allen Lazard, but the flip side of the coin is equally as compelling.  For all the doubters and haters, this provides an excellent opportunity for the believers and the gamblers.  Aaron Rodgers’ top option has never been cheaper, so the appeal on Lazard is definitely there.  Right now in drafts, Allen Lazard is going at 118.8 in dynasty ADP on Sleeper.  As the 51st WR off the board, he’s going well behind injured teammate, Christian Watson, who hasn’t even played a snap.  And even if you are in a league that has already drafted, this should tell you all you need to know about his value in dynasty.  The price is worth the gamble.

It’s easy to get lost with names like Aaron Rodgers, Davante Adams, Aaron Jones and AJ Dillon on offense if you play for the Packers.  But, in case you didn’t know, Allen Lazard performed quite admirably in many categories despite having to share the ball so much on this high powered offense.  And as a WR2, there aren’t many players who performed nearly as well while maintaining the lack of love from the dynasty community as Allen Lazard did in 2021.

Despite Davante Adams on the team, Allen Lazard finished 10th in the entire league in touchdowns inside the ten at wide receiver.  Aaron Rodgers also had a 132.8 passer rating when targeting Allen Lazard.  Lazard also cut his drops down by four from 2020 despite having his targets rise by over 30%.  With Devante Adams leaving, along with a couple others, there are over 240 targets up for grabs and Lazard is sure to get a ton of them coming his way.

Since Aaron Rodgers took over the helm for the Packers in 2008, he has been a man possessed.  But it’s important to note that his four top receiver’s success was not instantaneous.  While it’s true he was a beast for years, it took until Jordy Nelson’s fourth season to break out as the alpha.  And although Randall Cobb’s second season was fantastic, he regressed quickly the next season.  In truth, it took until year four for Cobb to be fully trusted by A-Rod.  James Jones’ rookie season went very well, but he wasn’t an actual starter until season six.  And even though Davante Adams was dominant from day one, he wasn’t in the best of the league echelon discussions until arguably year three or more likely year four.

While it remains to be seen if Lazard, or anyone on the current roster will hit the numbers these men did, there will be fantasy success in 2022 and beyond for the Packers at wide receiver.  The good and bad news, depending on your perspective, is that in dynasty it sometimes takes time to reap the benefits of a blossoming talent.  If you’re going to gamble on a player, there are a few viable options, but the one to give the most instant success is statistically most likely to be Allen Lazard.  Aaron Rodgers is also not one to have a receiver flourish only to be replaced quickly.  So, once you’re at the top with A-Rod, you’ve got a good chance of staying there.

Let’s face it.  No receiver in that room is truly proven, but of the bunch, Lazard is the best bet.  It’s not the prettiest of choices, but the price you’ll have to pay alone makes this an easy one for me.  Pair to that his rapport that is already established, if you’re going for a piece of that receiving room, it makes the most sense to go for Allen Lazard.  While it’s true that I like the talent of Christian Watson more, he’s also very cheap right now due to the injury, so if I have room, why not get both on my squad?

Are you really going to be the guy who passed on Aaron Rodgers’ cheapest top receiver in dynasty?  Can you look yourself in the face every morning when you know that Billy, the guy you just can’t stand in your league, has Allen Lazard on his team at a cheaper than reasonable price.  Can you let Billy, with his smug little face, have that win in his back pocket while you cry into your cereal in 2022?  Don’t make that mistake.  Make Billy pay.  Get Allen Lazard on the right team: your team.