Let’s be honest with ourselves here.  This has been the most exciting and earth shattering off season ever.  I can’t recall when the National Football League has seen so many names shifting, let alone franchise faces up and leaving with almost no prediction.  The swirling tornado of trades and signings, while exciting, can be frustrating at the same time.  For some, it is joyous or depressing based on real life favoring a team or player, but for others in dynasty, it can be maddening to assess the value of players whom we either own or want to roster.  Since NFL inception, Ronald Jones has been perplexing, and more than ever, managers want to know what to do.

The Tampa Bay Buccaneers truly believed in the greatness of Ronald Jones.  The running back out of the University of Southern California was simply brilliant.  And even though his receiving game wasn’t on top, his rushing was exceptional; crossing 1500 yards and 19 touchdowns on the ground in his senior season.  It all came crashing down his rookie season in the NFL, where in nine games he rushed for a measly 44 yards.  He’s had his moments for sure, but overall, it hasn’t matched his college profile.

With Doug Martin slowing down, a replacement was inevitable.  In fact, since his rookie season, The Buccaneers hadn’t had much luck on the ground.  Enter the 2018 NFL Draft.  Like any season, with holes to fill, Tampa Bay elected to take the fifth running back off the board.  And while first round pick Vita Vea panned out quite nicely, the second round pick had one of the worst rookie seasons ever.  Since then, he has improved, but hasn’t become that starter they had hoped for.  After only one season as the starter, Tampa Bay brought in Leonard Fournette.  Can Jones ever be a true starter?

Finally a free agent, and showing promise after sharing the backfield essentially his whole NFL career, the sky was the limit this off season for Ronald Jones.  Well, the sky indeed had a limit as he signed with a team that already had a starter.  While the Chiefs have one of the best running games in the league, so did the Buccaneers.  And while Clyde Edwards-Helaire doesn’t have complete trust, he has to be more trusted than the newly signed Jones.  Some are pretty sure they’ve seen the ceiling on Jones, especially in a committee backfield, because after all, we’ve seen it before. 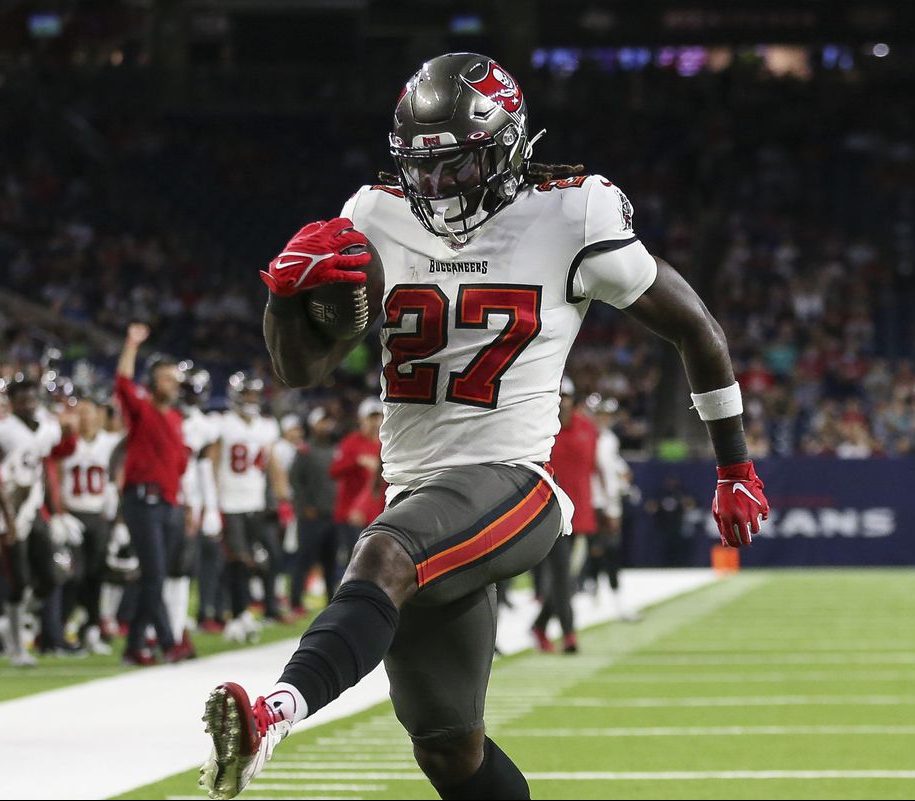 For some, it seems as though Ronald Jones has been in the NFL for a long time, but even though it will be his fifth season in 2022, he’s still only 24 at the time of my writing.  It is true that his rookie season was historically terrible, but he was so young at the time and has had time to learn and evolve.  It’s important to look at how he improved after the rookie season.  And in his only season as the starter, it was pretty good.

To truly assess Ronald Jones, we need to look at the 2020 NFL season.  This was the only season, thus far in his professional career, that he was technically a starter.  Despite sharing the backfield with Leonard Fournette even then, his numbers were trustworthy.  In only 14 games, he was just shy of the 1000 yard mark in rushing and still managed to be involved in the passing game.  His eight total touchdowns and 5.1 yards per rush were even more astounding considering the number of weapons he needed to share with.  No disrespect to the Chiefs, but they don’t have the talent of the 2020 Bucs.

No, I haven’t gone crazy here.  One of the reasons to sell him is one of the reasons to buy him.  I may be one of the biggest Clyde Edwards-Helaire truthers out there, but even I need to acknowledge the shaky ground he treads on moving forward.  Even though the Chiefs invested a first round pick, the backfield has been given to the likes of Derrick Gore, Darrel Williams and even Jerrick McKinnon last season.  In fact, in the playoffs, Andy Reid trusted Jerrick McKinnon over CEH.  It’s also important to note that even if you don’t start as running back for the Chiefs, you have value.  I think the opportunity is better than ever for Ronald Jones to take the reins.

At the beginning of the off season, I was preaching to buy Ronald Jones.  Largely due to the fact that Leonard Fournette was a free agent and Ke’Shawn Vaughn is unproven.  So if Jones resigned and Fournette walked, it was worth the gamble.  There was also the opportunity to sign as a starter with another team.  Now that he has signed in Kansas City, does my opinion change?  I think not.

Although there is a crowded backfield, it’s clear, much to my dismay, that the team has no faith in Clyde Edwards-Helaire as the starter.  And, as I mentioned earlier, even if CEH is the starter, not only is he often injured, any running back has value in an Andy Reid system.  Most people also don’t have much faith in Ronald Jones, so the price is right for the taking.  Make the right decision and grab Jones while he’s affordable.