Marquise “Hollywood” Brown. The newest Arizona Cardinal. On the first night of the 2022 Draft, there was a shocking trade that saw the Cardinals send their first round pick (23rd overall) for Marquise Brown and a third round pick (100th overall). A lot of people are now wondering what they should do with their Hollywood shares and where his value is at this point.

Brown has been in the league for three years now and has improved year after year. He’s been a great receiver and was the clear WR1 on the Ravens. He went from 584 receiving yards in Year 1, 769 yards in Year 2, to 1008 yards last year. Brown had earned the trust of Lamar Jackson and the Ravens as a whole, and commanded 145 targets last year - in an offense that is usually very run heavy (Ravens were 3rd in rushing yards last year among all teams in NFL).

Brown commanded a 26.7% target share last year (tied for 10th highest in the league). Being only 24 years old and getting over a quarter of the team's targets is a terrific feat. As for now, going to the Cardinals he may not see a huge target share like before but he may get a lot more quality passes from Kyler Murray than he did from Lamar Jackson. Kyler had the 2nd highest completion percentage in the league last year (69.2 %) and was tied for 1st in deep ball completion percentage (50%).

Christian Kirk led the Cardinals in targets last year with 103, and departed this offseason to sign with the Jaguars. There's a huge opening in the offense and Brown will be able to carve out a role right from the start. Brown actually already has a great rapport with Murray from playing together in college. In their last year together at Oklahoma - Brown finished with 75 receptions for 1318 yards and 10 touchdowns. Hopkins, Ertz, and AJ Green are all over 29 years old and Brown should be able to eventually become the top target on the team as the others age out. 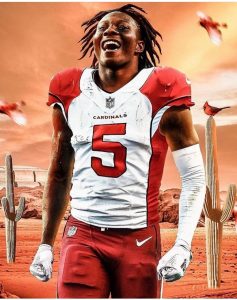 The Cardinals ranked 18th in total passing attempts last year. Their run game was very successful (led by James Conner & Chase Edmonds) which resulted in the team finishing 7th in total rushing attempts and 10th in rushing yards. Kyler also likes to spread the ball around. The highest total target share last year among the Cardinals receivers was 18% (Christian Kirk) which was slightly inflated due to Hopkins missing 7 games, and Ertz missing the first 6 games (was traded mid-season to Arizona). There is a lot more competition for targets in Arizona as they have Hopkins, Ertz, Green, Moore, and newly drafted standout TE Trey McBride joining the fold as well. Brown is very unlikely to repeat his 26.7% target share he had on the Ravens, and will likely be stuck behind Hopkins for targets.

Brown also has not signed an extension yet. Granted, he’s only been on the team for a couple of days but AJ Brown was traded during the first round as well and signed a $100M contract right away. Tyreek Hill was also traded this offseason and got an extension that same day. Arizona was not willing to pay Christian Kirk which resulted in him signing with Jacksonville (for a contract worth $18M per year - which ultimately frenzied the WR market). There are reports that Arizona will be picking up the fifth-year option on Browns' contract - as they did with Kyler Murray as well, and will wait until next year to decide if they will offer an extension or not.

Hollywood is a great receiver and was a great WR1 for the Ravens. He should be able to slide right into the WR2 role on the Cardinals with the possibility of becoming the WR1 in the future. He’s going to be playing with a much more accurate QB who he already has some great rapport with and will easily become one of the focal points of the offense.