The National Football League is one filled with a rich history.  When a feat is accomplished it is unlikely that it hasn’t been done already.  The NFL is actually over 100 years old and the merger that caused the league as we know it today was over half a century ago.  Needless to say, and understating the obvious, records aren’t easily broken and true history isn’t likely to be carved anymore.  But, it does happen.  One of these trailblazers still here is none other than Lamar Jackson of the Baltimore Ravens.

Before last season, I don’t think there was any reason to have such a debate.  Lamar Jackson showed nothing but improvement and prowess; exactly the type of player you want leading your dynasty to the ultimate fantasy prize.  Questions of looming health and long term value have begun creeping in and it’s time to address the question of Lamar Jackson’s value.  Just what do we do with the quarterback from Louisville?

Despite having many talents, we all know the greatest strength to Lamar Jackson’s game is his ability to run the ball.  The opposing team needs to change it’s whole defensive scheme to account for that one unicorn in Baltimore.  The sad truth is that a runner can only be as effective as his protection.  Defenses have not only brought more pressure each and every year Lamar has played, he’s payed the price in a higher sack rate as well.  Last season he was sacked an extra 40% more than he was in his MVP season.  His ineffective offensive line also forces his hand more.  Decisions to throw or not turn into a hurried run play due to lack of time and blocking.  How much longer can Lamar Jackson take the pressure until it plummets his fantasy football value?

Not every team in the NFL has the same talents and depth at positions as others.  Each and every team, no matter how strong, has weaknesses and one of the glaring ones in Baltimore is its lack of receiving depth.  Without a plethora of hands to throw to, Lamar is forced to funnel too many targets at Andrews and rush the ball more than he should.  Even back to college, he was a monster running the ball, but he was a very underrated passer.  The depth at Louisville didn’t consist of one target hog, making Lamar much more of a swiss army knife, rather than a running back playing quarterback; as he’s been called.  Until the Ravens bring in more talent to catch, Lamar will be penned in. 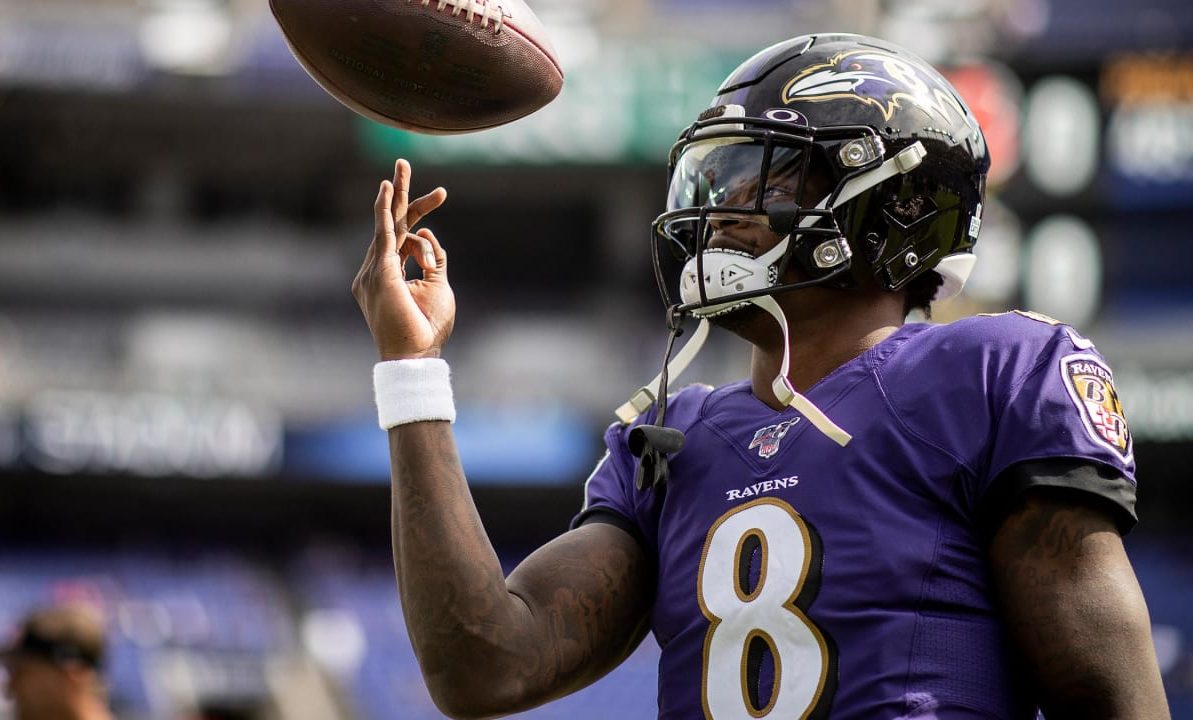 Name another quarterback like Lamar Jackson.  I’d be reluctant to name one; that’s for sure.  Although there are others who share elements of his game, Lamar Jackson is truly one of a kind.  Players like Kyler Murray have had flashes, but not like Lamar Jackson.  And rushing aside, his arm, vision and leadership are greatly underestimated.  Freshly turned 25, the sky is truly the limit.  We’ve only begun to scratch the surface of what he can really do.  And with so many elite options at the position being a limited number, shouldn’t we pounce while we can?  Many would say absolutely.

I’ve alluded to it many times, but if you didn’t know or have never seen him play, Lamar Jackson is arguably the greatest running quarterback of all time.  Michael Vick really broke the mold first in this style, and Cam Newton continued the legacy, but Lamar has virtually perfected it.  Lamar is one of two quarterbacks to run 1000 yards in a single season, and Lamar has done it twice.  In fact, had he played a full season, he averaged to do it for a third time in a row.  In fantasy, points are hard to come by as a quarterback, so if you add rushing, they pile up that much faster.  Throughout his career, he’s never averaged less than double digits per game in rush attempts.  And last season, with less games played, he broke more tackles and had a better yards after contact ratio.

Lamar Jackson has a history of reigning.  Although he’s yet to claim the Superbowl, in fantasy, we only care about the regular season.  In college, he won the Heisman Trophy, for MVP at that level, in only his sophomore season.  And fantasy managers were rewarded in his first full season in the NFL.  Lamar was so insanely good that he won the NFL MVP at only 22.  In fact, he was only the second player in league history to win the award unanimously.  There is no doubt in my mind that Lamar Jackson is the type of player who is not content unless he’s getting better every year.  When you think about making a move for a cornerstone dynasty player, what more can you ask for?

I’ll admit it, despite all his success in college, I agreed with the Ravens waiting so long to draft him. Due to his play style, there are more risks involved; not just with injury, but learning how to let the plays evolve and making the smarter decision for the long term.  Looking back now, it’s insane that Baker Mayfield, Sam Darnold and Josh Rosen went significantly higher.  Baltimore even took tight end Hayden Hurst before drafting Lamar.  It just goes to show that evaluating talent at the NFL level is not an exact science.

Lamar Jackson is one of the best players, not only at his position, but in the entirety of the National Football League.  A truly unique specimen, Jackson is one to be sought after and envied by anyone who doesn’t have him.  I face this dilemma though.  If it were redraft, there aren’t too many quarterbacks I’d like more, but in dynasty, long term value is a considerable factor.  Rush first quarterbacks simply do not last as long as ones that are not.  I would rather have a dual threat quarterback, but at an equivalent price, I lean toward one that will last.  At his current price point in dynasty, it gives me no option than to consider selling, but the deal has to be right.  There has to be an elite quarterback gained in return, however I’m sure I can get one back with draft capital too.