The NFL off season continues and so do dynasty managers in their quest to improve their teams to championship form.  With all the hype of the rookie draft, we can’t forget the established veterans that can be added or released from our squads if the price is right.  While there are many that cause questions of worth, today we’ll focus on Arizona Cardinals quarterback, Kyler Murray.

Since coming into the league, Kyler Murray has been a fantasy beast.  And while there are many aspects to his game that make him viable as your dynasty starter, not everything is sunshine and roses.  As we’ll discuss, recent uncertainty has rendered him as one to potentially be leery of.  The question of long term value has to be on the forefront when we are talking about dynasty fantasy football after all.

It’s no secret that the relationship between Kyler Murray and the management of the Arizona Cardinals hasn’t been ideal.  It’s not known how long it’s been sour, but ever since the Cardinals were ousted from the playoffs last season, it’s been rocky for sure.  Recently, more than one past Arizona player has voiced support for Murray, stating that the Cardinals do not place an emphasis on keeping their players happy.  You have to wonder if his value will remain if things get worse or the scenery changes.

No one can deny the talent of Kyler Murray.  We all know he can rush and the game breaking ability that he has is a rarity among his position.  But have we seen the best that he can do?  If you look at his passing numbers, it’s surprising that he hasn’t improved much.  And the rushing numbers had to go down after his sophomore season.  We can blame the lack of depth in his rookie season, but the last two seasons, the weapons have been there.  If this is the best, should we sell at top value? 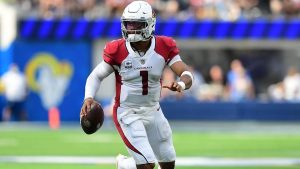 At only 24 years old, the former first overall pick has already had success that many deeply tenured veterans have not seen.  So far, even despite missing two games last season, he’s never finished outside the top ten among quarterbacks in fantasy.  With so much going for him, do you really want someone else to have him on their team?  It’s not often that a top fight option is available for a discount.

Make no mistake: the Cardinals did pretty well in the draft.  Although general manager Steve Keim didn’t break the headlines with his draft, he addressed weak points in the roster.  With his first pick, he grabbed the best tight end available, to support an aging Zach Ertz.  He also grabbed two defensive ends right after to keep Murray on the field, and two guards later to protect him.  And let’s not forget that he surprisingly snatched Marquise Brown out from under the Ravens.  I am a Christian Kirk truther, to be sure, but I have to admit that Marquise Brown is a big upgrade here.  Murray now has two field stretchers and two fantastic tight ends to choose from.

It’s been quite an off season for Kyler Murray.  His social media shenanigans have been unsettling for many, but we have to remember that this is a guy at the top of his game trying to claim what’s his.  Although I may not agree completely with his tactics, they aren’t unheard of and I have no real claim to an opinion as I’m just a schlub sitting here behind a computer.

The age is prime, the talent is unreal and the weapons are good.  If anyone in your league is opening the vault for Murray and asking for less than his asking price, now’s the time.  Opportunities like this don’t present themselves very often.