The highly anticipated second season of Kyle Pitts has left many fantasy players in disbelief at the lack of production this far into the season. With only one touchdown to his name this season, we have all been sorely disappointed. The phrase “positive touchdown regression” was thrown around in any and every conversation involving the freakishly talented tight end from the University of Florida. Dynasty managers have no idea what to do with this start to the season. Should we be trying to buy low or is this the time to get out now before it is too late? Time to tackle this Dynasty Dilemma.

Coming out of Florida, draft scouts simply referred to Kyle Pitts as a unicorn. Comparisons of the great Calvin Johnson were made. The unique combination of size and athleticism creates mismatches everywhere on the field. What makes this even better is getting at a position like tight end where the best ones are so much better than the tier below them. Anyone rostering Kelce or Mark Andrews right now can tell you what it is like to have legitimate 40 point upside from a position where your opponent is just crossing their fingers that whatever mediocre tight end they are starting this week happens to catch one in the endzone to get to 10 points.

This start is not ideal but there are a couple of factors we can consider that could cause a better 2023 campaign for Kyle Pitts. The first being the quarterback situation is likely to change in the following season. Either Ridder will be the guy or they will draft someone. Mariota has been serviceable and overperformed expectations for some at this point but the offense is still 30th in the league in pass yards. With a better signal caller one could expect the Falcons to pass more in future seasons then they currently do as well as more efficiently. 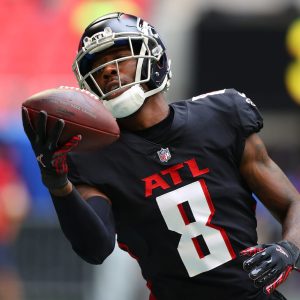 Normally draft capital is a big predictor of fantasy success, this does not necessarily hold true for the tight end position. Let’s look at the last tight ends selected in the first round before Kyle Pitts. We have Noah Fant, T.J. Hockenson, Hayden Hurst, David Njoku, Evan Engram, O.J. Howard, Eric Ebron, Tyler Eifert, Jermaine Gresham, and Brandon Pettigrew. Sure there are some reasonable starters in there but none of these guys were ever at a Kelce or Andrews level of dominance for any extended time.

Another big factor is the fact that Drake London is not going anywhere and will demand his share of targets. Drake London has immediately become the alpha in this offense that will even get back Calvin Ridley next season. Kyle Pitts can only manage 5 targets a game while just competing with Drake London mostly for targets. The Falcons should be one of the teams targeting more pass catchers this offense whether through the draft of free agency so more competition is likely coming and perhaps with a rookie QB or a 2nd year Desmond Ridder under center. Right now you can still get a reasonable return for Kyle Pitts from a rebuilding team but if you wait he will become harder to get a good return for if this continues.

The discount has likely not gone down enough for you to be able to buy from someone that likely spent a decent pick or had to trade a lot to get Pitts but I am not selling Pitts at a discount. This is a textbook hold situation for me. It wouldn’t hurt to send some offers on some rebuilding teams to see what it would take to acquire him but I would not be interested in buying at the cost of multiple 1sts or value equivalent. It is highly disappointing if you are a contender that has Kyle Pitts right now but you are likely just gonna have to ride through it.