As week 9 approaches there is a player who is one of the most polarizing figures this season in fantasy football. He had managers at the start of their drafts using late round picks on him, then dropped due to his lack of production, and currently he is arguably the #1 waiver wire pickup of the week. He is former first round pick and current Chicago Bears Quarterback, Justin Fields.

As most football fans watched, Justin was dominating in college and had obvious upside and talent. Granted, he was throwing to (at the time) future first round picks Garrett Wilson and Chris Olave and was carving up big ten defenses which led him to being drafted by the Bears when they traded up to get him at #11. And if you aren’t claiming him on waivers this week the stock of Fields will only rise. Now, he has Darnell Mooney and Chase Claypool to throw to who are both guys who can make down the field plays. Claypool specifically has a 54% contested catch rate, which is above league average, and Mooney is one of the best route runners in football. Those two, along with up-and-coming TE Cole Kmet, should form a decent enough passing attack for the bears to score in the 20s game in and game out.

After you see his obvious big time arm talent, he may have the best legs in the league not named Lamar Jackson. The last three weeks vs the Commanders, Patriots, and Cowboys, he has had 34 carries, 230 yards and 2 touchdowns therefore making him get you on average 11.67 fantasy ppg just on the ground alone. Those defenses aren’t any slouch either. The Cowboys may have the best DL in football outside of the eagles, the Pats are coached by a guy who is notorious for shutting down first and second year QBs, and the Commanders rank 6th in ppg on average as well as 7th in yards per game. His stock based on his legs alone should be good enough to make the bet of him turning out to be an elite fantasy QB be a pretty good one. 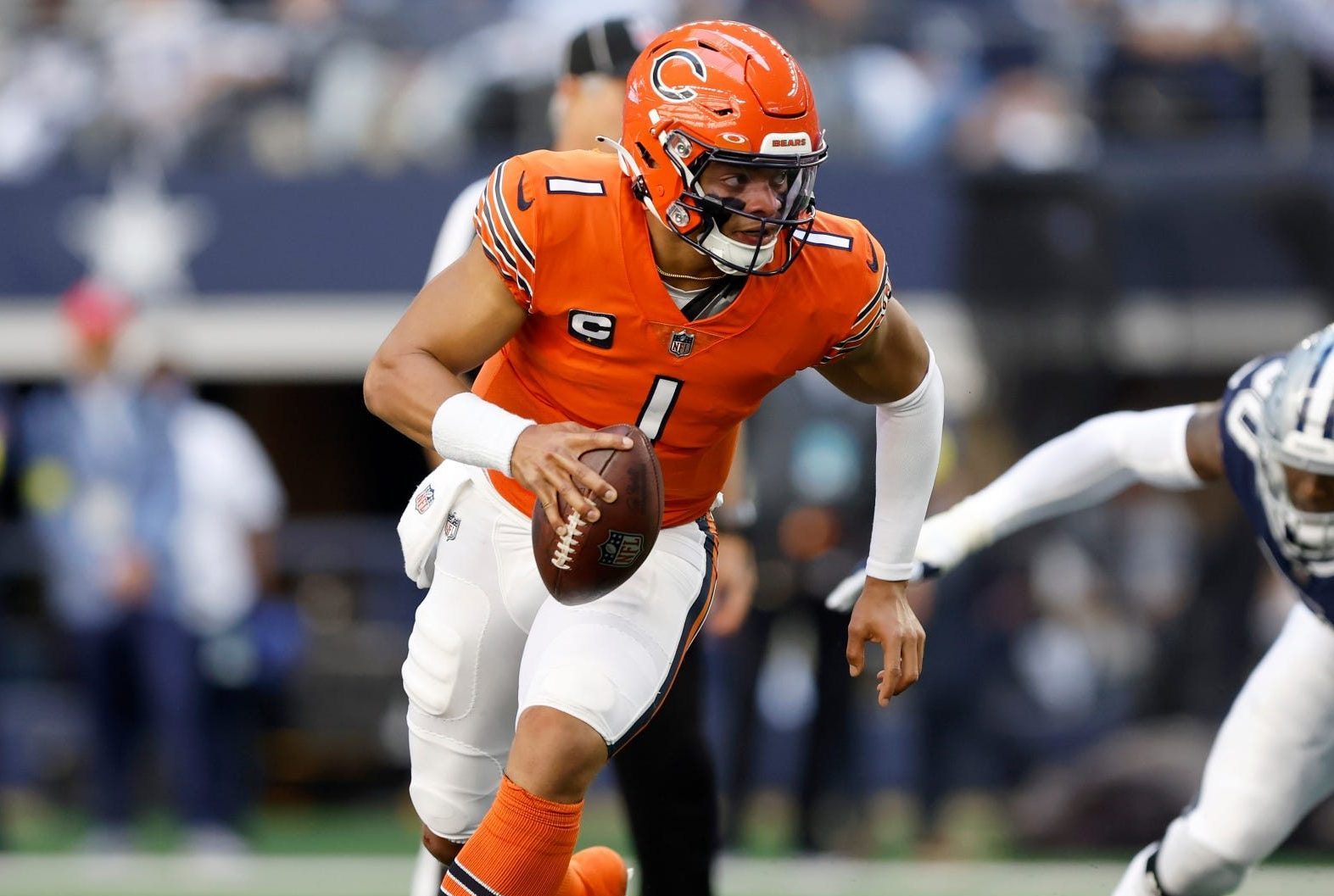 The Bears front office have notoriously failed to have a franchise QB. They rarely have an above average OL and the best WR they’ve had was either Alshon Jeffery or Brandon Marshall depending on who you ask in Chicago. It’s been a defense first organization since the Papa Bear George Halas has been at the helm in the mid 1900s. Justin also has also never had a completion percentage over 60% in the NFL as well. Going from his college weapons to his Bears weapons was an obvious downgrade. In the NFC north, the Vikings have one of the better pass rushers in Zadarius Smith and Green Bay has one of the better DBs in the football in Jaire Alexander and a top 10 DL in football as well.

The verdict on Justin Fields is to buy him at his current value. His value is only going up based on his running ability, passing ability and the way the Bears are building their offense around his strengths. If you miss on him this week, you may be out of luck. Trent Dilfer was quoted by saying he is “95%/5% sure that this thing will work” on Colin Cowherds show on Tuesday afternoon. He also mentioned on Monday on a Chicago radio show that Justin was his favorite prospect to evaluate when he was coaching at the Elite 11 clinics over his countless of years of evaluations. Keep buying Justin fields as soon as you can because if you don’t now, you may not be able to again.