As the NFL Draft approaches, dynasty owners wait with anticipation to see where these rookies end up. Where does Breece Hall end up.. how about Malik Willis? There are so many questions yet to be answered. One question that everyone seems to know the answer to is “Who is the overall RB1 in dynasty?” Jonathan Taylor seems to be the unanimous answer to that question, but I have my doubts. I know that may seem crazy, but here me out. It's obvious that buying Jonathan Taylor seems like a no-brainer. Not only am I going to give you some reasons to buy JT, but I'm going to give you some reasons to actually sell him as well.

Taylor is entering his age 23 season and has his whole future ahead of him. Any educated Dynasty League owner knows that a running backs' dynasty value doesn't last very long. The younger the better. It seems that around that age 26-27 season is when we start seeing issues such as a declining skill set that results in the drafting of a younger, cheaper running back. The biggest issue as of late is their large cap number. Past stud running backs with these possible issues include Ezekiel Elliott, Christian McCaffrey, and Aaron Jones. All of them could be traded or outright released this next offseason. With all that being said, it makes Jonathan Taylor worth that much more in dynasty.

Taylor is an unquestioned workhorse running back, which is rare these days. Some fantasy analysts had strong concerns that his usage in college would affect his performance/durability in the NFL. So far, those analysts have been wrong. In fact, last season Taylor had 372 total touches that included 332 carries and 40 receptions. His durability is not an issue as he has only missed one game in his two seasons so far. The sky could be the limit with Taylor running behind that elite offensive line in Indianapolis. You can plug him in as your RB1 for the next couple of seasons with very little concern. You can’t say that about many running backs these days. 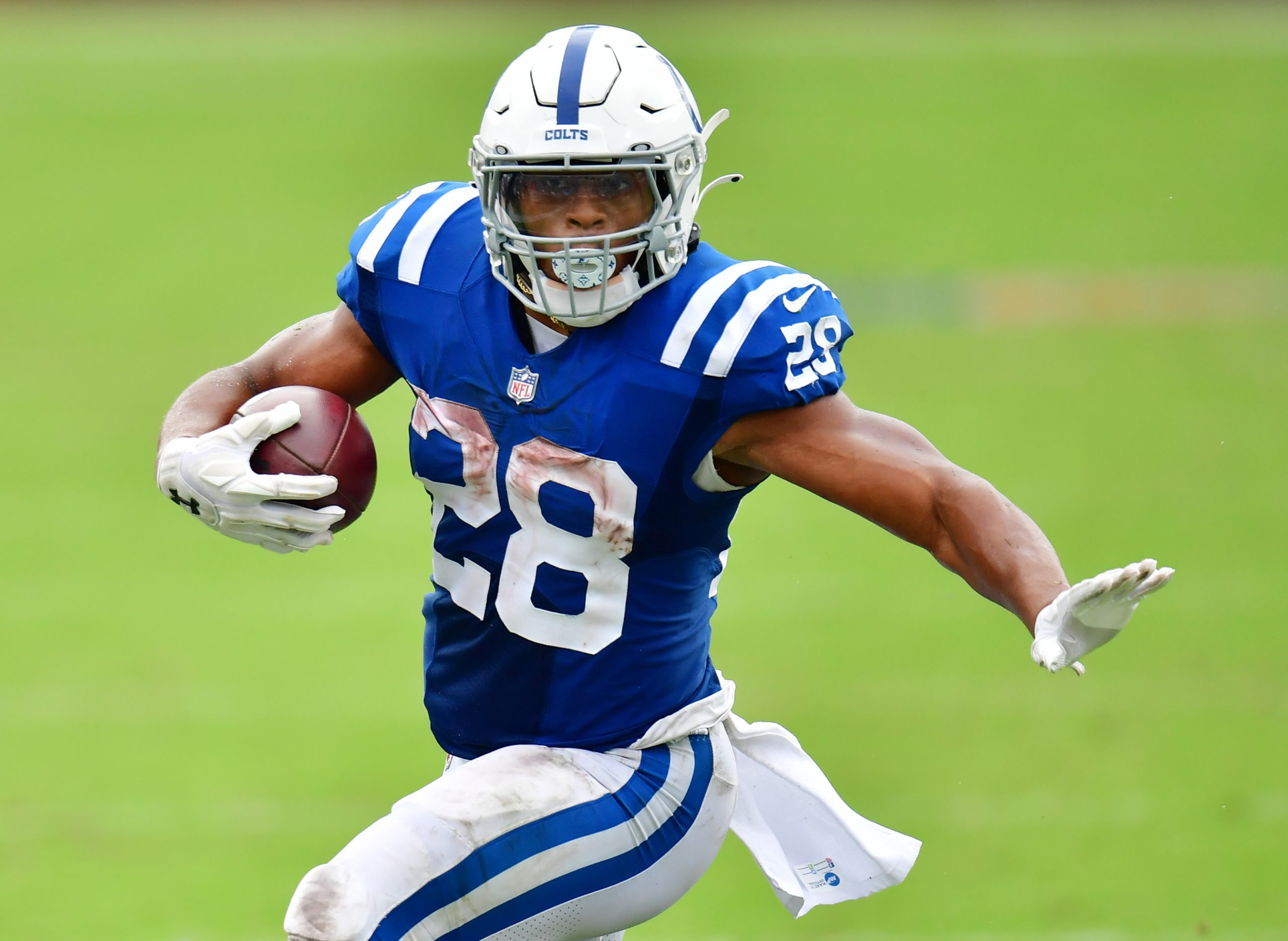 This past season Taylor finished at 22.54 fantasy points per game.. the worst overall RB1 numbers since Devonta Freeman in 2015. Derrick Henry actually averaged 26.92 fantasy points per game last season before going down with his injury. In 2020 Taylor would have finished 4th behind McCaffrey, Kamara, and Dalvin Cook. Listen.. I’m not saying he stinks, but in PPR leagues, he just isn’t the unanimous RB1 to me. Although he should be a lock for 20 fantasy points a game, we could see Henry, McCaffrey, and Dalvin finishing ahead of him this coming season. Since this in dynasty, I still have JT ranked ahead of all three of those guys. With that being said, I can see a players like Najee Harris, Cam Akers, or Javonte Williams taking claim as the overall RB1 in PPR Dynasty this time next season.

With Taylor ranked as the dynasty RB1, it makes me wonder what I can get for him. That hype and dynasty ranking makes him more valuable than he may actually be. Why not dangle him out there and see if you can get a king’s ransom in exchange. I haven’t seen him move much in dynasty, however I have seen some incredible returns in the deals that I have seen. Just yesterday I saw Taylor traded for McCaffrey, Kelce, and Deebo Samuel. I’d take that all day. He was traded in another dynasty league I’m in for JK Dobbins, two mid 1sts, a 2nd, and a 2023 1st. Um.. yes please! After seeing these returns, I absolutely encourage you to see what kind of haul you can get for Taylor.

I’ve said this a million times.. I’m a businessman when it comes to dynasty. Not one player of mine is ever “off-limits”. I’m always in the business of making a profit when the opportunity presents itself. With that being said, don't trade Jonathan Taylor just for the sake of making a trade. We all have one of those guys in our leagues haha. Shop Taylor to see what you can get, and don’t be afraid to pull the trigger. You’re not married to these guys, and everything can change with a snap of the finger, ask Christian McCaffrey owners. There is absolutely nothing wrong with keeping Taylor, as he should be a steady top 3-5 dynasty RB for the next few years. However if someone offers you the moon, smash the accept button.