This past WR draft class has sparked quite a bit of controversy this offseason. If you asked ten different dynasty analysts who their favorite rookie WR was, you could have received four or more different answers. Even the tier lines weren’t always drawn the same with prospects like Skyy Moore and Chris Olave falling into different tiers for different drafters. This year’s class was the ultimate “go get your guy” draft class. Garrett Wilson may not have been the most frequent answer for the top WR but he was in most top 3 lists. In my own personal rankings Wilson was the top WR pre draft and remained there for me post draft. I’ll admit that I was lower on Drake London than the consensus and feel I may have been wrong in my evaluation of him. Nevertheless, Garrett Wilson was going to be a prospect to watch this season, that much is for sure.

While in college, Garrett Wilson had to compete for targets in an offense loaded in NFL talent at the WR position. A position group so talented that Jameson Williams had to go to Alabama just to get some playing time. Garrett Wilson jumps off the tape with some of his incredible concentration catches. Beyond just his ability to make some acrobatic catches, Wilson’s route running was NFL ready before he ever heard his name called at NFL Draft. Every skill set you need to be a successful NFL WR, Garrett Wilson has it. NFL scouts felt the same about his tape as dynasty managers did and Garrett Wilson was drafted 10th overall to the Jets, a team hoping to be ascending with all of their other young talent on the roster.

We got to see that translate to the next level in Week 2 as Garrett Wilson was a featured piece to the Jets offense as they pulled out a miraculous win over the Cleveland Browns. Garrett Wilson made big plays in critical moments of the game including the game winning touchdown late in the 4th quarter. The Jets offensive coaches had mentioned after Week 1 that they wanted to get Wilson more involved in the offense. After the result that the Jets got, I imagine they will be looking to implement that gameplan again going forward. Wilson showed off everything we saw on tape from his route running, to his ability to understand coverage and even making contested catches despite the smaller frame. 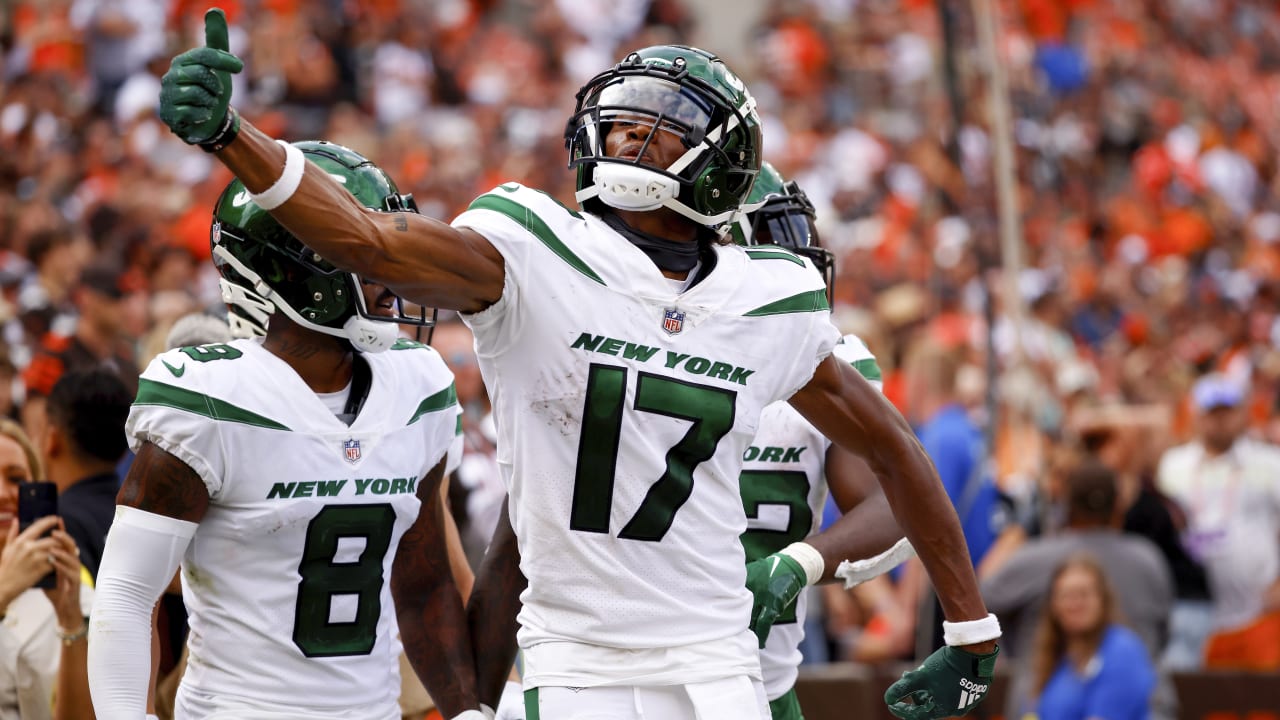 This Jets offense has invested quite a bit of money and draft capital in trying to build around Zach Wilson. All these pieces come at a cost of target share for any one of them. Garrett Wilson may always have a ceiling to his volume in an offense with this many moving pieces. Elijah Moore being another young WR that had a strong finish to last season is likely chief among them. If it were only Moore that would be one thing but the Jets also have veteran WR Corey Davis, two veteran TEs in Uzomah and Conklin and two RBs that are both capable of catching the ball out of the backfield. While no one player in that group crushes in target share, the sum of their targets will limit how much of the passing game work will go to Garrett Wilson.

The QB situation in New York is also riddled with a bit of uncertainty and doubt in both the short term and the long term. In the short term the Jets have former Super Bowl QB Joe Flacco until Zach Wilson recovers fully from an injury suffered in the preseason. While Joe Flacco has shown himself to be serviceable, nobody expects him to throw for 400 plus yards and 4 TDs. This will also limit the ceiling in the present. When Zach Wilson returns, he will have to show that he has made a step up from previous seasons. If Zach Wilson does not then Garrett Wilson is likely to have another young QB next season or a journeyman veteran to bridge the gap. Granted, if Zach Wilson makes a leap in his second year then all needles point up for all players on the Jets’ offense, but the situation is at the present time still uncertain.

We have seen one week wonders in the past, immediately flipping a player drafted in the 1st round one year for two 1st rounders in the following seasons is a fantastic return on your initial investment and immediately liquidates a profitable asset for your dynasty team. Even in the case that Wilson continues to succeed, if those picks are traded for other players on the rise or used to pick players that ascend, you can still come out ahead.

It may be very tough to acquire Garrett Wilson at this point but I am buying or holding at this point. It is like gonna cost you either two 1sts or likely a decent player and a 1st. If I felt myself needing to rebuild, I would maybe use this as an opportunity to move an asset like CMC or Mike Evans straight up. The window to buy could completely close if he has one more big game so be aggressive if you do not have many shares of Garrett Wilson in your dynasty portfolio so if you want to join the ride you better jump on now.