Elijah Moore is in his second year out of Ole Miss. Moore was a 2nd round pick, 34th overall in the 2021 NFL draft by the New York Jets. There’s no doubting Elijah Moore is a talented football player; but is he an asset you’d want on your roster? The dilemma: Buy or Sell Elijah Moore?

Elijah Moore flashed his big play ability in 2021 and caught TD passes from three different Jets signal callers. His season was cut short by a quad injury that landed him on IR that then was followed by a trip to the COVID-19 list. Moore burst onto the scene in week 8 in the Jets win against the Cincinnati Bengals, doing so with the legend of Mike White at QB. From weeks 8-13 in 2021, Moore was the WR4 across fantasy football behind only Justin Jefferson, Keenan Allen, and Cooper Kupp. Moore accomplished this feat with the likes of Joe Flacco and Mike White throwing him the ball before Zach Wilson’s return in week 13 vs. Houston. During this stretch, Moore played a majority of his snaps on the outside instead of the slot, showing his penchant for big air yards per target and overall big play ability. 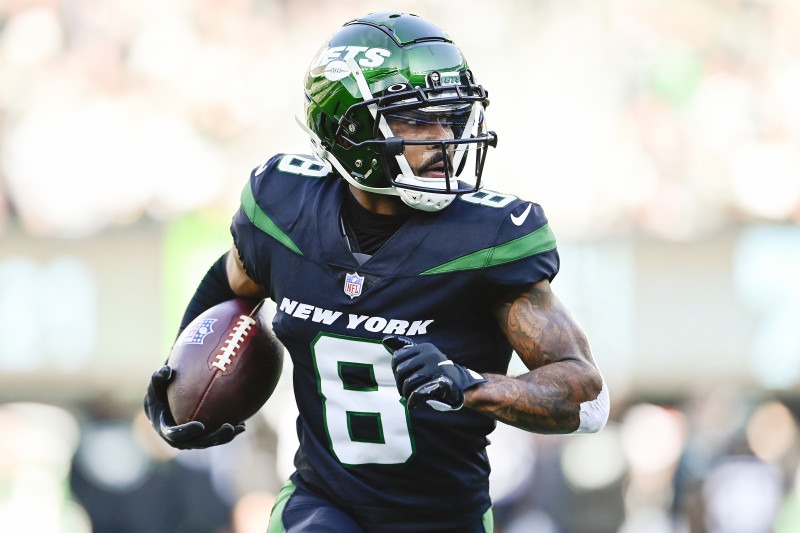 Elijah Moore missed six games in 2021. Durability has to be a cause for concern when a player is 5’10 180 and undersized for the role he’s being asked to play in this offensive scheme. Football is a physical game however and players rarely escape a season unscathed. The bigger case for selling is Moore’s perceived value across the dynasty landscape. He’s going as WR15 in startups. The dynasty community is giddy with the potential flashed in weeks 8-13, I however fear that drafting Moore or acquiring him at that price point is getting him at his ceiling.

I’m going with a verdict of sell because Elijah Moore is being overvalued by the dynasty community at large.When there is a massively shared opinion like the one that Elijah Moore is a buy, this creates a market where a GM with Moore can capitalize on his perceived value. If I’m an owner of Moore, I’m putting him on the market and seeing if I can acquire players like Calvin Ridley, Michael Pittman, DJ Moore, or Keenan Allen. Those targets I can trade Moore and get that player along with a 1st in 2022/2023, or multiple 2nds. If you’re not interested in the picks, you could potentially move him straight up for a player like Diontae Johnson or DK Metcalf.