The term gadget player is not often viewed as something positive.  Upon hearing that description, people might think of words like distraction, scheme or trick for example; but rarely do they think of the word skill.  Last season, we may have seen the best “gadget” season of all time from a receiver.  Deebo Samuel was truly a marvel to watch in 2021.  He not only overcame every expectation last season; he utterly destroyed them.

In the history of the league, I can’t think of a season for a player quite like last year was for Deebo Samuel.  Even as the season wore on and defenses knew what he was capable of, they still couldn’t contain him.  Deebo was everywhere and a threat at any angle.  But can the Do It All receiver from South Carolina do it all moving forward?

Truthfully, I didn’t watch many 49er games last season.  But, of the handful I did watch, there weren’t many players throughout the entire season that were more fun to watch than Deebo.  Here’s the problem though: I began to predict what the coach had planned for him.  Now, I’m no fortune teller or even an expert, but if I could guess the play before it happened numerous times, how long until smarter coaches than me catch on?  The saving grace is that even when I knew it was going to happen, Deebo overcame with his blinding speed and natural given power.  I wonder how long he can rely on skill alone.

There seems to be a boys club in the National Football League.  The coaching tree of Mike Shanahan has forever linked many names together, but none more notable than Sean McVay, Matt LaFleur and Kyle Shanahan.  Fans and experts alike swoon at the minds of these young coaches.  In many ways, they are incredible; in other ways, I’ll never understand a guy like Kyle Shanahan.  For whatever reason, he simply does not like to go with the same guy very often.  We’ve seen it at running back, obviously, but he’s also never had the same leading wide receiver in any season as a head coach in the NFL.  There may be reasons like injury that have contributed, but I have a hard time trusting Shanahan to have a player who is “his guy” other than George Kittle.  Despite his success, it is not a given that Deebo sees that same level moving forward, even though he should.  It may seem unlikely, but there’s a history there of inconsistency. 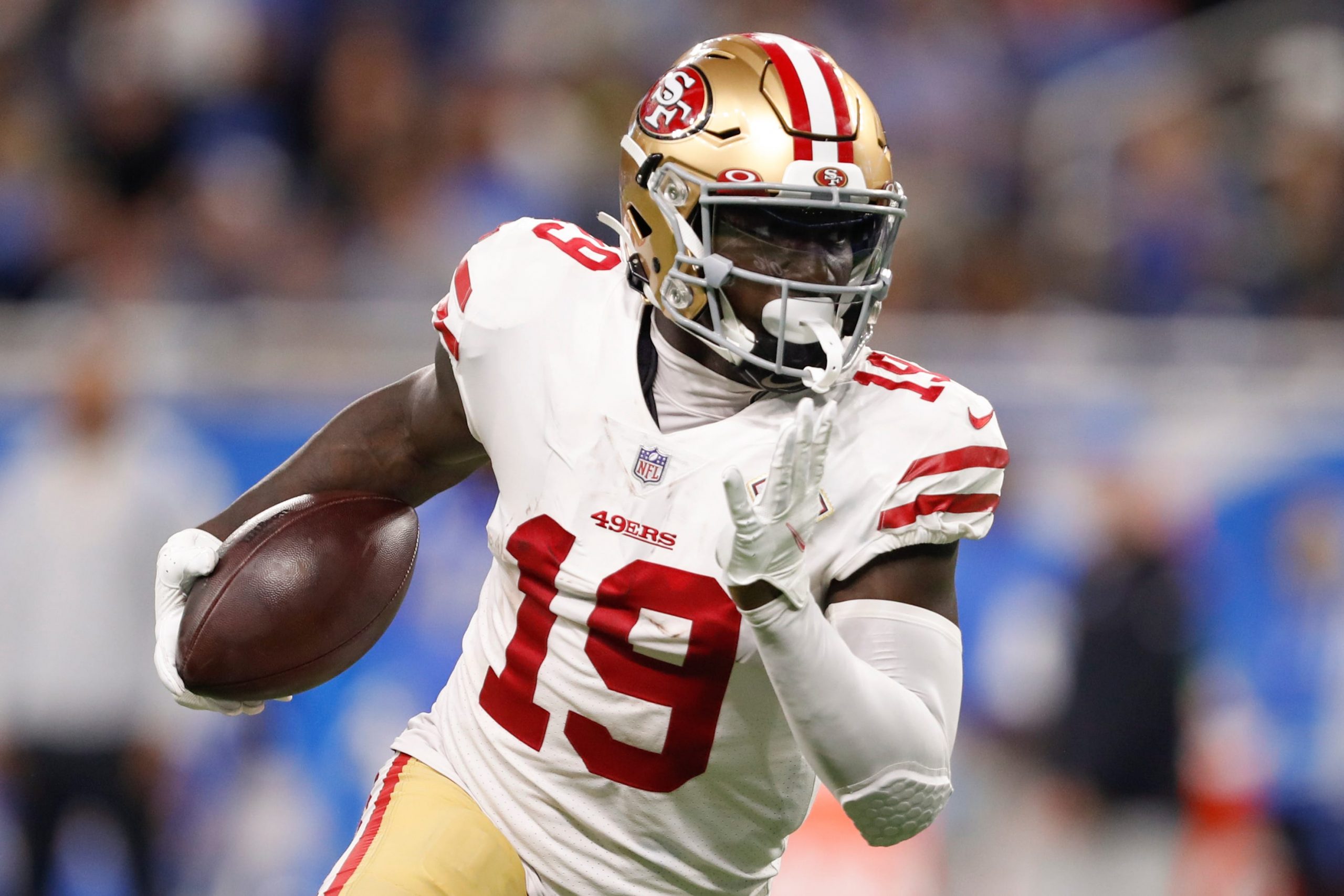 I alluded to it earlier, but there aren’t many players in the league who are truly unique.  Each player brings something different to the game, but it’s not hard to find better or worse versions of each player.  Deebo Samuel, however, doesn’t share that comparison.  At only 26, he’s only begun to scratch the surface of showing all he can do.  Knowing this, it’s very difficult to not get FOMO in dynasty for Deebo Samuel.

Jack of All Trades

Not to beat a dead horse, but in case you didn’t know, Deebo does it all.  No wide receiver lined up at different spots last year than Deebo.  His effect on defensive schemes cannot be underestimated in the slightest.  His 365 rushing yards were over three times higher than the next closest wide receiver and his 8 rushing touchdowns landed him in a tie for 10th place among any position.  He even threw for a touchdown this season.  He could hit you from anywhere and that equaled a lot of fantasy points.

In dynasty, one of the names that is truly polarizing is Trey Lance.  Jimmy Garoppolo is all but out the door and the player whom management traded three first round picks for is taking over next year.  Ordinarily this would cause concern for the value of wide receivers, but this is one instance where it can only make things better for Deebo.  Samuel may not be Lance’s favorite right away, and his accuracy may be less than Jimmy G, but the threat for Lance to run cannot be understated.  Now with one more element for defenses to focus on, I can’t even imagine all the different ways Deebo can succeed.  Predictability of plays should go way down and good luck containing him.

I can’t say enough about how impressed I was with Deebo Samuel last season.  He was a treat in fantasy, but even just to watch, he was so invigorating.  Everything is looking upward in San Francisco.  The holes on the team are virtually absent and they should contend once again; this time with even more weight.  And, when looking at the team for fantasy gold, much less in dynasty, no one holds as much value as Deebo Samuel.

The only worry I have is if it can be repeated.  What happened last season hasn’t been done before in my mind, and the likelihood to succeed or fail is something to consider.  Before last season, Deebo only averaged one rush attempt per game, but after the success last season, I don’t see that regressing.  In my gut, I feel as though Deebo will get even better next year, but I just don’t think it’ll last as long as we want in dynasty. Buy him for now, then turn around and sell him next season at an even greater profit.

..with Intent to Sell