Tight end is probably the hardest position to find value in fantasy football.  Whether it be dynasty or redraft, finding gold behind the top handful at the position is a straight up scarcity.  Everyone knows that Mark Andrews and Travis Kelce reign supreme in redraft.  And in dynasty, everyone is buying Kyle Pitts, but what to do after that?  One of the names pondered often is Dalton Schultz.  Walk with me through this thought process.

Tight end, as long as I can remember, has been dominated by a dear few.  And of those few each year, the same names at the top get even fewer.  It’s the nature of the position.  At running back and wide receiver, the big responsibility is to score, whereas there are many more blocking responsibilities for tight ends.  Finding one that can score so well is something to be cherished, but can Dalton Schultz stay near the top?  It’s hard to hold on to tight ends when we can make a profit due to last season’s success.

Players become free agents all the time, but in recent years, no position in fantasy football has fared poorer in free agency than that of the tight end.  The consensus top available tight end each year in the last five has significantly regressed.  From Hunter Henry, to Austin Hooper, to Jared Cook, to Trey Burton and Martellus Bennett, each of their new homes did not shelter their fantasy managers in the slightest.  Dallas has arguably the best offensive line in the league, but with the free agents and cap issues they have, who knows what next season could bring for Schultz even in Dallas?

There’s no fooling anyone if someone says that Dalton Schultz was anything less than magnificent last season.  If you didn’t already know, the product of Stanford finished third in PPR among all tight ends; trailing only Mark Andrews and Travis Kelce respectively.  The problem is that Michael Gallup was injured half the season.  No matter if Dallas resigns Gallup or not, Dalton won’t be the third option; he’ll in theory move back to the forth.  The fantasy value can’t hold the same weight as before. 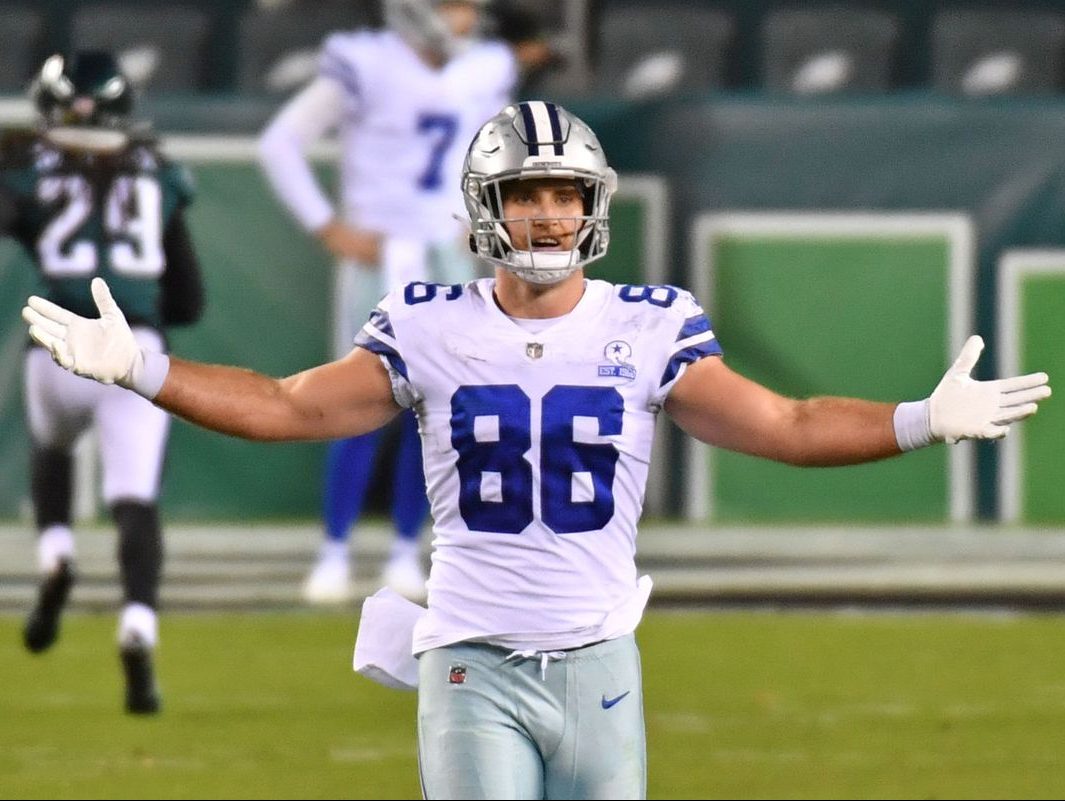 If you’re foolish enough into thinking you can just find a good option at tight end for pennies, I’d call your bluff.  The fact is that Dalton Schultz is only 25 and playing at a top level.  Last season’s 104 targets were no joke, matching teammate Amari Cooper.  He also finished with one less than the lead in receiving touchdowns at tight end in 2021.  I’m not sure what else we can ask for at the least valuable fantasy skilled position.

While it is true that Dalton Schultz’s production went down once Michael Gallup returned, from week 10 on, Dalton still ranked as the 5th best tight end in PPR.  Even more than that, the season prior, as a sophomore, he was still amazing.  He finished 11th at only 24 years old.  That year, he also caught four more targets than Gallup and only one less touchdown, despite having 16 less targets.  With more experience and trust from Dak, the sky is the limit for Schultz.  And in case that wasn’t enough, last season he led his team in touchdowns and only had less targets than CeeDee Lamb.

When making a decision, the best metric is to compare by position, so let’s compare Dalton Schultz with other tight ends.  Two seasons ago, Schultz was still a big deal.  In only his second season he had just 2.8 PPR points less than Rob Gronkowski.  Last season, like I already said, he was even better; placing third in PPR.  He did this while having just the sixth most targets among tight ends.  And while more coveted names like Mark Andrews and Kyle Pitts led their team in targets, Schultz had success without needing to monopolize his quarterback.  At 25, with only two full time seasons under his belt, the argument can be made that the value can only go up for Dalton Schultz.

It’s funny in a way.  The Dallas Cowboys have the tendency to overrate value in fantasy.  It’s not that the players aren’t good by any means.  I’m only saying that if you take a player like CeeDee Lamb and place him anywhere else, people instantly become more objectifying when assessing his value.  The opposite is true for Dalton Schultz.  For some reason, his Dallas Cowboys status card isn’t ringing the same as his teammates for fantasy managers.  And for whatever reason, many are missing out on the value.

Tight end is truly perplexing.  Where should we draft them; how much should we trade for them; when should we cut them loose?  And past the elite tier, the questions are even harder to ascertain.  Drafted in the 4th round, Dalton Schultz hasn’t come into the fantasy world with that powerful name; he’s had to work hard to get to where he is.  In some ways, I trust a late round or undrafted player more than one that has the team investment.  But, we’re talking about your team investment here.  Invest in Schultz.