The 2021 National Football League season gave us plenty of intrigue, like any other year, but something magical happened.  We may have seen the best single season ever from a wide receiver.  If you asked who would do this, virtually no one would have predicted the player to be Cooper Kupp of the Los Angeles Rams.

What a historic season.  191 targets; 145 receptions; 1947 yards; 16 touchdowns; and 114.5 yards per game.  It’s like something out of a video game.  Add to that an Offensive Player of the Year Award and Superbowl MVP.  Can he repeat anything close to this standard of excellence again?  The Cooper Kupp situation is truly perplexing.

If I were to gamble on the likelihood of Cooper Kupp repeating anything close to what he did last season, I wouldn’t even bet a dollar.  As amazing as he is, he’s done something almost no one has and something he hasn’t even flirted with before in his career.  With the exception of this year, he has crossed 1000 yards and double digit touchdowns only once.  Before last season, his average yards per game sits at 66.5.

No better change happened last year for Cooper Kupp than inheriting Matthew Stafford for Jared Goff.  The bad news is that negative changes could unfold this off season as well.  Even with injuries and free agency, Andrew Whitworth, Aaron Donald and even Sean McVay have hinted at retirement.  Now, I don’t know how likely some of those may be, but it threatens the gold that Kupp puts out to fantasy owners. 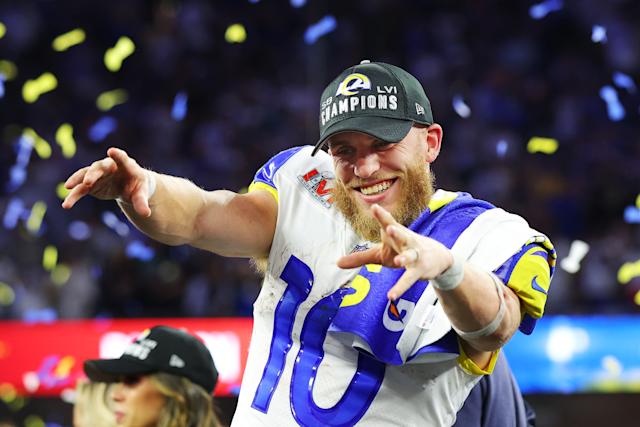 We all know the wide receiver position lasts the second longest in football, after only the quarterback.  At only 28, Kupp may be uncorking the best of what is yet to come for years.  Surrounded by a cast most of the league covets, last year’s WR1 is incredible.  Can we pass up on gaining this phenom and watching him succeed elsewhere?

No matter how involved McVay tries to get the rest of this offense, no one comes close to bringing it like Cooper Kupp.  Despite teammates dropping like flies, Kupp took the opportunities thrown to him better than anyone could predict. No one throws more to wide receivers in the league than the Rams and the Rams throw to no one more than Kupp.  The slot receiver is nothing short of magical and target share is everything.

I think the biggest disservice we do to ourselves in the dynasty community is the travesty of ageism.  The common thread for owners is to always salivate at the newest young pup and abandon our aging studs.  Cooper Kupp may be 28, but at his position, that’s prime time.  Countless receivers have shone past that point.  Even the great Randy Moss and Marvin Harrison didn’t have their best seasons until 30.

If we fool ourselves into thinking last season is repeatable, we’re not being fair to Cooper Kupp.  Honestly, I’ve loved him since he came into the league and I try desperately to get him in every draft I do, whether that be dynasty or not.  The talent is undeniable and he’s one that people overlook; seemingly not remembering or realizing just how good he is.  His name doesn’t ring like others at his level for whatever reason.

Here’s the problem: it’s not sustainable.  Even though I want him on every team I own, I just can’t afford it.  He was an absolute steal every year before he showed what he was capable of.  A discount since 2017, the world is now aware of how valuable the pass catcher from East Washington is.  And for that reason, it’s time to invest elsewhere.  It pains me to say it, and although I don’t want to, I have to take advantage of the profit.