In dynasty football, it is important to not only look at talent, but at shelf life as well.  Aside from the quarterback, the wide receiver has the longest average playing career of the skilled positions.  Although the running back, tight end and quarterback positions are pretty much a single player dominated position on a team, wide receiver is the one that offers the greatest variety to choose from.  It is completely unheard of to run less than two receivers in the NFL, but oftentimes, teams will run three and even four receiver sets.  But with so many to choose from, finding the ones at the top is paramount.  CeeDee Lamb, especially in dynasty, is one such player.  But how near the top is he?

It’s true that CeeDee Lamb ticks many of the boxes in not only a real life talent at his position, but also in fantasy football.  You have to wonder, however, if he’s worth the price the community has tagged him with.  One of the most expensive wide receivers in fantasy circles, is his price point worth the investment required to see him on your squad?  The talent is there, but is he worth shelling out the big bucks to roster?

CeeDee Lamb came on the scene two seasons ago and took the league by storm.  Despite playing behind Amari Cooper, he quickly earned the trust of coach and quarterback alike.  Even as the number two in Dallas, he finished 24th in targets.  And as a 21 year old, was second among rookies; behind only Justin Jefferson.  But, the underlying receiving numbers can be quite deceptive, even if we look at last season.

Although he was the 23rd most targeted wide receiver in the National Football League in 2021, his catch rate landed him 45th at his position and 118th among all players.  In fantasy, there are no points for targets in almost any format, so despite so much attention, the points gathered by managers were much more minimal than they had hoped for.  Catching less than two thirds of the balls thrown your way just doesn’t cut it when you are a premier wide receiver and the top option for many teams.

Add to that the fact that he did not score a touchdown his first seven games last season, and only two touchdowns in his first ten, the situation was truly maddening in 2021.  It also infuriated managers to see CeeDee Lamb have less than five catches in half of the games played.  And while he did improve his rate as the year went on, the weeks lost before then cost many managers a chance at playoff contention.  The points come fantasy playoff time are the most important, but you have to get there first.  The inconsistency from CeeDee Lamb is not something that it easily ignored.

There are a few players in the NFL who are hindered with ball control issues.  Some are more notable than others, but surprising to many, CeeDee Lamb is one of these players.  The consistency mentioned earlier is truly troubling, but what he did after he was able to catch the ball is almost more concerning.

In his freshman season, CeeDee Lamb committed eight drops.  This was slightly concerning, but as a rookie, it can happen.  Much to the dismay of Lamb owners, this number improved zero percent, as CeeDee had eight drops again in the same amount of games.  Again, in fantasy it only matters what you do once you catch it, and eight drops in back to back seasons has to raise eyebrows; only not in the way you want.

It’s also very alarming to know that when he was targeted, CeeDee Lamb was partially responsible for interceptions.  Of all the interceptions that Dak Prescott threw last season, 60% of them were committed when Lamb was the target.  While we can’t blame the entirety of the situation on CeeDee, he’s at least partly to blame.  And while it wouldn’t have hurt your team if you didn’t own Prescott, it’s just another instance where CeeDee Lamb was missing key points to help your fantasy team succeed last season. 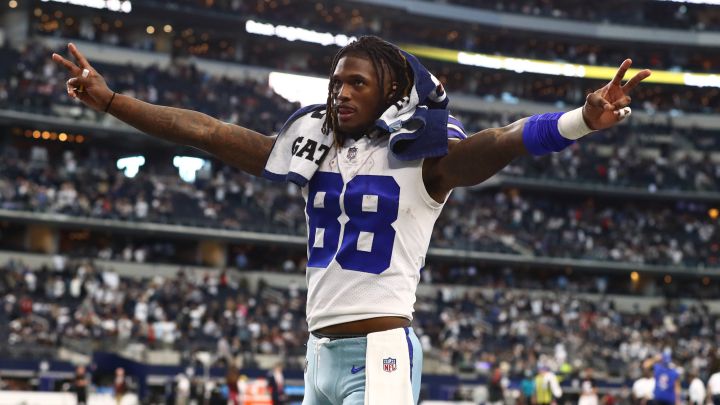 As mentioned before, there are plenty of wide receivers in the National Football League, but not many that can lead your team to the championship.  In many ways, CeeDee Lamb is every bit what you look for in a true fantasy alpha.  The target share is there; the age is great and he has the quarterback.  Dak Prescott is one who is great in his own right and he’s also not going anywhere.  Can we really afford to miss out on this phenom out of Oklahoma?  And as I write this, Lamb is still only 22 years old.

While many saw last season as somewhat of a disappointment, if you look at the numbers, CeeDee Lamb improved on virtually every obvious statistic.  More importantly, the numbers for the other two top receivers for the Cowboys, in Amari Cooper and Michael Gallup greatly regressed.  The Dallas Cowboys organization, from management to personnel, has clearly shown faith and trust in the 17th overall pick.

From his rookie season to last year, CeeDee Lamb’s targets, receptions, receiving touchdowns and yards per target all increased.  While many managers were not as pleased with his improvement as they had hoped, it is undeniable that improvement was there.  Add to that Dak Prescott has improved in many ways since Lamb came to the team, and it’s all looking up.  It’s also important to mention that the Cowboys’ work on the ground has taken a hit as of late.  So the receiving game in Dallas is all that more important moving forward; with Lamb as priority.

Lastly, as his ball control hasn’t been great, some underlying metrics have improved; many of them being key ones you look for.  In 2021, CeeDee Lamb increased his yards after catch by 42%.  This is even more impressive when you consider he was used even more on first downs, when teams expect the pass that much more.  And while it’s true he had the same amount of drops as he did the year before, his drop rate improved.  Perhaps most impressive is that he amazingly broke four times the amount of tackles last year than he did in his rookie season, leading to zero fumbles.

The fact on most people’s minds to buy, I’m certain, is the change coming to the receivers in Dallas.  While free agent Michael Gallup is certainly to be re-signed, I don’t think the Cowboys will want to lose free agent Dalton Schultz either.  If either leaves, the doors open for CeeDee, but even more importantly, I don’t believe there is even a slight chance the team keeps Amari Cooper.  The impending cutting of Cooper is virtually completely due to the insane contract signed in 2020.  Jerry Jones and company can save $20 million in dead money on the cap if they cut him loose now.  Even more absurdly, they can save $38 million dollars more over the next two years.

With the exodus of Cooper, based on last season alone, this frees up his 104 targets to other receivers in Dallas.  If we do a little math, based on what CeeDee did with his targets last season, the results could be very good for Lamb owners.  With no improvement to his game, if Lamb only got 25% of Cooper’s targets thrown his way and added only two extra touchdowns, he’d have an extra 44 points in PPR formats.  While that may not seem amazing, this is accounting for no improvement from what he did last season.  I truly believe he’ll improve moving forward and certainly gather a greater share than just 25% of the vacated targets from last season.

This is one of the most truly perplexing dilemmas I’ve considered this season.  Had you asked me at the beginning of the off season, the solution was much more simple.  Due to the reasons to sell that I mentioned earlier, the decision to buy as a non-owner would have been obvious.  I could have made a great argument to sell as well.  Lamb was still being viewed as highly as the third best option at wide receiver in dynasty for many.  Where we sit in the off season now, however, isn’t so simple.

My rankings have been adjusted most greatly due to the impending release of Amari Cooper.  In recent memory, I can only think of one player who regressed once taking over as the de facto number one, in JuJu Smith-Schuster.  I had CeeDee Lamb, in my personal ranks at number 7.  Now, with this recent development, only LSU teammates Ja’Marr Chase and Justin Jefferson are more appealing to me.

The true dilemma is that if I were a Lamb owner, there is no reasonable price that would deem him to be sold.  On the flip side, as much as I’d want him, as a non-owner, I could not in good conscience buy him at his current market share.  As helpful as it is not, the answer is nothing other than to keep him.  Unless the clouds have opened and the price has shifted dramatically in your favor, you have to grit your teeth and stay put.