Carson Wentz was the 2nd overall pick in the 2016 draft. The Eagles traded up to select him, marking the first of 3 occasions where a team would trade for his services. Carson Wentz appears to be the closest thing there is to a cat in the NFL. This is his 3rd life now. I know we talk football here but I think the phrase “3 strikes and you’re out” is pretty apropos given the circumstance for the North Dakota state product. Carson Wentz showed progress as a rookie, in 2017 he played in 13 games before tearing his ACL vs. the Rams, the team that passed on him at #1 the previous year to select Cal QB Jared Goff. This was the last time we saw MVP caliber football from Carson Wentz. Since then he’s been wildly inconsistent, tortured by his own fans, benched for rookie QB Jalen hurts and subsequently traded to the Indianapolis Colts the following season to reunite with the OC that had him playing MVP caliber football, Frank Reich. Now a year into that experiment it’s been announced he has been dealt to the newly named Washington Commanders. So the dilemma is clear, on his 3rd team are we buying or selling Carson Wentz?

This is the final stand for Carson Wentz, as this article previously stated it’s his 3rd shot at being a starting QB. The Commanders are desperate for a competent starting QB and I believe he’ll be given a couple of years leash. After all, this is the same franchise that rolled out Taylor Heineke for an entire season as their plan B because their plan A was a 39 year old QB they signed as a free agent who is a NFL journeyman. In short, this is the best the commanders believe they can do. Giving up 2 years of picks makes it seem to me that they’ve done their version of due diligence and they will allow Carson to sink or swim.

I do believe he has good skill players around him. Terry McLaurin, Antonio Gibson, Curtis Samuel, Logan Thomas, and Dyami Brown and John Bates isn’t a bad skill set group. I believe Ron Rivera knows this is the final straw, and as a coach on his second go around, he knows he’s now attached to Carson Wentz. I believe he will do whatever it takes to put Carson in a position to succeed. He’s also familiar with the division and he can come in and make them more competitive than they were last year. 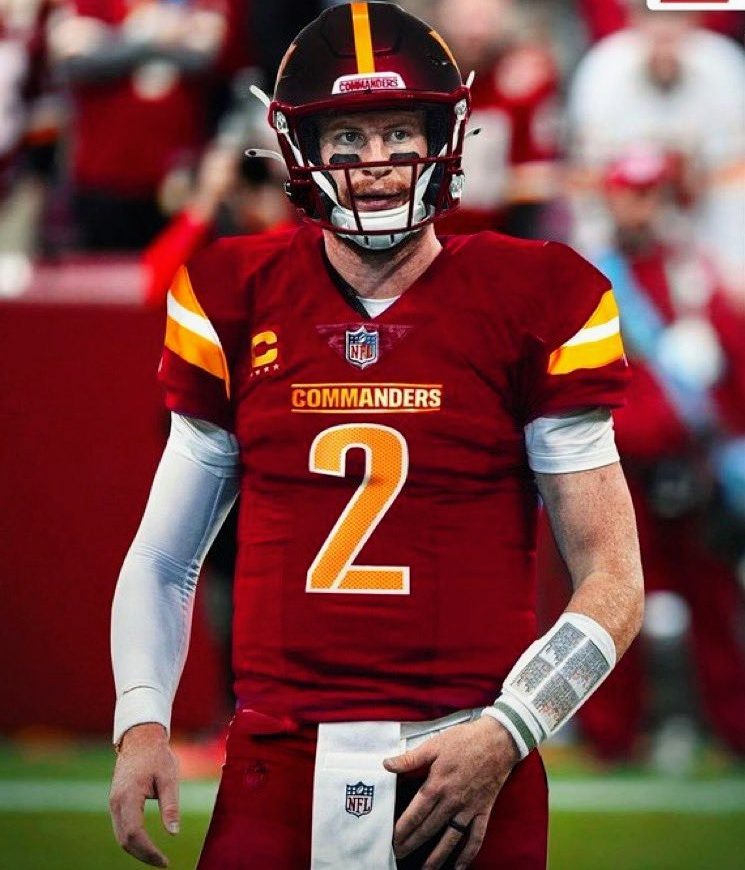 I believe these reasons are more blatantly obvious. He’s been turnover prone his last few years as a QB and the commanders track record from recent years at QB has also shown the propensity to make poor decisions with the ball. We’ll have to see if this is a coaching/scheme issue or if all of the QBs playing within the system just aren’t good. His offensive line will be a downgrade, meaning the run game won’t be as efficient to take the pressure off of Wentz during games. It’s going to rest on his shoulders to will his team to win some games and recently when he’s been asked to do so, he hasn’t been up to snuff.

I hold the caveat that if you’re in a 1 QB league, you don’t need Carson Wentz. Assuming you’re playing in a superflex league which is the more popular format, I think you buy Carson Wentz. His value is in the basement but we know he’s going to be a starting QB for 2 seasons. With the value the QB position holds in these leagues, you can probably flip an early 3rd round pick in this year or next year’s draft and attach it to a younger WR/RB prospect and it should get the job done. Maybe shipping off Ronald Jones or laviska/DJ Chark and a 3 would interest a Carson Wentz owner. He’s a starting QB whose value is in the basement. I think this is the time you buy and just take the 2 years of production over the lottery tickets on your bench.