I find myself looking at the results from this past week and things that we could not have seen coming. It started on Thursday with the most improbable win for Baker Mayfield and the Rams, and continued onward through Sunday. Perhaps one of the most surprising things was week 1 3rd string quarterback Brock Purdy facing off against Tom Brady and the Buccaneers and absolutely smoking them. The greatest quarterback of all time getting completely dusted by a rookie that a casual fan would have not even known his name back in August. What are we doing with Purdy in our dynasty leagues now though is the question. Time to break down another dynasty dilemma.

The biggest reason to buy might just be the game film we just watched. The Buccaneers defense is not a joke and Purdy looked calm, cool and collected back there as he methodically moved the ball on them. Some of it was simple stuff, evading the rush and checking it down to the running back. It does make that plan better with the running back is Christian McCaffrey but it was still impressive how quickly he was making the decisions. Purdy looked like a seasoned vet out on the field. Beyond just the mental aspect, Purdy showed some incredible accuracy on several throws and showed some mobility even picking up a rushing touchdown.

It is quite clear why the 49ers have been singing the praises of Purdy since he arrived. They have seen this guy in practice every week and were not worried about their chances when Jimmy Garoppolo was injured. It is also a system that has frequently gotten the best out of quarterbacks and if he can steal the starting job from Lance and/or Garoppolo next year, he could become a weekly starter in all your SuperFlex leagues that you acquired for quite cheap compared to the normal price of young starting QBs in dynasty. That window to buy will not stay open long if he becomes the guy, his price tag will become too much to trade for. 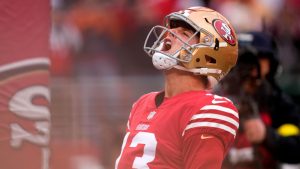 Let’s just start with the elephant in the room. That quarterback room he is in is a crowded one. It may be difficult for him to become the long term starter for the 49ers. Garoppolo is likely to be gone but the 49ers invested quite heavily in Trey Lance this offseason. NFL teams do not like using multiple 1st round picks on a backup QB. If Lance is even on par with Purdy, he will be the starter. Perhaps there is a chance they move Purdy in the offseason to a QB needy team but how successful he would be in another offense is unknown at this point. As I have stated before, the 49ers offense is extremely QB friendly.

This game was also his first time with a game plan designed for him specifically going into a game. The Buccaneers had minimal tape and information to work with going into the game. Are we sure he will perform like this a few weeks from now when teams begin to pick out his strengths and take those things away from him? It is much easier to be the guy when the opponent is not prepared for you. Let’s see how he plays when some of these defenses start scheming stuff against him.

Finally we have to consider pedigree. Quarterbacks selected outside of the 1st round have a truly abysmal hit rate. For every Tom Brady or Dak Prescott, there are a million Drew Lock’s and Davis Mills in the league, and those guys were taken much earlier than Purdy. Brock Purdy earned the title of Mr. Irrelevant after being the last player drafted in the NFL Draft this past spring. If his skill set was elite this would have never happened. At this time last year people were getting late 1st round picks for Davis Mills based on a small sample of production. Do not fall for the fool’s gold, sell now or soon as the season is over for all those that have passed the deadline.

While as a fan of the game, I am loving to see what he is doing, I would use this window to flip him. I want at least a 2nd in a SuperFlex league to make the move though. If he has another big game or two, I may try to find a 1st for him. His 2023 outlook is murky at the very best and coupled with his draft capital does not inspire me for his long term outlook. I could be wrong here but I feel I would be happy to make a profit on a guy I likely only spent a late round flier on in my rookie draft or some amount of FAAB. Being able to turn that into some reasonable draft capital is a safe move even if it lacks the upside of holding onto him. 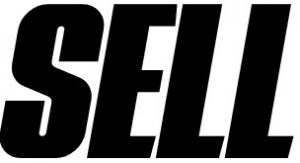