Antonio Gibson was a very interesting prospect coming into the NFL. Believe it or not, he actually started his college career off as a wide receiver! He played a lot of special teams snaps, and ran many routes as a receiver before eventually starting to get some rushing attempts as well. Gibson has shown that he can be great both as a receiver and a rusher, giving him a very enticing draft profile. Teams are finding an increasing use for hybrid RB/WR type players in today’s NFL. Players like Deebo Samuel, Christian McCaffrey, D’Andre Swift and Austin Ekeler are some of the players that are used heavily in both the passing game AND the running game. Players like these are especially valuable in PPR leagues.

How has he fared in the NFL so far:

In Gibson’s first season, he ran for 795 yards and 11 touchdowns, and added 247 yards through the air. Gibson was a bit inconsistent in his rookie year-finishing 18th in total rushing yards among running backs. In his second year, he improved on the ground and rushed for 1037 yards and 7 touchdowns, and added 294 yards and 3 touchdowns through the air. He capped the season off with a stellar performance where he rushed for 146 yards and a touchdown against the Giants in Week 18. Gibson is in an interesting position fantasy wise as there are a lot of reasons to both BUY and SELL him. I’m going to go through both sides of the argument and then the final verdict.

Gibson has proven that he can be a three-down back and saw a big increase in rushing attempts from 12.1 attempts per game in 2020 to 16.1 attempts per game in 2021. A big part of Gibson’s struggles were a product of terrible QB play. Washington’s struggles on offense as a whole had them playing in a negative game script a lot of the time. Last week the Commanders traded for Carson Wentz, and at this point, looks to be the starter come Week 1 of 2022. Although Wentz is not the greatest quarterback choice, he is definitely one of the best ones they’ve had in years. Wentz led the Eagles to a 11–2 record (before injury) back in 2017 and the Commanders are hoping for a fresh start that will help get him back to being the star that he once was. Gibson will have a lot more red zone opportunities- and rushing opportunities in general-if the offense as a whole is improved. The Commanders offense was 24th in the league in points per game (19.7) and in red zone attempts (50). Wentz led the Colts to being 10th in points per game (26.5) and 9th in red zone attempts (64) last year. Hopefully Wentz can revamp the offense which will greatly benefit Antonio Gibson. Gibson finished as the RB13 (PPR) in his rookie year and RB12 in 2021 and could very well make his way into the top-10 in 2022. 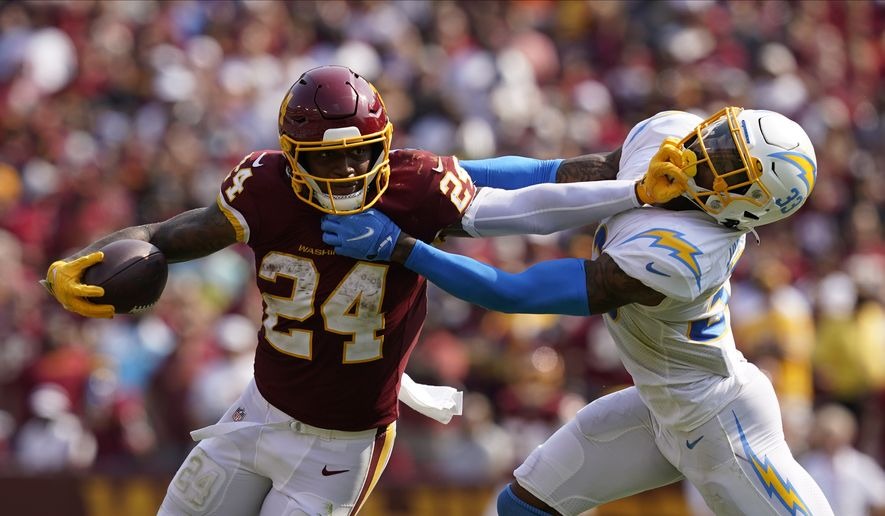 Gibson is a great player but he doesn’t get enough opportunities to shine. J.D. McKissic is used on a lot of the 3rd downs/passing downs and gets a lot of the receiving work. McKissic had 589 receiving yards in 2020, and was on pace for 614 receiving yards last year before missing the final 6 games of the season due to injury. In fantasy, PPR leagues especially, Gibson’s lack of opportunities in the receiving game is what is keeping him from being a true RB1. Last year, McKissic was second among running backs in fantasy points per opportunity at 1.27, whereas Gibson was 40th at 0.74. Gibson also has a problem with ball security. He had 5 dropped passes (tied for 6th among RB’s) and led all non-quarterbacks in total fumbles (6) and fumbles lost (4) last year.

2 weeks ago, J.D. McKissic agreed to a 2 year deal with the Buffalo Bills and Antonio Gibson RB1 season began! The fantasy football community was ecstatic thinking about Gibson getting a workhorse role. — Within 24 hours J.D. McKissic had a change of heart and took the exact same contract to return to the Commanders. Believe me, if McKissic did commit and sign with the Bills then this entire piece would have been about why Gibson is an absolute HUGE buy. However, I now think Antonio Gibson is a HOLD/possible sell (only for the right price) at this time. Holding him is my recommendation as he is a young and talented player and is clearly the lead back for the Commanders. With McKissic being back with the team for at least 2 more years, Gibson’s fantasy ceiling will be capped and hover around the high-end RB2/low end RB1 range. If you could sell him to someone who is willing to pay mid level RB1 value for him — do it, otherwise he is a firm HOLD.