There’s a lot of smack talk going on right now about Antonio Gibson. At the same time, there’s a lot of praise being sung for rookie, Brian Robinson. While Robinson is quite an intriguing player, it says a lot when people are suggesting to throw away Gibson, who this time last season, was one to hold on to for dynasty success. It’s always hard to know which way to go with certain players in fantasy football, especially in dynasty, and Antonio Gibson certainly isn’t making things easy. I find it very pressing to talk about the dynamic running back from Washington once again and decide what to do with him.

Should I stay or do I go now with Antonio Gibson?

Coach Ron Rivera once heralded Gibson as a player like Christian McCaffrey by saying, “He's a little bit bigger than Christian, but he's got a skill-set like Christian”. How things have changed. Needless to say, if we believed half of what’s being said online, Gibson is now less valuable than the waterboy. Cutting through the gibberish of beat reporters and coach speak can be taxing, but at some point we have to see the storm coming. Perhaps it’s time to get something for Gibson while we can.

Other Backs in the Room

The storm watch was alerted when J.D. McKissic was brought back in on a two year deal. Not only that, but it was for more money than some realize. If you didn’t know, McKissic is the 19th highest paid running back this year and that’s no small amount of change for a backup. And while it’s essential to have a good backup, the semi pricey deal, combined with his solidified role leaves many managers worrying about the role that Gibson will actually play in this offense moving forward.

It also doesn’t help Gibson’s case that Washington used their third pick to select the sixth running back off the board in this past draft in Brian Robinson. The Commanders certainly had many needs and using such a high pick on what many thought was one of the stronger parts of Washington’s roster can be a cause for concern for Gibson shareholders. It is true that Brian Robinson can’t do all the things Gibson can, but when you pair him with J.D. McKissic, does it leave Gibson expendable?

Last season, Antonio Gibson had a lot of difficulty keeping the ball in his hands. And when I say he had trouble, it may be an understatement. Of all non-quarterbacks, Gibson led the entire league in fumbles last season and of all that he fumbled, he only recovered two of them. And while fumbles can be forgiven to some extent at times, there is a limit of leniency in this regard. The Commanders ranked in the bottom half of the league in touchdowns in 2021, and in rushing touchdowns, it was even worse. With a hard enough time hitting paydirt as it is, can the Commanders really trust Gibson to hold on to the football moving forward?

While fumbling is bad enough, there’s a larger picture on display here. Antonio Gibson had a hard time while the ball was in the air too. While it’s true he had two more games played and more targets thrown his way last year than he did as a rookie, it is quite troublesome that his drop rate went up to a staggering 11.5%. He also dropped three times as many passes last season as he did in 2020. If these issues were to arise for a veteran, you could chalk it up to any number of reasons, but in only his second season, the ice is thin indeed for Antonio Gibson. 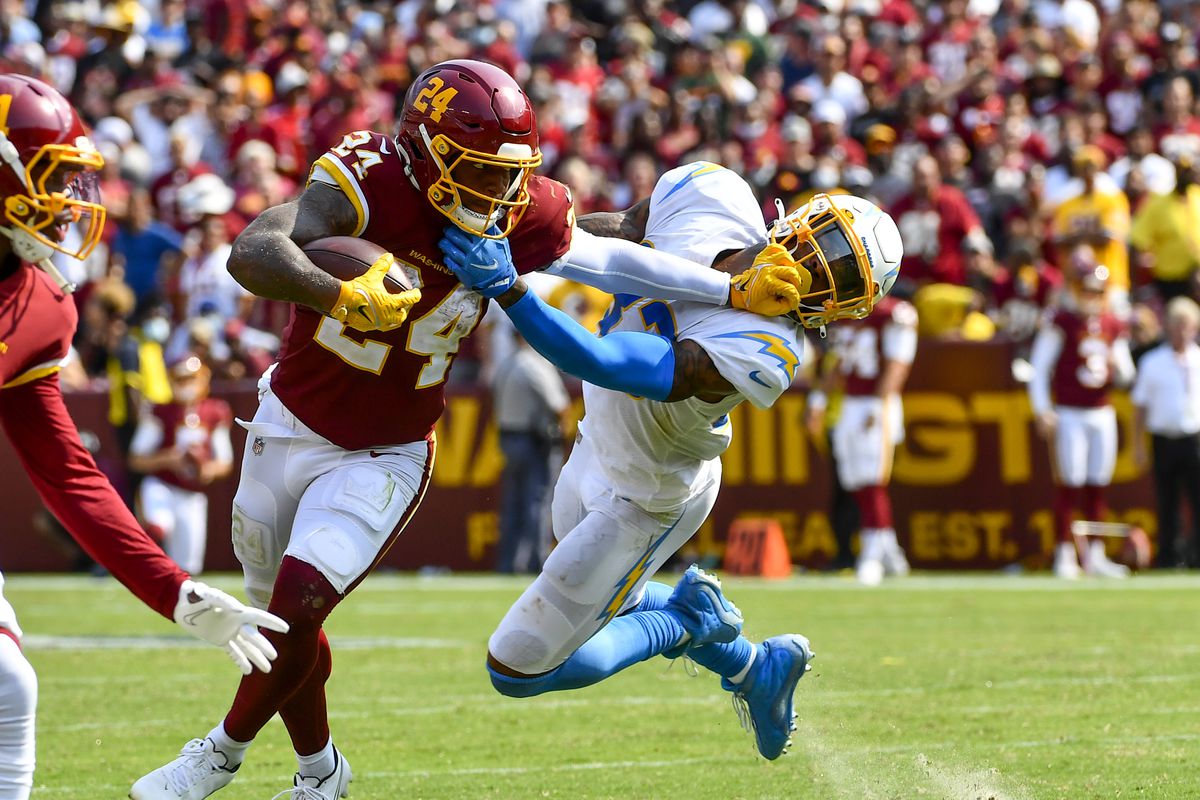 I’ve painted a pretty bleak picture for poor Antonio Gibson here, but there are always two sides to the story. After only two seasons in the NFL, there’s still a lot of tread left on those tires. Shouldn’t we kick them again before we just scrap them? And while he’s had his issues, which I’ve already gone over, no one can deny the talent that the man possesses. Many will lead you to believe it’s all over, but here’s some food for thought to make you wonder if the rocky waters are not so rocky after all.

Ron Rivera is one of the more stoic coaches in the league, but players and fans should know what he’s about. It may seem to many that Gibson’s days are numbered, but Rivera’s coaching history should prove otherwise. As a head coach, he’s only twice yielded less than 50% of his running backs’ total rushing attempts to his lead back. Once was when Jonathan Stewart was coming back from injury and once was in Gibson’s rookie season. And half the time, he gives his lead back 60% or more of the rushing opportunities. Rivera is not one to showcase a room of backs; instead, he focuses on one as the main guy. And while that can be scary if he’s moved on from Gibson, don’t fool yourself into thinking Robinson is ready to shoulder that kind of load.

But as impressive as he is among other running backs in the league, he is one of the most valuable players to his own team. He had the second most receiving touchdowns on his team, with only two less than Terry McLaurin. In fact, he accounted for almost one third of his team’s entire touchdown total in 2021. He also accounted for 74% of the Commanders’ running backs' red zone attempts. There aren’t many that can boast that level of importance in the red zone.

It’s pretty easy to fall victim to the narrative of “What have you done for me lately”, when it comes to the National Football League. Each year new superstars emerge to take the place of those who you thought had their position cemented for years to come. The situation in Washington is tense, make no mistake, but that doesn’t mean every doom and gloom report comes to fruition.

Bottom line, we don’t know for sure how this running back situation will pan out in Washington, but he is still the starter. I want to share some recent real life straight up trades that I’ve seen for Antonio Gibson just today that would have been instantly rejected this time last season:

And while there are hundreds more and even more complicated ones, this tells me one thing: Now’s the time to move on Antonio Gibson. The value for him right now is fantastic. In case you didn’t know, Gibson has only been playing the position since partway through his last year in college. We had to expect some growing pains, so I am completely fine with some struggles here and then in his first two years on a bad team.

But the best reason to buy Antonio Gibson right now is the best reason to buy anything. FOMO. “Fear of missing out” strikes the heart of even the most iron willed manager, and it’s the job of a savvy one to take advantage. Look for those who are nervous about the unknown for Antonio Gibson and make sure he’s on your squad. And in the off chance he fails, which I don’t believe he will, the price you pay now is a forgivable loss. In one of the easiest verdicts yet: