Where does talent and opportunity intersect for the purpose of fantasy football success? This is a question I have recently been asking myself regarding a Wide Receiver I have admired for a long time: Amari Cooper.

Amari Cooper is now a Cleveland Brown; a bit jarring, isn’t it? At first, it certainly was. The news of the trade between Dallas and Cleveland caught the football world by surprise, but especially because of the compensation included in the deal. Dallas shipped Cooper away for Cleveland’s 5th round pick along with a 6th round pick swap between the teams.

This figured to be a purely financial decision since Cooper was due 20 million dollars on March 20; the Browns got an absolute steal in their acquisition of Cooper. The Browns were in desperate need of a big-time WR after they released Odell Beckham Jr. in the middle of the 2021 season.

Two days after the Browns traded for Cooper, something interesting happened. Cleveland released veteran WR Jarvis Landry, paving the way for Cooper to fall into a commanding opportunity for a promising target share in the Browns passing game.

Then six days after the Cooper trade, the BIG news came! The Cleveland Browns traded for Deshaun Watson, the most prestigious and unfortunately controversial QB on the market. The bombshell trade happened just 24 hours after Baker Mayfield requested a trade after the Browns had made it clear that they were pursuing Watson.

My initial fear of Cooper losing out on quality of touches for an increased offensive target share had been put to rest overnight. This is literally the best-case scenario for Amari Cooper’s fantasy outlook. There is only one big IF hanging in the balance which brings an uneasy predicament for Cooper’s outlook. Just because Watson was successfully traded and received a hefty contract doesn’t mean that the NFL won’t punish him under the personal conduct policy. The leagues’ investigation of Watson remains ongoing.

What will that mean for Cooper’s fantasy outlook in 2022 and beyond? The intersection of Cooper’s talent and opportunity has found a new peak but questions of Watson’s availability remain; hence the dynasty dilemma.

The last time we saw Cooper’s new quarterback Deshaun Watson play he had three straight seasons of being a top 5 QB. In the 2020 season, Watson supported two top tier fantasy viable WRs; Will Fuller and Brandin Cooks. Fuller was well on his way to having a WR1 season before he was suspended for PEDs which caused him to miss the final five games of that season. Fellow teammate Brandin Cooks finished as a high-end WR2.

Cooper will remain the prototypical X receiver and the clear cut #1 pass-catching option in the Cleveland passing game. All these combined factors indicate that he is certainly a worthy WR target for 2022 and beyond. 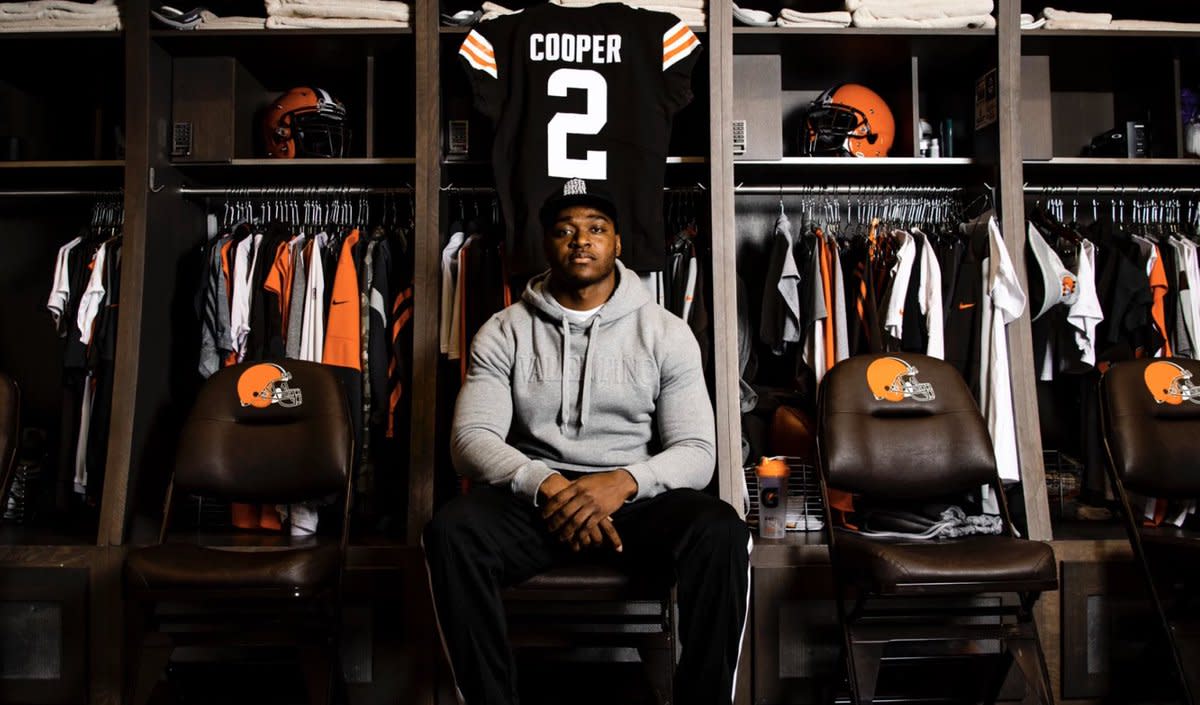 The primary scenario where I would find it to be the most advantageous to sell is if you have him rostered on a rebuilding team and are in position to flip him for max value to a contending team. Let the contending team deal with the potential Watson headache and have your team focus on the players of tomorrow.

Furthermore, I think there is a real possibility that Deshaun Watson could face punishment under the NFL’s personal conduct policy; I could imagine anywhere from 6 games to a full season. Of course, this would delay the likelihood of Cooper’s ascension to fantasy stardom. He would revert to my original outlook assessment of big talent and opportunity with decreased quality of opportunity; albeit temporarily.

The combination of Cooper’s age, opportunity potential, and substantial QB upgrade in Cleveland, I figure Cooper to be a dynasty buy or hold.

I see Cooper holding WR2 value with WR1 upside with Deshaun Watson leading the Cleveland offense. Even with a potentially temporary suspension for Watson, I believe in Cooper’s talent so I would be willing to buy with the expectation of a WR2 to WR3 floor.

However, if I already have Cooper rostered, I am more than happy to hold because the swing in his value has completely skyrocketed! He could very well be the piece to make a mid-tier team into a contender.

Amari Cooper is ready for launch!

Thank you for reading! Follow me on Twitter @FantasyLadder for any further fantasy football discussion, questions, or advice