This offseason has been a weird one for those rostering Alvin Kamara. With the expectation put out there of Kamara potentially being suspended for the first six games of the season, Kamara became much more easily acquired over the offseason for contending teams. That coupled with his age at his position made him a truly affordable superstar. When Kamara’s court date got set back and thus his eventual suspension, Kamara managers rejoiced as their true elite fantasy RB would be in their lineups Week 1 this season. Much to their dismay Kamara would be injured in Week 1, miss Week 2 entirely and be incredibly inefficient in Week 3. Now we must figure out what to do with Alvin Kamara in this Dynasty Dilemma.

Anyone that was on the opposite end of Alvin Kamara in their fantasy finals in 2020 when he hung 6 scores on Christmas Day against the Vikings can give you reasons to buy. I remember being in three separate finals against Alvin Kamara that season and going 0-3 in those finals. When at his peak Alvin Kamara can be a difference maker in fantasy football that not many others are capable of. Right now could be a good chance to buy into the dip after a slow start to the season. If he goes on a run at the end of the season again, having him on your roster could be the difference between bringing home the championship or checking your bylaws to see what the 2nd place payout is.

Truly elite level talent is rarely available for the price that isn’t gonna cripple your franchise going forward. The volume was still present in Week 3 despite the lack of production. Kamara in his career has normally been one of the most efficient RBs in football. If I am gonna get 70% of the snaps, 15 carries and 7 targets for Kamara on his first game back from a rib injury, I will be happy with whatever my result is from there. 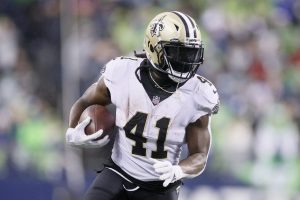 The biggest fear with holding an elite RB is the fear of being caught holding the bag when their value completely disappears. Kamara has held value for a long time now in terms of RB, almost a unicorn at his position being a RB1 every single season he has been in the league. Eventually he will begin to stop producing the way every running back has in the past. This could be the last time to get any sort of return on investment for Alvin Kamara.
Kamara also still has a court case still in his future that could carry with it a multiple game suspension. If it is in your fantasy playoffs it could cost you big time if he was a player you were depending on. Moving him now for a safer player could be the move so you aren’t desperately trying to piece a lineup together in the fantasy playoffs after being the best team all season long. If you are lucky enough to get through this season with no suspension you will likely have to deal with one early next season which will make him very difficult to sell this offseason.

With the obvious disclaimer that this advice applies to serious contenders only, I am buying Alvin Kamara at his current price tag. No clear timeline exists for his impending suspension which could make many that roster Kamara a bit worried. The upside of having a guy that could drop 40 plus in PPR scoring cannot be overstated. There is a real chance you cannot flip him at some point for the 1st you spent to acquire him but I’m more interested in winning championships then I am in winning trades. I would likely try to buy for two 2nds if possible or a 24 1st if pressed.