After far too long without football, we can all sing praises to our favorite football players and teams as we can finally see them in action.  After months of speculation, analysis and flat out dreaming, the preseason is here!  While we can’t take too much stock in the preseason as most of the starters are resting, it’s still football.  And for that we can all be thankful.  As the preseason continues on, it’s a great time for fans, but it’s an even greater time for dynasty fantasy football managers.  Many of the young unknowns are taking the field, trying to prove their worth and we need to take advantage.

Today, let’s turn our attention to New England Patriots wide receiver, Kristian Wilkerson.  Wilkerson made some waves late last season in the last game of the year where he torched the Jacksonville Jaguars for two touchdowns.  It’s important to settle our excitement as the lowly Jags were well out of it by this point and it was only one game, but it certainly was worth noting.

Getting back to the present, in New England’s only action so far this preseason, Wilkerson certainly wasn’t forgotten.  While he missed out on a touchdown, he was targeted a team high 12 times; catching 8 balls for 99 yards.  This included a fantastic 33 yard catch, which was quite beautiful.  Open early and often, Wilkerson continued to send a message to Belichek that he should be on this roster and featured.  I, for one, believe in Kristian Wilkerson moving forward and here’s why.

The Story So Far

Wilkerson wasn’t a stud straight out of the gate in college but by his third year, he was showing the NCAA what he could do.  Even more impressively, his senior year he opened more eyes with his skill and poise.  In his senior year, he caught 71 passes for 1,350 yards, while adding 10 touchdowns.  It’s important to note that that next closest receiver had virtually half the yards and less than half the touchdowns.  All in all, during his tenure at Southeast Missouri State, he compiled 219 receptions for 3,540 yards and 33 touchdowns.  It helps to know that these are all school records.

Given the opportunity, Wilkerson, receiving from a quarterback who wasn’t a big name by the way, dominated opposing defenders.  But despite all his pizzazz, he was left undrafted.  Although Tennessee took a chance on the UDFA, it was short lived.  Without the draft investment, it was easy for the Titans to not feature him and ultimately cut him loose.  He’s been with the Patriots since 2020, just waiting for his chance.  Is it only a matter of time until the front office sees what they have? 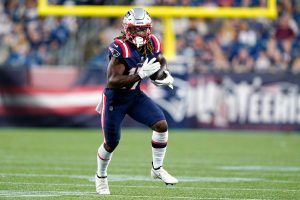 If we’re being honest, the New England Patriots aren’t boasting the most dominant receiving room in the league this year.  Not only that, but the depth is not much to write home about.  While New England does have Jakobi Meyers, DeVante Parker, Nelson Agholor and Kendrick Bourne as starters, those names are not ones that are setting the NFL on fire.  Sure, there is money invested, but the chance to make a name for yourself in New England is one of the better places in the league for wide receivers.

The Patriots also invested fairly heavily in Tyquan Thornton in the draft this year, using a second round pick, but after that, the depth is full of question marks.  So, why not take a chance on Kristian WIlkerson?  He’s shown in limited capacity that he can score and dominate in the NFL, so hedging a bet on him squeezing his way into the starting lineup isn’t that far off.  The depth isn’t there and the starters aren’t immovable, so this all equals a golden opportunity for Wilkerson if he can just get his chance.

In dynasty, we need to take advantage of finding deep sleepers while others are simply sleeping on them.  The National Football League is truly a league of, “What have you done for me lately?”, meaning that the rosters are forever fluid.  It’s not a stretch to imagine DeVante Parker being on a short leash, despite the monetary investment.  Same goes for Nelson Agholor, who was admirable but not amazing last year.  And while I doubt Jakobi Meyers and Kendrick Bourne don’t run the show at receiver this season for the Patriots, there is plenty of room for more as Mac Jones isn’t a runner and will throw often.

The best news is that Kristian Wilkerson is pretty much free in most leagues.  In the multiple leagues I play in, he was sitting in free agency.  And if someone in your league has him, there’s a good chance he can be treated as a “throw in” player in a deal that you can easily make.  In redraft, I’m not preaching the Wilkerson gospel yet, but in dynasty the time is now.  Make sure Kristian Wilkerson is on your roster moving forward.