In fantasy football, it can be hard to find the right value at tight end.  Historically the tight end position has featured two or three at the top, followed by a mid tier of a handful of guys, finished off by crossing your fingers and hoping you drafted the right gate in the late rounds.  In dynasty, this is even further complicated.  It is truly the hardest position to draft correctly for many, and I’ve preached for years that the best value is in the middle tier.

You could break the bank for guys like Mark Andrews, Kyle Pitts and Travis Kelce, but that’s where you should be taking your elite running back, wide receiver or quarterback in superflex.  Even players like George Kittle and Darren Waller are too expensive at their prices.  It’s no secret that I love later values like Cole Kmet, but you should make sure you grab a guy in the middle too.  Two of these mid range tight ends are Dallas Goedert and Dalton Schultz.

If you look at most experts’ lists, they are often ranked back to back, so let’s take a moment and assess which player you should go for to get the best bang for your buck.  Since it’s fantasy, let’s start with the offensive numbers.  And I’m going from the past two seasons, as that’s when Schultz finally got his shot. 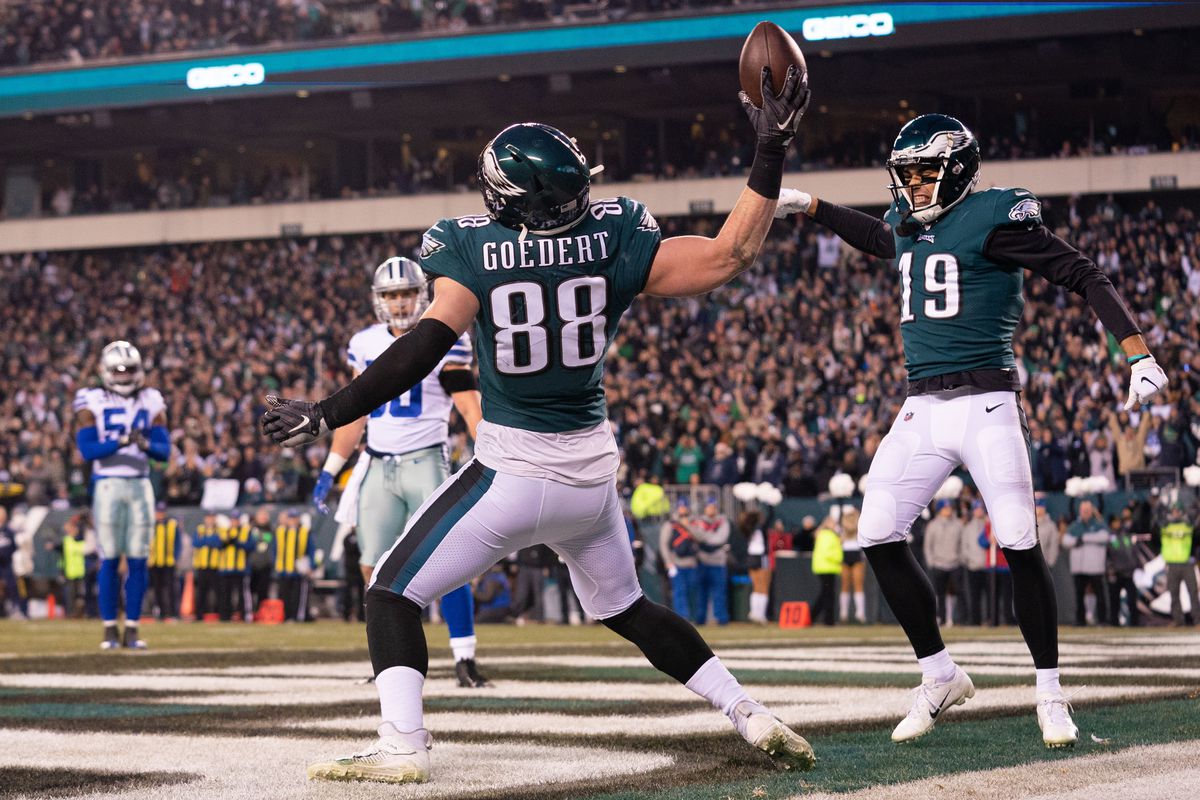 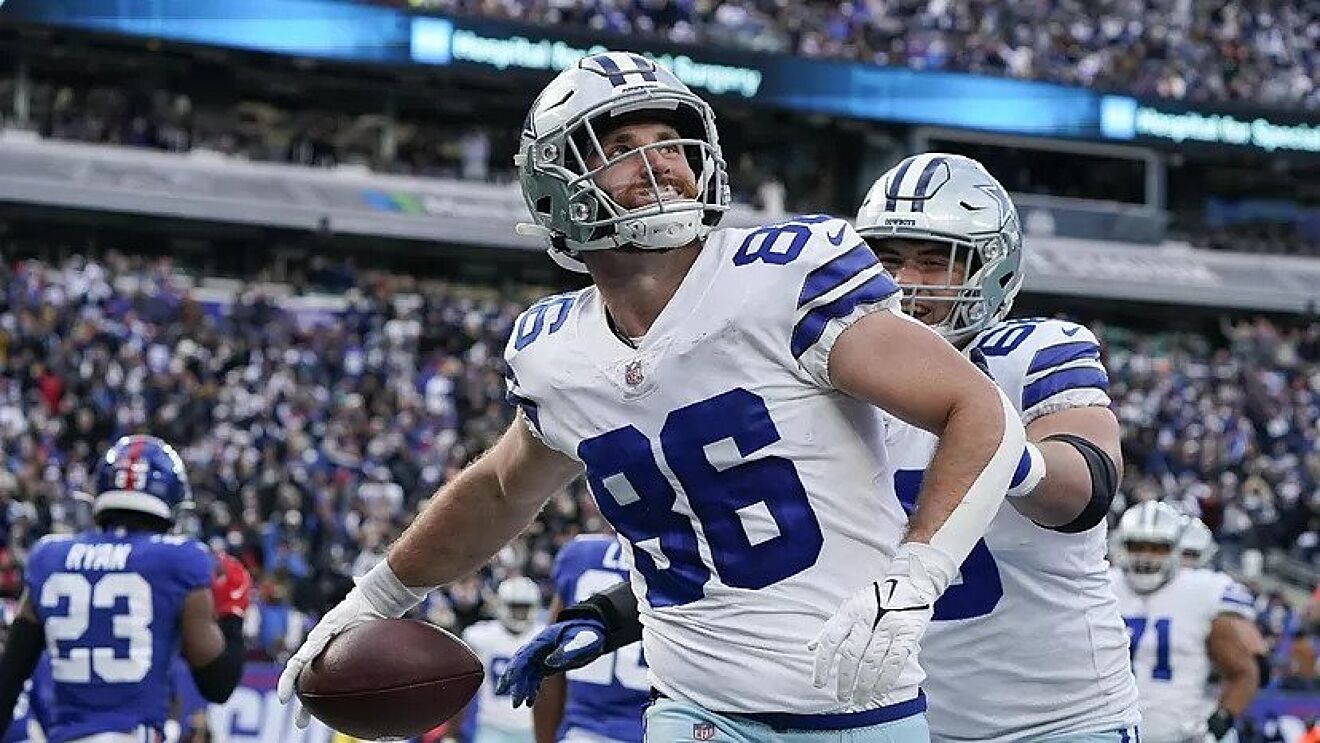 At first glance, it can look pretty overwhelmingly in Schultz’s favor.  After all, he surpasses Goedert in virtually every aspect, but it is important to remember that Schultz played 7 more games over this span.  So if you do the math, the numbers are actually a lot closer than they look.

Now, there is something to be said about taking the guy who can stay on the field, but injuries happen to everyone and taking the healthy guy can’t be the forefront decision matrix when assessing the best value.  It’s also important to know that Goedert was sharing the ball with Zach Ertz until partway through last season, whereas Schultz was the primary tight end option in Dallas.

All that being said, it’s impossible to ignore that Dalton Schultz is ahead in the offensive numbers thus far.  I give the edge to Schultz; albeit a smaller edge than it looks by the numbers.

Dallas Goedert thrived as the primary option at tight end after Zach Ertz left for Arizona last season, but many are concerned now that AJ Brown has arrived.  There is also the continued development of DeVonta Smith and Kenneth Gainwell.  And let’s not forget that the quarterback in Philly is not exactly a throw first kind of guy.  That being said, Goedert actually enjoyed his best statistical season three years ago when he had to share more and had a quarterback throwing more.  I have faith that Goedert won’t fall off a cliff like some are envisioning.

Dalton Schultz is now thrown into the fray with even more gusto now that Amari Cooper is gone.  For many this signals a jackpot as there will now be 104 targets up for grabs.  This number is even higher if you consider Cedrick Wilson’s 61 targets are also up for grabs.  While many see the golden road being unveiled for Schultz, we have to temper our expectations because he could just as easily be double teamed, leading others to scoop up those newly found opportunities.  I have an opinion that is somewhere in the middle of these two.

Even though I want to give the edge to Dalton Schultz, my gut tells me that CeeDee Lamb, Michael Gallup and even Jalen Tolbert will benefit more from those vacated targets than he will.  I also believe that Goedert will make the most of his seemingly doom and gloom situation and thrive making the most of the opportunities given.  It’s very close, but I give the edge to Dallas Goedert.

` Like all of the deathmatches, either option is fantastic.  Choosing one above the other isn’t a make or break decision, but since only one can survive, we have to do one of them dirty.  So, I’m going the direction of Dalton Schultz.

Although I believe Goedert is fantastic and he will make the most of his opportunities, I’d be blind to ignore the fact that Dalton Schultz is set up better for the long term.  Their value this upcoming season will be quite close in my estimation, but after this season, I feel like there will be a pulling away for Schultz.

Schultz’s quarterback is better for his fantasy situation and the competition will eventually eat up at Goedert’s profitability.  There is too much money invested in AJ Brown to not feature him drastically.  And after this season, once Brown is comfortable with the new playbook, I can’t see him being underused in any way, shape or form.

If you’re asking me who the better option is in redraft this upcoming season, it might swing a different way, but in dynasty I choose Dalton Schultz.