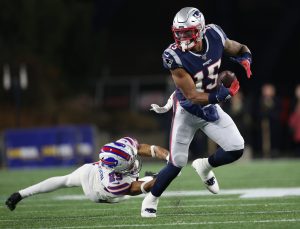 In football, it is easy to give up on a player after just one or two poor seasons.  Patience is a hard thing to come by, both in the fantasy world and in the real-life NFL world.  At some point in time, we have all given up on a player too early, but the important thing is to learn from your mistakes.

I get it...once you get burned by a player, it’s hard to forgive and forget and just move on.  Sometimes you just want to cut your losses and move on to a player or asset you feel more comfortable with.  I say all of that to say this...don’t make that same mistake with N’Keal Harry this season.  Whether you own Harry right now, or whether you have the ability to acquire him in a trade, he is a must own player in all dynasty leagues.

To dig deeper into Harry’s future, we have to break it down into two parts; first the player and second the situation.

Let’s take a look at N’Keal Harry the player.

First, you have to absolutely love his size at 6’4” 225lbs, which makes him one of the biggest WRs in the league.  I don’t know about you, but I prefer my players to be bigger guys to give me confidence their bodies can withstand the punishment it takes playing in the NFL.  Then, think about his athleticism...4.53 40-yard dash, 38-inch vertical, 122 inch long jump, and 27 reps of 225lbs on the bench.  Yes, I said 27 reps.  So to make this simple, he’s big, he’s fast, he can jump out of the gym, and he's stronger than many of the offensive lineman in the league.  Sounds like a player to get excited about, right?

Harry is just twenty-two years old and was most likely the number one or number two overall pick in your rookie fantasy drafts last season.  He was selected in that range for a reason.  New England drafted him in the first round of the 2019 NFL draft, and if you have ever watched a highlight tape you will see that he catches everything thrown his way.  Last season, Harry was injured and started the year on the IR.  He was designated to return from IR and went on to play in just seven games and only started in five of them.

Although his stats were not anything to get overly excited about, there are some golden nuggets of info to consider.  First, you most likely did not know that New England handed him the ball in the running game several times towards the end of the season.  He had a total of 6 carries for 56 yards if you count the regular season and playoffs.  Out of those 6 carries, he picked up 4 first downs.  That type of role in the offensive is exactly what helped make Deebo Samuel so valuable last season for the 49ers.  Harry didn’t disappoint with his production in the run game considering he was just shy of 10 yards per carry.  This also shows us that Josh McDaniels both trusts him as a runner and specifically called plays for him in the run game.  I anticipate this is something we will see more of in the 2020 season.

Harry only caught 12 of his 24 targets last season, but 2 receptions of those went for touchdowns and 7 others went for first downs.  Not bad considering it was just 12 catches.  I personally don’t want to put too much stock in his lack of receptions because there were so many factors working against Harry last season.  He was hurt and missed the first nine weeks of the season, New England’s offense was an absolute mess, and their offense has historically been very difficult for players to grasp in their first season with the team.

Now, we have to look at the second part...his situation.  Josh McDaniels is the Offensive Coordinator, and we know that he loves bigger receivers based on his tenure with the Denver Broncos.  McDaniels personally drafted both Demaryius Thomas and Eric Decker during his time in Denver.  Both were outstanding players and both were bigger receivers, but neither as big as Harry.  Then last season, New England traded for Mohamed Sanu during the season while Harry was on IR.  Sanu is also a bigger receiver, but he too isn’t as big as Harry nor is he as talented.  New England also doesn’t have a proven TE on the roster and history has shown us their offense has been most effective working the middle of the field and the red zone with big bodied players...both are areas where Harry can excel.  New England did draft two TEs this year, but it typically takes a few seasons before rookie TEs have meaningful fantasy value.

The most important factor on why Harry’s situation is just too perfect this season, is the signing of Cam Newton.  During Cam’s career, we have years of evidence that shows  he loves to throw to the big guys.  Think back to the Kelvin Benjamin, Devin Funchess, and even the Greg Olsen days of Cam’s career.  If we look back we see that in 2014, rookie Kelvin Benjamin led the team in targets with 145 while Greg Olsen was second with 123.  Then in 2015, Cam’s MVP season, Olsen led the team with 124 targets while Devin Funchess was third with 63.  In 2016 Olsen led the team with 129 targets, Benjamin was second with 118, and Funchess fourth with 58.  In 2017 Funchess was second on the team with 111 targets only behind Christian McCaffrey, who had just two more targets with 113.  2018 was the only outlier as Funchess had just 79 targets which was only good for third on the team, but Christian McCaffrey exploded that year with 124 total targets and DJ Moore was second with 82.  Both McCaffrey and Moore are far superior talents to Funchess, but he still hung around because of his size.

Cam has struggled with accuracy throughout his career.  History shows us he prefers one of two things; dump it off to the RB or throw it to the big guy.  Let’s be clear, there is no Christian McCaffrey on the Patriots.  Yes, James White is a great pass-catching back and I have no doubt that he will get his fair share of the targets, but the real winner here is N’Keal Harry.  He is a big guy with a gigantic catch radius, who can go up and get the ball and win those jump ball situations.

Cam and Harry have already been working together on their chemistry this offseason. Harry should be hungry to prove that he belongs in the NFL and also should have a massive chip on his shoulder.  For all of these reasons, N’Keal Harry will not only improve in his sophomore campaign, but he will be one of the breakout WRs this season.

If you fell in love with players like AJ Brown and DK Metcalf last season, you likely cannot afford to acquire those guys with their new perceived values.  Save your assets and go get yourself Harry and sit back and reap the benefits all season long.