Back in April, before the NFL Draft, I put out a “Buy Low Sell High” article. Looking back I hope you took my advice, because I recommended you buying low on players like Ezekiel Elliott, Dallas Goedert, and Lamar Jackson. Some players I said to sell high were James Robinson, Josh Jacobs, and Chris Carson. You can see that article here: https://dynastyprosfootball.com/dynasty-buy-lows-sell-highs/

I’m back now to share with you who is on my “Buy Low Sell High” list now. 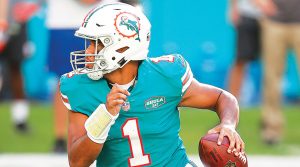 So many fantasy football players are already calling Tua a bust. He was coming off a brutal injury, a shortened off-season, and an absolutely terrible receiving corp. That’s what Tua Tagovailoa dealt with last season. Now heading into year two, Tua now has a completely revamped receiving corps that fits his skillset perfectly, and he's had the full off-season to prepare as the starter. I can see Tua Tagovailoa being that late round QB to break out this season, just like Patrick Mahomes, Lamar Jackson, and Justin Herbert did previously. He is one of my favorite buy low candidates. 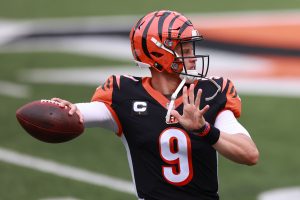 I’d personally like to thank Justin Herbert for taking up all the rookie spotlight last year. That allows me to swoop in and get Burrow as a fantastic value. We all know that Burrow has tremendous talent, a great receiving back in Joe Mixon, and now three incredible WRs after drafting Ja’Marr Chase. Let’s add a terrible defense to the mix. All that means fantasy goodness. I don’t care if it’s garbage time or not, Burrow is going to be playing from behind a lot this season. That could very well put into the QB1 conversation. 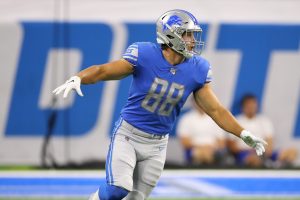 I’m not saying you will get Hockenson cheap, but this may very well be the lowest price you’ll be able to buy him moving forward. He and Jared Goff have worked together a lot this offseason, and it has been showing in camp. Multiple reports say that Hockenson is clearly the #1 target in the passing game. You can’t argue that when your starting WRs are Breshad Perriman and Tyrell Williams. Detroit is another terrible team that will be playing from behind a lot, which is good news for Hockenson owners. After this season I believe Hockenson will be joining the “Elite TE” Tier with Kelce, Kittle, and Waller. 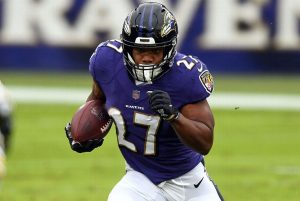 Dobbins showed everyone last season that he was arguably the best RB in the 2020 NFL Draft. Now he's poised to take a big step forward in his second season. While we can expect big things from Dobbins and this Ravens rushing attack, fantasy owners are still worried about Lamar Jackson and Gus Edwards taking work from Dobbins. That should be a concern in most offenses, but not Baltimore’s. The Ravens run enough that it shouldn’t affect Dobbins’ workload. He averaged 6.0 yards per carry last season, which was tops amongst all RBs. The Ravens have been throwing to Dobbins a lot in Training Camp as well, which only increases his value in PPR Leagues. Dobbins will get plenty of work and should easily eclipse double digit touchdowns. I have him projected for 1132 rushing yds, 11 TDs while adding 29 rec for 289 yds, and 1 rec TD. That puts him firmly in the RB1 category. 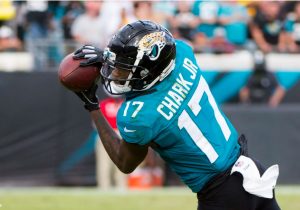 Remember this guy? DJ Chark was a hot name this time last year. In 2019 Chark averaged 15.67 PPR points per game. That was good for 14th amongst wide receivers. Unfortunately last season Jacksonville just stunk it up. Poor play calling and quarterback play crippled DJ Chark’s ceiling. Enter Trevor Lawrence. This big-armed quarterback isn’t afraid to sling the ball. Marvin Jones will get attention lining up on the other side of the field, and Laviska Shenault is a mismatch lining up in the slot. All of this bodes well for Chark, who should see plenty of single coverage. Currently being drafted/viewed as a WR3/WR4, Chark is a perfect buy low candidate that should return solid WR2 numbers. 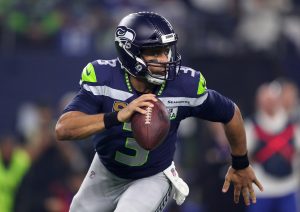 Wilson is one of the first players that come to mind when I’m thinking “Sell”. He is an incredible fantasy QB throughout the first half of the season, but he really cools off for the 2nd half of the season. This has been the case over the last couple of seasons, and that really lets you down for your fantasy playoffs. In 2020 Wilson averaged 25.75 fantasy points through week 8. He averaged 17.08 points per game from Week 9 on. In 2019 he averaged 24.94 fantasy points per game through Week 9. After that.. 13.01 points per game moving forward. You can sell him now or use him until around Week 7 to trade him for a great return. 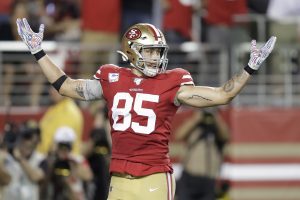 I’m not saying get rid of Kittle, but I would certainly entertain offers for him. He is an absolute beast when on the field. I don’t have to give you stats. Kittle is a fantasy stud, and we all know it. So why is he on this list? Because he plays pretty rough, and I have some durability concerns when it comes to him. Plus I love selling players at their highest value and getting good players and good picks in return. I would target the Darren Waller owner in your league and see if you can get Waller in addition to another solid player, or a 1st or 2nd round rookie pick. 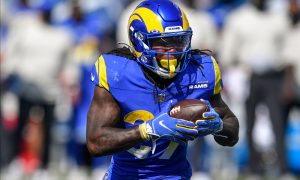 Sell, sell, sell, unless you handcuffed him to Cam Akers. If not, you’re playing with house money. You already have your RBs and Henderson was a late round or waiver wire pickup. Go target the RB needy owners in your league and make out like a bandit. I’ve seen Henderson go for a 1st round rookie pick in many leagues already. If you can make that deal, do it. If not, bundle him with someone to upgrade a position. My favorite is pairing him up with a mid tier Tight End to upgrade to Darren Waller or possibly even Travis Kelce. 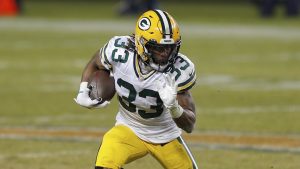 Think about how worried you Aaron Jones owners were with the thought of Aaron Rodgers not returning to the Green Bay Packers. Those owners dodged a bullet this season, so let’s not go through that again. Rodgers’ new contract grants him an “out” after this season if he chooses. Sure, Aaron Jones put up great numbers last season averaging 18.49 PPR points per game, but if ARod leaves after this season, Jones’ fantasy stock will plummet. My recommendation is to cash out while you’re ahead. If you’re not getting what you want right now, don’t worry. Just wait a couple of games into the season. Everyone needs RBs in fantasy. When Jones puts up some serious fantasy points, take advantage at that point and cash in. 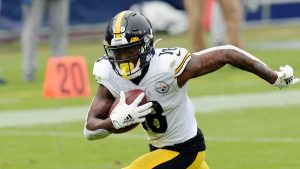 Johnson is another great sell high candidate. He averaged 15.09 PPR points last season as Ben Roethlisberger’s favorite target. Big Ben’s arm is shot, and this may very well be his last season. With that uncertainty looming in Pittsburgh makes me want to sell Johnson at what could be his highest value. With the emergence of Chase Claypool and JuJu Smith-Shuster getting his targets, it’s hard to predict what kind of numbers Johnson will put up this season. Don’t forget that the Steelers want to focus a lot more on the running game after selecting Najee Harris in the 1st round of this year’s NFL Draft. Find the Steelers fans in your league, because there is always Steelers fans in every league, and target another solid WR on their team like Keenan Allen, Jerry Jeudy, or DeVonta Smith.