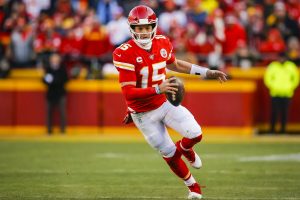 The Kansas City Chiefs have paid some serious dough over the last 10 days to franchise QB Patrick Mahomes and DT Chris Jones.  The Super Bowl champs made Mahomes the first $500 million man and then turned around and signed Jones to a 4-year $80 million deal with $60 million of that functionally guaranteed.

On July 6, the Madden 20 cover boy’s record setting deal was announced.  With a max value of $502,631,905, Mahomes has inked the richest deal in professional sports history.  The 10 year extension will have the 24 year old linked to Kansas City until 2031.

In my opinion, Patrick Mahomes is one of a handful of players in the NFL who is worth whatever his organization wants to pay him.  Chiefs fans pay to go to Arrowhead Stadium to see what incredibleness he has up his sleeve.  The better he performs, and consequently, the better the team performs, the more merchandise fans buy and the more money the franchise makes.

Jones, 26, was on the franchise tag designation for the 2020 season, but had threatened to sit out without a resolution on a new deal.  With Wednesday’s extension deadline looming, the Chiefs struck a deal with the Pro Bowl DT.  Worth up to $80 million, the new contract locks up Jones for four more seasons.

The champs now have their core all signed through the 2021 season, allowing them to attempt to build the next NFL dynasty.  In 2021, Travis Kelce and Tyrann Mathieu become unrestricted free agents.  Tyreek Hill’s deal runs through 2022 before he becomes a free agent.  What happens then?  Who will be cap casualties when the core players have to be paid...or demand to be paid?

The question has to be asked...and rightfully so...is the oft injured receiver worth paying $9+ million a year?  With guys like Mecole Hardman and Demarcus Robinson around, Watkins’ time in Kansas City could be coming to an end. 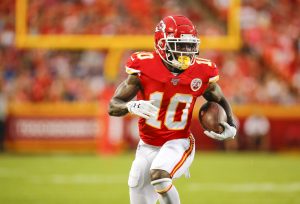 Tyreek Hill - Hill is going to get a massive deal when his contract expires after the 2022 season.  The question is...will that deal come from the Chiefs?   Could they afford his services?  His numerous legal issues have been a concern, and a deal would likely be contingent on him staying out of trouble moving forward.

There is no doubting his on-the-field contributions.  He is one of the best WR in the NFL and his speed is second to none.  The 26 year old Pro Bowler has put up multiple seasons of 75+ catches and 1,100+ yards, and is widely considered a top-5 dynasty WR.  Would he still be considered that if he moved on to a different offense?

Mecole Hardman - The 2nd year WR could be a major beneficiary if fellow pass catcher Sammy Watkins moves on after his contract expires.  In a dynasty league, I would set my sights on Hardman as a trade target.  If he becomes the WR2 in Kansas City after 2020, he could be a major steal.

In 2019, Hardman was drafted by the Chiefs in the 2nd round.  What that tells me is that they have major plans for him and expect him to be a big part of their future offense.  When Tyreek Hill’s contract runs up after 2022, he could be in line to become the WR1 if Hill moves on.

Damien Williams - Signed as an undrafted free agent by the Miami Dolphins in 2014, Williams signed with KC in 2018 and became a dynamic part of their offense after Kareem Hunt was released.  In 2019, he was a key component in the Chiefs Super Bowl comeback victory over the San Francisco 49ers.

The Chiefs drafted Clyde Edwards-Helaire in the 1st round of the 2020 NFL Draft, seemingly spelling doom for Damien Williams fantasy owners.  Williams’ current contract is up after this season, and could be another player forced to find employment elsewhere. 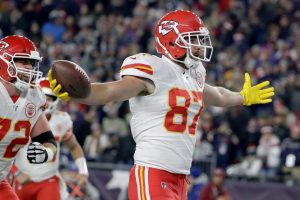 Travis Kelce - Kelce is a future Hall of Famer.  He has had over 1,000 yards the last four consecutive seasons, and has had at least 862 yards every season since he took over as the starting TE for the Chiefs.  His current deal is set to expire after ther 2021 season and he will be 31 years old.

With Kelce getting older, will the Chiefs try to re-sign him to a big deal?  With Tyreek Hill’s deal expiring in 2022, will they look to pay him instead?

So many variables will end up contributing to who stays in Kansas City and who ultimately will leave.  One thing is for sure though, the Chiefs will have at least a couple more seasons of high octane offense as they look to repeat as Super Bowl champs.