Do the Colts Have the Right QB for Fantasy...Or Reality? 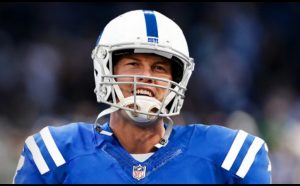 I was mid fantasy draft last year in my ‘home league’ that I play in every year, when I received the notification that Andrew Luck was calling it a career. I had just made a selection, somewhere in the eighth round or so, and I just stared at my phone in bewilderment. One of the NFL’s most revered QBs was walking away during what seemed to be the prime of his career.

Luck was unable to continue on with the grueling reality for him that was: play football, rehab, train, play football, rehab….you get it. A vicious cycle. Quick side note-- if anything comes up during a draft about a player, I usually don’t bother to tell anyone I’m drafting with as you should always be paying attention to these things while drafting. However, I did make it known that Luck had retired, and even with advanced warning given, he was still selected about two picks later.

Anyway, the Indianapolis Colts were left with no choice but to turn over the reins of the QB position to Jacoby Brissett. The Colts would go 7-9 in the year that Andrew Luck retired right before the beginning of the season.  This was Brissett’s first real shot at being a starter (aside from 2107, when Brissett was traded to the Colts in September to fill in for Luck who didn’t return).

Fast forward to today, where the Colts have brought in veteran QB Philip Rivers on a one-year, $25 million deal. Mind you, the Colts gave Brissett a two-year extension at a total of $30 million before last season started.  So as we head into 2020, it seems the Colts feel they have an opportunity to win now by bringing in Philip Rivers. While I’m not a NFL GM, I’m not so sure this will pay off in reality, nor in fantasy.

Regardless of who you believe should be starting, the Colts will have the benefit of going into 2020 with Pro Football Focus’ top rated offensive line. Every player on the offensive line played over 1,000 snaps last season. Continuity goes a long way for offensive lines. For Philip Rivers, this is a massive upgrade. However, being part of a new team for the first time since 2004 is still something he has to adjust to.

Rivers is the definition of a pocket QB. Since he took over as the Chargers starting QB in 2006, he’s only rushed for over 100 yards in a single season once. Brissett rushed for 228 yards in 15 games in 2019, and he also added four scores on the ground last season... one more than Rivers has in his entire career. The running game for Indy will thrive with this line and Rivers will have time to throw, but likely won’t add any real production on the ground himself.

As a whole, Philip Rivers actually walks into a surrounding cast that is a slight downgrade than the one he had previously in San Diego/Los Angeles. Both the Chargers and Colts have excellent run games. As for the pass catchers, Keenan Allen is a better wide receiver than T.Y. Hilton at this point in their careers. Chargers tight end Hunter Henry is a player that is on the rise, while Eric Ebron has departed Indy, leaving the Colts with Jack Doyle and Mo Alie-Cox.

I know a lot of people are beating the drum for Jack Doyle now that he has a clear path to workload and because Rivers likes to throw to the TE, but Doyle has only one season over 59 catches in seven seasons. Perhaps I’ll be wrong about Doyle and his value for fantasy, but if a player is going to break out it’s likely not in their eighth season.

While Mike Williams has been hit and miss throughout his time with Rivers on the Chargers, he is a veteran that provided a solid deep ball connection. Indy has the hyped rookie Michael Pittman Jr. as well as the relative unknown of Parris Campbell, as he only played seven games last season.

More than any other player, Rivers has to adjust to his surroundings here in a shortened offseason. Timing goes a long way, and there’s a strong possibility of some bumps in the road to get things going in 2020 for Rivers and company.

The Case For and Against Philip Rivers:

There’s no denying that Rivers moves the ball through the air as he has thrown for over 4,000 yards in 11 of his last 12 seasons. He has also accounted for 30 or more passing touchdowns in six of those 12 seasons. Since 2011, Rivers has thrown 18 or more interceptions four times, including last season when he threw 20. Not ideal. In four point per passing TD leagues, Rivers scored 15 or more fantasy points in seven games. Pretty serviceable games. He scored less than 13 fantasy points in eight games. A bit less serviceable. Overall, last season was Rivers’ lowest fantasy output since 2012.

The Chargers were a team in disarray for much of last season, as running back Melvin Gordon held out for training camp and the first three weeks of the regular season. The incredibly poor offensive line play for the Chargers gave Rivers almost no time to make quality decisions. Rivers had his lowest TD% of his career and tied his second highest mark for INT%.

Rivers is currently going as QB22 in drafts, so the risk is pretty well in tune with his ADP at pick 148 overall. He provides upside in yardage and touchdowns, but he’s also not likely to give you anything in the rushing department and could possibly throw his way out of a good game with interceptions.

The Case For and Against Jacoby Brissett:

Brissett started last season pretty hot, earning more than 16 fantasy points in five of his first six games (three of those with 20+). Unfortunately, over the last nine games he would turn in four performances in which he produced single digit fantasy points. Not great.

Brissett adds the threat of at least escaping the pocket to make something happen. His rushing wasn’t consistent game to game, but he did end the season with 228 rushing yards over 15 games and four scores on the ground. Brissett accounted for 22 total TD’s to only 6 INT’s. Efficient. That’s pretty good both for fantasy and for reality, especially when you consider Brissett’s top target for a number of weeks was Zach Pascal.

For as much as Brissett’s average depth of target is talked about, T.Y. Hilton still had five receiving TD’s in the first five games of the season that he played... just one shy of Hilton’s TD total for all of 2018.

The Colts could easily mirror last year’s Tennessee Titans by running the ball, playing defense, and just being efficient through the air. This fits with what Brissett does pretty well.

The Colts did take Jacob Eason (QB out of Washington) in the fourth round of the NFL draft. That’s not huge draft capital, but it is worth noting. Eason can be viewed as a project QB and third on the QB depth chart.

As mentioned in other pieces I’ve written, let’s follow the money.

There was a ton of positive coach-speak last season popping up after the decision to pay Jacoby Brissett. However, the money in the one year deal for Rivers says the Colts look at him as the starter and that they believe he gives the Colts a better chance to win this season. The Colts wouldn’t be the first team to bring in a veteran QB only to have him get beat out in camp, but given the investment, I’d be surprised if Brissett is the opening day QB in Indy.

No one could have predicted the shortened off-season that the NFL now has however, that’s the reality of 2020. No matter how you cut it, Brissett will go into camp with a better feel for this offense.  However, unless something comes out of camp that the tides have turned and Brissett is anointed the starter, you can’t really depend on him for redraft. You can’t depend on him for dynasty either, but I’d certainly be stashing him. Rivers will be 39 years old in December, and while he’s been an ironman of sorts, Father Time could catch up to him and provide an opportunity for Brissett to get another shot under center.

If I knew going into the season that Brissett would be under center, I’d feel better about the Colts as well as the surrounding cast.

Yes...I’m advocating that Brissett is the better option for the Colts.

He’d need to prove himself more this season to be a long term dynasty investment, but if  T.Y. Hilton remained healthy, the offensive line stayed steady, and Jonothan Taylor added to the ground game, Brissett could remain efficient enough to sneak the Colts into the playoffs and be the better option for your fantasy squad.