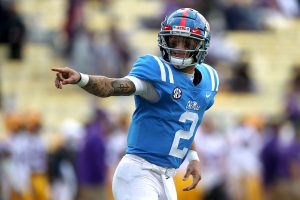 Ole Miss put on a dominant performance against Louisville on Monday night.  After leading 26-0 at halftime, the Rebels defeated the Cardinals 43-24.  QB Matt Corral had a stellar game, throwing for 381 yards and a TD and running for another 55 yards and a TD.  Corral not only solidified himself as one of the best (quite possibly the best) QBs in the SEC, but he could be an NFL Draft riser.

Next: vs Austin Peay

Alabama put on an absolute clinic against Miami, winning 44-13.  In the victory, QB Bryce Young had one of the best starting debuts you will ever see.  He threw for 344 yards and 4 TDs against a very solid Hurricane defense.  The rest of the SEC better get ready, because the Tide don’t rebuild...they RELOAD!

Willis could be working his way up to the number 1 overall selection in the 2022 NFL Draft.  In his limited time against Campbell, Willis went 15/23 for 217 yards and a TD, while also running for 55 yards on 5 carries and another TD.  I fully expect Willis to have a fantastic season coming off his tremendous 2020 season, while also being a contender for the Heisman Trophy.

The Bearcats beat Miami (OH) 49-14 on Saturday in a rout.  QB Desmond Ridder threw 4 TDs and ran for another in the victory, showing why he is a possible 1st round draft pick next April.  Cincinnati is a good squad, but will have some tough games over the next several weeks when they take on Indiana (not Indinia) and Notre Dame.

Next: vs Murray State

Speaking of Notre Dame, the Fighting Irish held off Florida State in OT 41-38.  Senior QB Jack Coan had a spectacular game, throwing for 366 yards and 4 TDs on 26/35 passing.  The transfer from Wisconsin will look to lead Notre Dame back to the College Football Playoffs and improve his draft stock.  Sunday’s victory over the Seminoles was a good start.

Michigan State started off their 2021 season the right way by defeating Northwestern 38-21.  Leading the way was Junior RB Kenneth Walker III with 264 yards and 4 TDs on 23 carries.  Walker was on my radar, but wasn’t quite in my rankings.  That will certainly change moving forward.

Next: vs Youngstown State 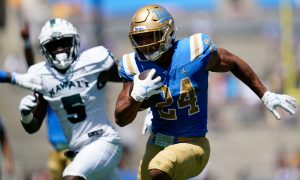 UCLA is off to a quick 2-0 start after defeating Hawaii in Week 0 and #16 LSU.  Transfer RB Zach Charbonnet is getting it done on the ground with 17 carries, 223 yards, and 4 TDs.  Charbonnet has been a devy darling since his time at Michigan, but he is now beginning to show why.

Next: vs Fresno State

Mataeo Durant was a guy I liked a bit last season, even though he was splitting time.  This season, the Blue Devils backfield belongs to him.  In a loss to Charlotte over the weekend, Durant was a star.  He ran for 255 yards and 3 TDs on 29 carries, and I would expect Duke to continue to lean on him.

Last season, Tyler Badie was sharing a backfield with Larry Rountree III.  This season, he is going to carry the load for the Tigers.  In Saturday’s victory over Central Michigan, Badie had 203 yards on 25 carries and a TD, while also catching 3 balls for 40 yards and another TD.

It is always sad when a player has a season ending injury.  It is especially sad when that player is an NFL Draft prospect.  Mohamed Ibrahim was having a great game on Thursday against a great Ohio State team.  He had 30 carries for 163 yards and 2 TDs before going down with a season ending, unspecified lower-leg injury.  The reports say he is expected to make a full recovery

The top WR in my devy rankings showed exactly why he is my top WR.  Kayshon Boutte snagged 9 receptions for 148 yards and 3 TDs in the Tigers’ loss to UCLA.  He is not draft eligible until after next season, but the Sophomore is definitely one of the top WRs in the country.

Still one of my top devy WRs, Hall is playing behind some absolute monsters at Alabama.  Normally, 1 catch for 10 yards would cause a drop in my rankings, but this Freshman will be a juggernaut for the Crimson Tide. 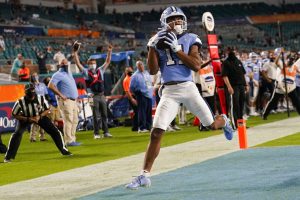 Despite the disappointing loss to Virginia Tech, Josh Downs had himself a day.  He had 8 catches, 123 yards, and a TD for a team that did nothing else of note.  He would have had an even better game had his QB not thrown the ball to the other team so much (Sam Howell had 3 picks).

Next: vs Georgia State

I get it...Boston College played Colgate.  However, Zay Flowers was dominant with his 7 catches for 135 yards and a TD.  Obviously, the schedule will get somewhat tougher when BC starts conference play.  I still expect Flowers to get his though.  With a good QB (Phil Jurkovec), the Junior WR will thrive this season.

These two guys are top-end, 1st round draft pick WRs.  They will be responsible for helping new QB CJ Stroud and for putting Ohio State back into the College Football Playoffs.  In the victory over Minnesota, Olave had 4 catches for 117 yards and 2 TDs and Wilson had 5 catches for 80 yards and a TD. 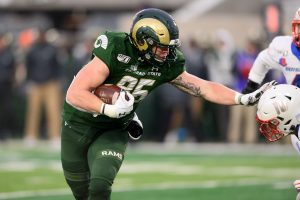 Senior TE Trey McBride is possibly the only bright spot for a pretty bad Colorado State football team.  His 13 catches for 116 yards in a 42-23 loss to South Dakota State led the Rams.  McBride is one of my top devy TEs and is my top TE in this draft class.

Despite a late drop against Florida State, Michael Mayer had a tremendous ball game.  His 9 catches, 120 yards, and 1 TD were pivotal in Notre Dame’s OT victory.  The Sophomore may be the best TE in college football.