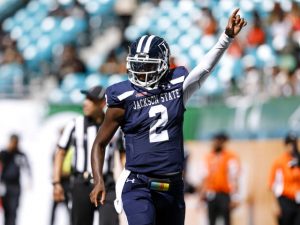 Shedeur Sanders is more than just Deion Sanders’ son…he is a legit NFL prospect.  A high 4* QB coming out of high school in Cedar Hill, Texas, Sanders chose to follow his father to Jackson St.  However, he could have gone nearly anywhere in the country.  Sanders is a winner, winning two state championships in high school and then leading Jackson St to back-to-back Cricket Celebration Bowl appearances.

His dual threat ability allows him to escape the pocket and extend plays, but he does not look to immediately tuck and run.  He reads the field well and throws a nice deep ball with good touch.  While he does not possess a huge arm, he does have enough arm to push the ball down field.  During his two seasons at Jackson St, Sanders threw for over 6,900 yards and 70 TDs and connected on better than 68% of his passes.

He will be making a big step up in competition next season at Colorado, but not many have the ability Sanders has.  He is a big-time Devy asset and will likely continue to gain hype moving into the 2024 NFL Draft season.