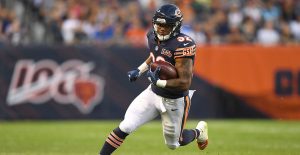 If you drafted David Montgomery in your rookie draft last year, I’m sure you’re rolling your eyes at this. He severely underwhelmed last year, there’s no doubt about that. However, I think a lot of the struggles were related to bad play calling and below average quarterback play.

In 2 games last season, the Bears completely abandoned the run, which left Montgomery with single carry games in those weeks. Regardless of what you may believe about Mitchell Trubisky or Nick Foles, I think we can all agree the Bears offense should improve this season.

In spite of the offense last year, Montgomery saw 242 carries and caught 25 receptions. The Bears didn’t add anyone to the backfield to compete with him for carries, so there is really no worry there. Tarik Cohen is more of a 3rd down pass catcher and slot receiving back, so he doesn’t really pose a threat to Montgomery’s carries either. Mike Davis is still there, but he has only proven to be a depth piece on each team he’s played for. To put it simply, Montgomery is in line for over 250 plus touches again this season.

With how bad the Bears were last season, Montgomery still managed to run for 889 yards and a respectable 189 receiving yards. He also had 7 total touchdowns. When you have a running back expected to have over 250 touches, catch more than 20 passes, and we expect the offense to be better...that screams value. He also managed to have the 3rd most red zone attempts in the league, so the TDs should increase.

I expect his efficiency to improve in year two. He had a below average 3.7 yards per carry in 2019, but that should increase if the Bears can find better O-Line play this season. Montgomery is a target of mine in dynasty leagues...and if you drafted him last year...I think you have a solid RB2 on your roster you can trust in 2020. I think he will finish as a top 20 RB this season.