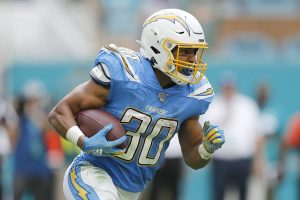 Austin Ekeler was great in 2019...especially in the first five games of the season.  During those five games, Melvin Gordon was holding out for four of them and Ekeler saw the lion’s share of the snaps for the Chargers.  He was on the field for no less than 65% of the offensive plays for Los Angeles in that five game span.  However, after week 5, Ekeler never saw more than 59% of the snaps, hitting a season low of 34% in week 9.

Ekeler was a PPR stud for fantasy owners last season.  Even when Gordon returned to the field, Ekeler was startable as an RB2/FLEX option.  He did have a couple of dud games...notably weeks 6 and 8, when he had a combined 17 yards rushing and 33 yards on 5 receptions in those games.  Even with those games and the return of Gordon as the lead back, Ekeler finished 2019 as the overall RB4 in PPR leagues.

He finished his career season with 557 yards rushing and 3 TDs, to go along with an eye-popping 92 receptions for 993 yards and 5 TDs.  With Gordon now in Denver, it is possible Ekeler receives a few more carries.  However, I don’t foresee Ekeler ever being the kind of RB that runs for 1,000+ yards in a season, but his value is much like Alvin Kamara’s...through the air.

The Chargers return 3rd year RB Justin Jackson, who flashed in limited action last season before he struggled with injuries.  They also drafted RB Joshua Kelley out of UCLA in the 4th-round of the 2020 NFL Draft.  Those two will compete for touches behind Ekeler.

The biggest change...even with Gordon moving on to the division rival Broncos...is the departure of long-time QB Philip Rivers.  The potential future Hall of Famer signed with the Colts in the offseason, so the Chargers will turn to Tyrod Taylor and rookie 1st-round pick Justin Herbert.  How the switch at the Quarterback position will affect the running game is a bit of an unknown.

I’m certain Ekeler will remain a major part of the passing game, but will there be more of an opportunity for him on the ground?  Will one of the other RBs take the carries vacated by Melvin Gordon?  Austin Ekeler had a career high 132 carries last season.  I envision he will probably be around the 190+ carry mark in 2020.  While I don’t see him being a top-5 RB this season, he will definitely have a chance to remain in the top-12 as an RB1.