Are you Teddy for some football?! 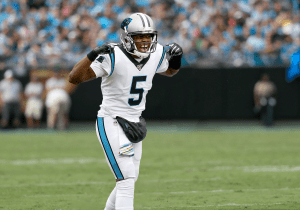 Gone are the days of ‘Superman’ Cam Newton. Gone are the days of ‘Riverboat Ron’. Insert Teddy Bridgewater at Quarterback and Matt Rhule as the Head Coach. With fantasy being a game where you want to rely on history, predictability and opportunity, what can we expect out of the Panthers and this new look offense?

First off, Christian McCaffery. Good at football. I’m not going to tell you something you don’t already know about the league’s most dynamic running back, the top scoring fantasy running back, and in PPR the top scoring player. Nothing should change here, even with the new coaching regime. The Panthers went all defensive in this year’s NFL draft and have signed no one of note behind CMC. All systems are a go once again. Take him in redraft, take him in dynasty, take him everywhere.

The real questions come in with the rest of pieces in this offense. The Panthers just never got off to a rhythm last season going from Cam Newton to Kyle Allen to Will Grier. There wasn’t much that was pretty about the QB play last year in Charlotte. Parting ways with Cam Newton, the Panthers turn to Teddy Bridgewater (originally with the Vikings, horrendous injury, backup to Drew Brees on the Saints). Teddy’s journey is quite the story and he now has a chance to prove himself as a full-time starter. He’ll also have the benefit of Joe Brady calling the plays whom he will be familiar with from his time in New Orleans. In a Covid shortened off season, that could prove to be very valuable. Bridgewater started six games last year in place of Brees while he was injured. In that span the Saints went 6-0 and Bridgewater threw nine touchdowns to only two interceptions. Ball security will be huge for Carolina staying on the field as they had 20 interceptions last season in their final 10 games. Teddy can be looked at as a steady QB2 in two quarterback or superflex leagues.  The longer the offense is on the field, the more opportunities for guys like…

…D.J. Moore. Moore racked up 135 targets, 87 catches for 1175 yards and 4 touchdowns in 15 games (he sat in a meaningless week 17 matchup). All of that with subpar QB play. Before  you read the next sentence please know, I’m not calling D.J. Moore the same player as Michael Thomas. However, Moore is the clear  wide receiver one in Carolina and the routes that he thrives on (slants, digs, outs) are similar routes that Michael Thomas thrives on. Short, quick routes that allow the receiver to get into space and do work after the catch. In six games with Bridgewater, Michael Thomas saw double digit targets in three of those games and in another he had nine targets. This should be a solid pairing. Much like CMC, he’s a viable fantasy player in any format.

Now, who is the third option  in Carolina? Well, it seems the Panthers paid Robby Anderson to come in and take that role (follow the money). He definitely flashed in his time with the Jets and is a deep threat that the Panthers need. Much has been made about Bridgewater’s lack of throwing the ball deep. While his arm isn’t that of Pat Mahomes, I expect him to take his fair shots with Anderson. Robby is best suited as a WR4/5 on your team until we can see what his role is a bit more definitively.

This leaves us with everyone’s fantasy darling of last season, Curtis Samuel and tight end Ian Thomas. Samuel is still only 23 years old and the Panthers did utilize a second round draft pick on Samuel however, that was an old regime and again, they paid Robby Anderson to come in to be a difference maker on the outside. Samuel may have some games or plays that pop but, my guess is he’ll be on the field more in three WR sets, not two, and could see his target share diminish. Ian Thomas on the other hand is taking over a role that is completely vacant as Greg Olsen is now a Seahawk. Thomas has largely played behind Olsen the last two seasons  and will now seize that role for himself. Olsen saw 82 targets over 14 games last season. That wouldn’t be an unreasonable number for Thomas to see if he stays consistent. Again, a player that can benefit from Bridgewater with the intermediate routes. He has potential to sneak into the back end of the TE1 category and can be streamed in plus matchups.

Overall, the Panthers are trending up. Coach Rhule is likely to run a faster, college influenced offensive system  that will have the Panthers running more plays per game. The defense will need to mold with all of the new pieces (and the loss of Luke Kuechly) but will surely improve as the season trudges on. They’re in a division where shoot outs are a real possibility at any point. We all know CMC and D.J. Moore are fantasy assets but don’t sleep on the rest of those Panthers.