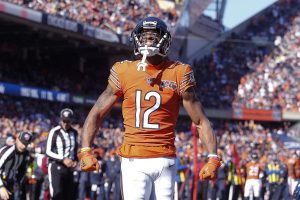 When the topic of top-5 WRs comes up, not many people mention the name Allen Robinson.  If you look at Robinson’s current ADP he is going off the board anywhere from #30 to #50 overall and for the WR position specifically he is typically anywhere from WR9 to WR15.  Those rankings may not seem ridiculous, however Robinson should be going as a top-5 WR overall in any format and anything less than that is a great opportunity to draft for value.

Robinson is just 26 years old (turns 27 later this month) and is in a contract year.  He also was the third overall WR last season in targets with 154 trailing only Michael Thomas and Julio Jones.  His team target volume percent was 26.6% which was also third overall in the league.  He was 6th overall in receptions last season with 98 and two players ahead of him, Keenan Allen and Julian Edelman, are both destined for regression this season.  Robinson also led the league in snap counts for WRs with an average of 64.1 snaps per game.  That likely isn’t going to change this year with Chicago hurting for playmakers and the coaching staff fighting for their jobs.

The most important aspect for Robinson’s continued success this season? The fact that he will be playing with the best QB he has ever had in Nick Foles.  Now this article isn’t an endorsement of Foles, but the fact remains he will be the best QB Robinson has ever played with.  Robinson proved last season that he is QB proof and if he can be successful with the likes of Blake Bortles and Mitchell Trubisky, then he can be even better with Nick Foles.  You should draft Allen Robinson with full confidence this season and know that you are getting a top-5 WR at a WR10 to WR15 price.