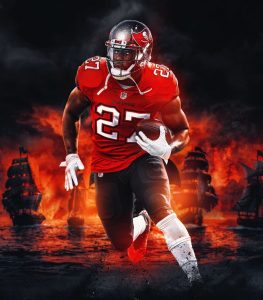 Leonard Fournette is headed to the Tampa Bay Buccaneers....arrrrgggghhhh!  I don't know if he could be going to a more confusing backfield right now.  The deal on the surface looks like it could mean he will be the lead back.  However, if you dive deeper and have paid attention to what has been said, Ronald Jones could be in line for a good bit of work as well.

A lot has been made of videos that surfaced of Ronald Jones dropping passes recently in camp.  If you have read what has been said, HC Bruce Arians has been very complimentary of Jones.  Was the praise just coach speak, while trying to bring in Fournette behind the scenes?  Probably...

Surely, Fournette could have signed elsewhere if he wasn't going to come in and be the RB1 from the get-go.  It had been reported New England was in negotiations with the former Jaguar RB.  Fournette, although a headache at times, has been a highly productive RB.  In 2019, he finished as the overall RB6 in PPR leagues, as he ran for over 1,150 yards with 76 receptions.

I would assume he will come in and be the Week 1 starter, as Tom Brady may have had some influence in the signing if he didn't like what he saw out of Jones.  In a season that was supposed to be the season Ronald Jones broke out, it looks like that plan has probably been shelved for now.  While I don't foresee Fournette having an 1,100 yard season...or even 70+ receptions...I do see him being the main RB in an offense that will put up MASSIVE numbers.  He should be a high to mid range RB2.  Target him as such.