A QB’s Dream and a DB’s Worst Nightmare 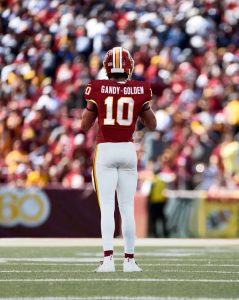 This year's NFL draft was loaded with top end WR talent.  I know this may be premature, but this is quite possibly the best WR class we have EVER seen from top to bottom.  By now you have seen dozens of articles and listened to dozens of podcasts breaking down the top WRs in this year's draft class.  Guys like Jeudy, Lamb and Ruggs are getting all the attention while a fourth round rookie WR is going almost completely unnoticed.

What if I told you that you could use a late 3rd round pick in this year’s Rookie draft to grab a future stud WR?  Well, to be clear, that’s exactly what I’m telling you about today.  Who is this future star WR you ask? Ladies and gentlemen...I give you Antonio Gandy-Golden out of Liberty.

Gandy-Golden reminds me of Brandon Marshall.  Both guys have very similar skill sets, similar size, they both got into the endzone on a frequent basis, and both were 4th round picks.

Antonio Gandy-Golden (AGG for short) is literally good at everything he does, and football is no different.  Any challenge or obstacle ever put in front of him, he has overcome.  Standing 6’4” and 225lbs, AGG catches everything thrown his way.  He’s a QB’s dream and a DB’s worst nightmare. He dominates smaller corners and at his size, they’re all smaller.

AGG is coming off a season where he had almost 1,400 yards receiving (school record), which ranked 3rd overall in college football.  He also averaged 17.7 ypc which was good for 9th overall for players with at least 60 catches.  AGG is a touchdown maker scoring 30 touchdowns over his last 3 seasons.  It won’t even seem fair to defenses with 50/50 balls being more like 70/30 balls for him.  Liberty Head Coach, Hugh Freeze, was quoted saying that AGG is one of the top 5 players he has ever coached.  I think you’re probably familiar with two of those guys, AJ Brown and DK Metcalf.

The most exciting part?  His landing spot is beyond ideal.  Gandy-Golden landed on a team that has no proven TE and no proven bigger WR’s.  They just lost Kelvin Harmon for the season.  Washington's best two best WR’s on the team are both smaller players (McLaurin 6’0” and Sims 5’10”).  AGG immediately becomes the redzone guy and he’s playing with QB’s (Dwyane Haskins and Alex Smith) who will look his way early and often because of his size and large catch radius.

Yes, AGG played against lower-level competition and the jump to the NFL is no joke, especially in a pandemic season, but his work ethic is off the charts. He's driven, hungry, and coachable.  That’s a dangerous combination for any player.  I believe AGG will be starting outside for The Washington Football Team this year and soon be a dominating presence.