One of the biggest free agent wide receivers in this off season went unsigned for way too long.  Finally, Jarvis Landry can call the New Orleans Saints his team.  It’s a new day for Landry.  The kid from Louisiana who also played for LSU is coming full circle now and will be donning the black and gold.  But, what can we make of this signing?  Let’s dive a little deeper into discussing the former second round pick that we know as “Juice”.

While any situation has to be better than the one he’d been in for four years, you have to wonder if it’s enough to kick start his game back to his Miami days.  And while he’s still got lots of football left, Landry is staring 30 in the face.  Elite wide receivers in their 30s are rare indeed.  And above all, are we really expecting Jameis Winston to revitalize Landry’s game?  Only time will tell, but it’s hard to see the light.

While the injury played a giant part in the regression of Landry’s game last season, we can’t simply ignore the poor play that he displayed.  While we can excuse his career lows in things like targets, receptions, yards and touchdowns, there are other problems that are more unsettling.  In 2021, we saw Landry’s lowest receptions per game in his career and with the exception of Mayfield’s rookie year, Jarvis had never had a worse catch percentage.  We can excuse the lack of production with injury, but the lack of efficiency has to be at least somewhat concerning.

If there’s one thing that’s missing from Jarvis Landry’s arsenal of talent, it is the lack of game breaking ability.  While you can normally count on Landry to get you something, he’s not one to win you your week.  And while I tend to be the guy who prefers floor to ceiling, I still need some game breakers on my team.  I’m not suggesting he’s lost his game completely, but after such a poor performance last year, it’s hard to overlook the inability to explode on any given week.  Now this is not new to Jarvis Landry, as he’s never been one to put a fantasy team on his back, but it certainly doesn’t help his case moving forward. 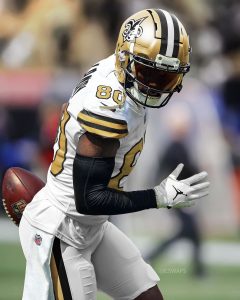 I’d be pretty deceptive to paint such a bleak picture of Jarvis Landry.  Sure, last season wasn’t great.  But, with the exception of Nick Chubb, there weren’t any offensive Browns players that excited any of us in 2021.  As we look forward, it’s important to know that Jarvis Landry is actually quite underrated.  And for any fantasy managers who are sour about drinking the Juice from now on, let me tell you why you should buy.

While he lacks the Super Bowls, MVPs and WR1 seasons, when I say there aren’t many more reliable options than Landry, I’m not kidding.  In case you didn’t know, Landry’s resume speaks volumes.  Excluding last season, in his career he’s only missed one game.  Also, ignoring 2021 and his rookie season, he’s only missed the pro bowl one time.  In fact, there are only 25 wide receivers in the history of the NFL that have more pro bowls than Landry.  Here are a handful of wide receivers with only one more career pro bowl than Jarvis: Calvin Johnson, Reggie Wayne, Randy Moss and Terrell Owens, to name a few.  Simply put, Landry has been and  will be on the field, making noise.

I think I’ve made it clear that Landry isn’t a game breaker, but when it comes to a floor, he’s one of the best.  Last season was the first in his NFL career where Landry had less than 100 targets.  And in his career he’s netting just shy of six receptions per game.  And if that doesn’t speak volumes, he is heading to play with Jameis Winston.  While some may not love Jameis, you have to appreciate that the man loves to throw the ball.  Unlike Tannehill, Mayfield or the slew of backups that Landry’s had to endure, he’s never had a quarterback who just loves to sling it.  And before everyone chimes in about Michael Thomas and Chris Olave, Thomas hasn’t played in forever and Olave’s never played in the NFL.  Are we really that concerned?

Admittedly, I’ve been a bit biased over the years with Jarvis Landry.  When he burst on the scene for Miami back in 2014, he instantly won me over.  I traded him straight up for OBJ; and back then, that was a big deal.  It didn’t hurt that he, as a rookie, landed me a championship that year either.  But, I’ve also been biased on the other side.  Making sure to prioritize Landry each year, it left me wanting as I had valued him too highly.  Always expecting him to soar higher and higher to greatness, it was more of the same or even less each year.

As a real life player, there aren’t too many more respected by teammates, but this is fantasy football we’re talking about.  I, however, truly believe that he will rise to greatness early on in New Orleans.  It’s going to take Michael Thomas time to get back to dominance, if he even can.  We’ve only seen Thomas with the legend, Drew Brees, so one can only guess what we’re going to get with Jameis.  I also feel that Chris Olave will do well right away, but not sensationally.  He needs to get his feet wet at the professional level first.  And with the Saints finally having a deeper receiving core, there will be more opportunities in the passing game, rather than having Kamara run the show exclusively.  Take advantage of early success, while others may be worried about the “muddled” situation.