Shocking Statements - The Jets Can Make The Playoffs

“What??” “Are you a Jets fan?”, “Do you actually watch football?” “Are you seeking professional help?”  I’m sure there are tons of these types of questions upon reading the title of the article.  After all, there aren’t too many franchises who have been basement dwellers like the Jets have been as of late.  But before you scold me or flat out stop reading, I swear there are points in my favor to support such a bold claim.  I promise you there are reasons for optimism when cheering for the Gang Green. 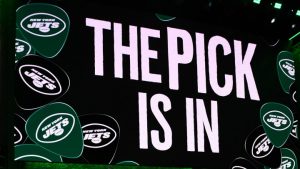 It’s hard to name a team with a better 2022 draft than the New York Jets.  It doesn’t hurt, mind you, that they had three first round picks.  But even with such a good chance at success, Joe Douglas hit it out of the park even better than most could have imagined.

With the first pick, Sauce Gardiner fell to them at number four.  Derek Stingley, who was the first cornerback off the board is elite, make no mistake, but for me Gardiner is the better player.  In a bold statement, I’d be tempted to take him first overall in the 2022 draft.  His numbers are elite, but when you consider the man never allowed a touchdown in his entire college career, that’s someone to get excited about.

They also grabbed Garrett Wilson, who many considered the best wide receiver in a loaded wide receiver class.  I don’t need to tell you how good he is.  Even more crazy is edge rusher Jermaine falling to them at 26th overall.  Simply criminal.  And let’s not forget the Jets snatched up the best running back by a country mile in this year’s draft in Breece Hall.  While Michael Carter is a good option on the ground, Hall is a huge upgrade and should inspire fear in the opposition.  The rest of the draft was also very underrated.

Notably, offensive lineman Max Mitchell, despite going in the fourth round, was one of the best tackles in the draft.  Addressing so many needs that the Jets have, this team is the strongest one we’ve seen in over a decade.  It’s great to have so many high picks, but even greater when they hit so well.

Shifts in the AFC

Logic is a funny thing.  The AFC got way better for so many teams.  For some, logic dictates that this should make things way harder for the Jets to succeed but I think that form of logic is flawed.  The NFL is a division based league, meaning you have to content among your own division above all for success.

So if you think about it, so many of the wins that the Chiefs got last season will not be repeated so easily.  Furthermore, the AFC West is now the most competitive division in the entire league.  This means that every game is truly up for grabs.  Each of the four teams can beat each other on any given night.  There will be less dominant teams for many divisions that are so much more competitive

Let’s not forget that many teams in the playoffs may not retain their level of success.  I see the Patriots, Steelers, Raiders and even Chiefs having a more difficult time playing past 17 games, so a shift is not out of the question.  A nine win Steelers team also made the playoffs last year, so it’s even more possible for the Jets to squeak in there. 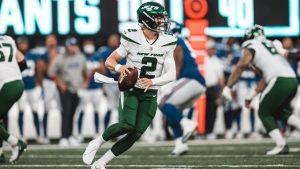 After drafting Sam Darnold second overall, the Jets only gave him two years to succeed before shipping him off.  I don’t see them being as impatient with Zach Wilson.  A second overall investment is no easy thing to look past.  I truly believe that Joe Douglas is all in on Zach Wilson and this can be supported firstly by such a draft.

But notably, although Wilson’s lack of success was obvious, the reasons are also just as obvious.  The Jets employed five starting running backs last season, eight wide receivers and five tight ends.  Of those personnel, only Braxton Berrios and Ty Johnson played a full season.  Of the actual “starting” running back, wide receiver and tight end, many games were missed and not many were missed together.  Success is difficult without your best players on the field consistently.

It isn’t all doom and gloom though, at the end of the season, the offensive line was ranked 11th by PFF.  The Jets also had the youngest team in the entire NFL last season, so a year of bumps and bruises goes a long way into seasoning talent to what it will eventually be.  Moving forward, I just don’t see the level of failure repeating itself.

While it’s insane to think the Jets are contenders based off of one good draft, it’s not out of the question to consider the impact these studs will have on the team.  Sure, the Bills will win the division and Miami made its own moves to strengthen itself.  But it won’t be the Jets being taken apart like a dog on a three legged cat.  The same old Jets are simply not the same old Jets.  Of their losses last year, five of them were by a touchdown or less and the losses to Carolina, Atlanta should be wins this year.

I’m not crazy, believe me.  The Jets will not have an easy road to the playoffs, but

it’s not as crazy as you may think that they could get there.  Crazier things have happened, right?