Isn’t dynasty the best format for fantasy football?  I don’t know why anyone plays any other version.  There’s just something about managing a team that will be with you for as long as you see fit.  And while some like the “reset” that each new year brings in redraft, I’ll never understand the appeal of losing what I worked so hard to get.  No matter what type of fantasy football you choose to play, finding values is essential.  For those of us who play dynasty, we can pretty much make moves whenever we want, so this is a big advantage over those who hibernate from fantasy football in the offseason.  Today, let’s delve deep into the caverns of the AFC North to look for the best value player each team has to offer.  This is my second favorite division, so I’m excited. 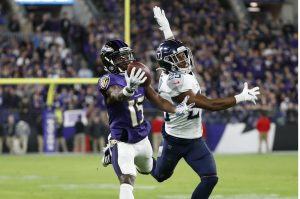 If we’re being honest, the Baltimore Ravens overall are underrated.  Aside from Mark Andrews, many of their skilled players just aren’t given the respect they are due in drafts and trades.  So finding values is a lot easier on this team than others.  The only issue is picking the best value in Baltimore, and for me it has to be Marquise Brown.  While so many are flocking to Mark Andrews when it comes to seeing talent, don’t be foolish and overlook Hollywood.  In fact, among wide receivers, he’s one of the better values in the entire National Football League.

Marquise Brown, despite all his talent, will always be seen as that guy who is the team’s top wide receiver, but one that will always struggle for consistency.  Whether it is Mark Andrews taking so many of Lamar’s targets or the butter fingers that Brown showed last season, not many have the faith that they should in Baltimore’s top wide receiver.  If I’m being completely honest, will Marquise Brown be a top ten wide receiver next season?  The answer is not likely.  But that doesn’t mean that he won’t be a solid WR2 with upside for a WR1.  And if one more person tells me that Rashod Bateman is taking over, I might lose my marbles.  Make no mistake, not only will Marquise Brown be a steal for you, he’s the best steal on the Ravens roster. 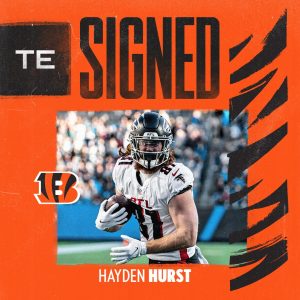 I can still hear “who dey” in my sleep after last season’s Super Bowl appearance for the Cincinnati Bengals.  I’m not sure where all these fans came from, but they sure did make an appearance.  I am a little biased here as the Bengals are my second favorite team, but if you don’t at least own a piece of this offense, you are doing yourself a great disservice.  It would make sense to put the likes of Tyler Boyd or even Tee Higgins here, as many seem to forget anyone other than superstar Ja’Marr Chase are in Cincinnati, but I’m going to suggest Hayden Hurst as the best value here.

I know it sounds crazy to say it.  After all, despite being a first round draft pick by the Ravens, he hasn’t had the success that Baltimore predicted when they took him before they even took Lamar Jackson.  And his time in Atlanta certainly didn’t bear fruit, so why believe in him now?  If you saw what Joe Burrow did with CJ Uzomah last season, you’ll see the logic.  Uzomah was always a good tight end, but his stats didn’t reflect it.  Last season, in his only full go with Burrow, we watched Uzomah crush career numbers and be leaned on in critical situations.  I think Hayden Hurst is headed for a resurgence in one of the league’s most high flying offenses and, at the hardest fantasy position, he’s probably gathering dust on the waiver wire as we speak. 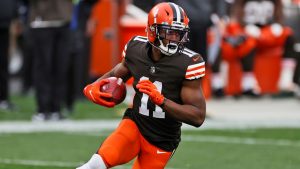 We’re headed for a new era in Cleveland here, folks.  Although Baker Mayfield is still with the team, Deshaun Watson is now in town and they will revamp anything and everything for him to be successful.  If you’ve forgotten or didn’t know, the haul that the Browns gave up for a guy who hasn’t played in over a year, had massive legal issues and problems with his old front office is truly unprecedented.  I’m not going to comment on any of it, but I’m just saying, the Browns are completely invested in Watson.  Although the Browns will most likely bring in wide receiver talent through free agency, trading or the draft, I think we should be investing in what’s there now.

The days of OBJ and Jarvis Landry are history.  Until there is new movement, the top option for Deshaun Watson is none other than Donovan Peoples-Jones.  The statistics aren’t jaw dropping, but let’s consider he was playing behind one to three other players at times last year and was receiving from a quarterback who didn’t best utilize his talents.  Under this new offensive regime, I am completely certain that  Peoples-Jones will crush it.  Now's the time to pounce and grab a guy who did very well considering his circumstances last season.  I also believe, though it saddens me, that Nick Chubb will be a little less involved considering Watson’s style of play versus Mayfield’s.  The path is clear for Peoples-Jones to shine and shouldn’t it be for your team? 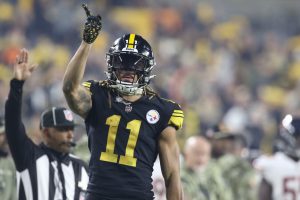 Up until two years ago, the Pittsburgh Steelers were my real life favorite team.  I have seen so many Big Ben to Antonio Brown touchdowns that I can’t even count.  Many fans haven’t even seen their team win a championship and I’ve seen a few, so they were good times.  Needless to say, I’ve moved on to another team we’ll discuss in the next article so I feel that, for the first time, I can be completely unbiased about Pittsburgh and what they have to offer for your fantasy team as far as values.

It is very tempting to put MItch Trubisky’s name here, but I just can’t until after the draft.  If I knew that Pittsburgh had not taken one in the draft, I’d be writing about Trubisky, but I can’t sell the farm on him just yet.  With that in mind, I turn to Chase Claypool.  I have the world of respect for Diontae Johnson, and although he is undervalued, the blindness toward Claypool’s talents is even greater.  Mad respect for Big Ben, but it wasn’t good these past couple years, so Claypool’s value will not go down in the receiving game.  It will go up substantially as JuJu is gone and Claypool is the true number two option.  I also love the fact that Chase is so involved in the rushing game.  While he’s not at Deebo Samuel level, Claypool’s no slouch in that regard.  With uncertainty at quarterback and an attempt to save Najee’s strength a bit, I think Claypool is more used as a rusher as well.  Make the move for Chase Claypool.