It’s official.  April is one of the strangest months as a dynasty fantasy football fan.  It’s been long enough after the season to have done tons of start ups and mock drafts, but we’re still a long way away from the NFL Entry Draft.  So even though we’ve done tons of drafts, made many moves and performed our best tricks to improve our squads, we’re at the point where many are pretty much done.  Here’s the rub: if you’re done now, you’re sleeping on primetime to make moves.  With so many managers in neutral gear, now’s the time to rev it up.  Every team offers values for your fantasy squad and the AFC East is no different.  Here are the best values in the AFC East in dynasty. 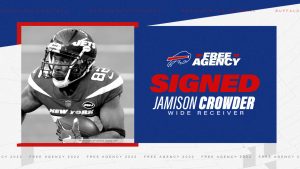 It’s no secret that the Buffalo Bills are the team to beat in this division.  Boasting the best quarterback in the league for many doesn’t hurt.  Add in a deep receiving core, throw in an underrated running game and sprinkle in a dominant defense that keeps the Bills offense on the field, everyone should want a piece of this team in fantasy.  Everyone knows Stefon Diggs is good and it’s common news that Gabriel Davis is the “breakout” on so many lists right now, but there’s a name that not many are even talking about.  I didn’t even notice that Jamison Crowder had signed with the Bills at the time, but you should take notice.

Jamison Crowder isn’t the most exciting name in fantasy, but if he was ever on your squad while healthy, you know exactly what he brings to the table.  It is true that he has struggled with injuries, but the talent is fantastic when he’s on the field.  Truthfully, Crowder has never been able to benefit from elite quarterback play up until now.  Despite receiving catches from subpar talent, he’s performed extremely well in the slot.  And now that he’s with one of the best, he’ll shine even more.  You can argue that the slot receiver is undersized, but he’s bigger and younger than Cole Beasley.  Beasley, also a slot receiver, is now gone; vacating his plus 100 targets every season with Josh Allen.  It’s time for Crowder to feast, and he’ll cost you pennies on the dollar. 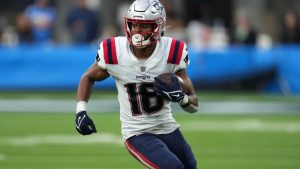 Bill Belichick is a genius, that much can’t be debated.  His mind is just different from anyone else in the game and his resume is proof of it.  Even though I question his moves sometimes, because I’m just a schlub, he clearly knows more than me.  I wondered why certain players just couldn’t stick or highly drafted talents weren’t given more opportunity, but if it’s my mind versus Bill’s, I have to concede defeat.  It’s for this reason that I continue to buy Jakobi Meyers everywhere I can, as Belichick trusts him on the field.  Some of you may argue that Meyers was a bad buy before Davante Parker came to the Patriots and Meyers should be avoided even more now.  But to that I say, the timing is even better.

Jakobi Meyers is never a name that instills excitement in the fantasy community.  But there is one main reason that he excites me.  Despite playing for a rookie quarterback who took time to learn and grow, Meyers was very consistent.  And while he lacked the touchdowns last season, I have faith this statistic will improve.  We’re also forgetting that Davante Parker, while extremely talented, is incredibly inconsistent.  While this is largely due to injury, I’d rather have a steady player like Meyers.  While others are pawing at the “discount” in Parker, make sure you get the real discount in Jakobi Meyers. 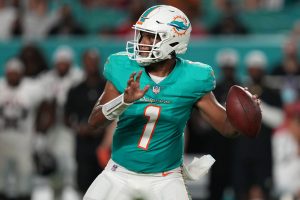 Amid all the controversy and excitement of this offseason, some names are getting a lot of press.  Real life scandals and big trades have taken the forefront, so it’s even harder to focus on what makes our fantasy squads better.  The Miami Dolphins are a team that I thought would contend last season.  And while I looked very foolish early on, as the season drew to a close, I was looking more intelligent.  There were many players to take the blame for Miami’s losses last year, but I don’t think anyone blamed Tua Tagovailoa more than any other player on the Dolphins.

“So if he’s so terrible, why are you suggesting him as a player to acquire?”, asks the eager reader.  We have to remember that we are looking for values in this article.  If I were looking for a top tier starter, Tua wouldn’t be on this list, but as a discount QB2, he’s right at the top.  If Jaylen Waddle is so good, we have to place a value on Tua.  Miami has made many supporting moves this off season to give Tua his best chance at success.  And, the biggest reason of all, the Dolphins traded for Tyreek Hill.  These moves should have made owner’s salivate at the chance to roster him, but in the backs of most people’s minds, they’ll still say, “but it’s Tua”.  Don’t be one of those fools who can’t see the sure progression of the guy Miami took instead of Justin Herbert.  They’re invested and you’d be foolish to not invest at this price. 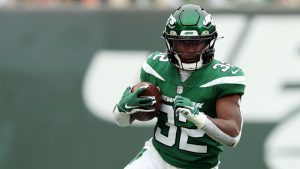 There are a lot of things that come to mind when you think of the New York Jets.  The real life fans have been through the fire with this franchise.  It must be truly maddening watching such highly touted prospects flop or leave your team in the basement.  But make no mistake, there is still treasure to be dug up on the Jets squad.  The most valuable Jets player is one of two in most people’s eyes.  One being wide receiver Elijah Moore and the other being running back, Michael Carter.  It’s funny in a way, because I see Moore as overpriced in drafts, while Michael Carter is not.  And even though he’s not “cheap”, he offers the best value on this team.

2021 was in many ways a terrible year for Michael Carter.  The Jets were, once again, one of the worst teams in the NFL.  Carter also spent a large portion of his rookie season on the mend.  But while others might see him as an injury risk playing on a horrible team, see him for the talent that he is.  The path for Carter to succeed is clear.  He’s young, has no true competition and is one of the only talented options to lean on.  Finding a starting running back for a discount is not easy, so it’s essential to take advantage when you can.  There are hurdles for sure, but Michael Carter is not one who is being held with tight fists by many managers.  This opens the door for you to make an attempt at gaining Michael Carter for way cheaper than he should be.