One of the biggest issues plaguing fantasy football managers is a lack of knowledge on tough decisions to be made.  Sure, the experienced, knowledgeable and savvy of us out there know what to do or at least have an inkling of what to do moving forward into the off season, but there are many out there who struggle with what to do when the season is done.  This off season, instead of sitting idle or, even worse, making terrible decisions, look for the best possible values to seek out.  The elite options are too expensive and many flier options have too much uncertainty.  Here is a player from each team in the NFC North that should be drafted or traded for due to their substantial dynasty value. 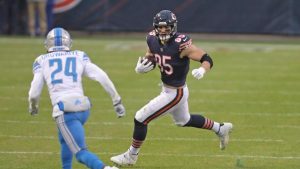 Much like Kenneth Gainwell, Cole Kmet is the other player I simply have to acquire everywhere if at all possible.  But even more than Gainwell, Cole Kmet is a must have prize piece as the tight end position is almost as maddening as the kicker, (if you’re crazy enough to play with them).  A great source of frustration for many managers, it’s feast or famine at tight end, save the elite few.  So, finding a tight end at a discount is essential to a fantasy championship caliber team, and I think this rings even truer in dynasty.

It’s glaringly apparent to me, but in case that isn’t ringing true for you, Cole Kmet is arguably the best value in the entire league.  I preached the absolute need to acquire him as the gospel truth in the dynasty dilemma I wrote, if you want more detail.  The situation is perfect, his age is divine and the skill set is incredible, so why isn’t everyone and their mom aching to acquire such a talent?  One main reason is that the average person doesn’t have the knowledge on how to find great tight ends.  The other is the fact that Cole Kmet scored exactly zero touchdowns last season.  Touchdowns are the most volatile statistic in the fantasy game, so take that with a grain of salt.  If you are ever going to listen to my ravings, this is the one you can take to the bank. 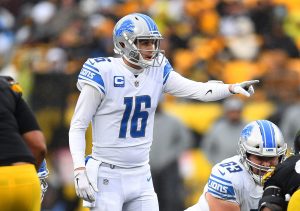 I don’t believe there are many who are excited about the former first overall pick.  The name Jared Goff doesn’t bring inspiration and desire to most fans, regular and fantasy alike.  And looking at the team overall, it’s not one that most people have penciled in for success.  The problem is that the argument that Jared Goff is trash is simply not logical.  It’s a thought process based entirely on emotion.  Whether you just don’t get excited by the apparent lackluster play or there is some hateful notion from real life fanhood, we have to keep our heads about us as fantasy managers.

It’s quite irrational, because everyone knows just how good of a pass catcher D’Andre Swift is.  Many have him crowned as a top three option in dynasty among running backs.  It’s also no secret just how good TJ Hockenson is.  And many have high hopes for Amon-Ra St. Brown, albeit it’s a mixed jury.  If all are so good, how can the quarterback do so poorly?  Now, I’m not saying that Jared Goff will ever be a bonafide game breaker, but as most people are playing superflex, getting a quarterback, even a number two is not cheap.  There is a chance that Detroit goes after a quarterback in the draft, but even if Goff is only around one more season as a starter, at his price, he’ll do nicely as a temporary fix.  And if he does get traded, he can’t be dead at only 27 years old.

Since Matt Lafleur came to town, the Green Bay Packers have won 13 games each and every season.  It’s no small feat in today’s NFL to achieve such a standard with parity being what it is.  Moving forward into next season, I’m sure that trend will not continue.  Finding talent on the Packers’ squad in fantasy is not impossible, but most of the talent is priced too highly to get a good value.  Sure, you can go for Aaron Jones as he’s getting older and AJ Dillon is emerging, but in dynasty, we want more of a long term solution if we can help it.

As both Davante Adams and Marquez Valdes-Scantling have moved on from the team, it begs the question as to whom Aaron Rodgers will be throwing to.  I think most have tagged Alan Lazard as the top bet for most targets, but I’m sure Rodgers will be throwing to more than he and Aaron Jones.  So, we have to turn to someone else.  I say, have a little faith in the other A. Rodgers.  Amari Rodgers has done admirably as a kick returner and although he hasn’t seen the opportunity really outside of special teams, he’s the one I’m most excited about.  Any receiver catching from A-Rod is worthy of a gamble.  And even though he’s unproven, this makes Amari Rodgers the best value on the Packers. 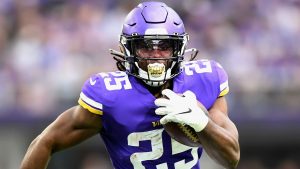 Much like Chuba Hubbard, Alexander Mattison is stuck behind one of the league’s most elite workhorses.  Dalvin Cook reigns supreme on the ground in Minnesota and I don’t believe he has plans of stopping that trend any time soon.  The Vikings also have who some consider the pass receiving tandem in the league in Justin Jefferson and Adam Theilen.  The depth is also one of the best in the league at wide receiver.  So with so many hurdles to overcome for his success, Alexander Mattison will have a difficult time shining right now.  But in dynasty, however, this situation is ideal for grabbing him at his current value.

Again, similar to Hubbard, Mattison is in a situation where he is behind an oft injured running back.  And Mattison shares another similarity to Hubbard, as Mattison performed well in his time as the temporary starter.  I do see less of a chance of Dalvin Cook’s workload going down, but I also see more of a chance of long term value in such a good system.  While Mattison’s value may not ring true immediately save a Cook injury, the long term potential is too good at his current discounted value.  If you’re looking for value on the Minnesota Vikings, look no further than running back, Alexander Mattison.