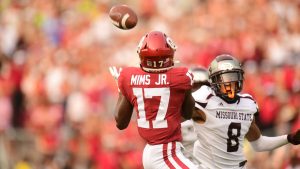 Marvin Mims is a former 4* WR recruit from Frisco, TX. The 2020 recruit was originally headed to Stanford before decommitting and landing with Lincoln Riley and the OU Sooners. Mims is 5’11, 177 lbs and has only recorded 69 receptions in his first two seasons at OU. He’s also caught 14 TDs. For those doing the math at home that’s correct, more than 20% of his receptions end in paydirt.

As a sophomore, he averaged 22 ypc. That’s wildly impressive and speaks to the home run ability Mims is capable of. Mims tape is a tough evaluation because he’s never jammed at the LOS so you’re unsure if he can consistently win on that type of coverage. He doesn’t really face it. What is apparent is he has incredible body control and consistently takes the top off of the defense.

Mims possesses incredible YAC ability as well and would particularly excel in an offense that utilizes play action and RPOs.

What really interests me about Mims is that he didn’t leave. He had every opportunity to. Rattler left. His head coach who recruited him left. Caleb Williams left. Everyone tagged Mims to be the next great talent on the OU roster to become another “hired gun” in the new age NIL college football landscape. He stayed at OU though. I think it speaks to his character, it shows the competitiveness he has and what he brings on and off the field.

Ideally, I’d like to see Mims add 10 lbs before he reaches the NFL draft. He reminds me though of a former 5th round pick that had to work on his route running ability. That guy is now a perennial top 10 WR in the NFL. He reminds me of Stefon Diggs.

I'm interested to see how he does as the true #1 on this offense this year in which he will be the best playmaker on the roster. He’s shown the ability to hit the home run, I’d like to see him move the chains a little more while winning at the LOS. He is being touted as a top 10 WR prospect in the 2023 draft. He will be a nice value in the 2nd round in your rookie drafts. This class is getting deeper and deeper with every evaluation.