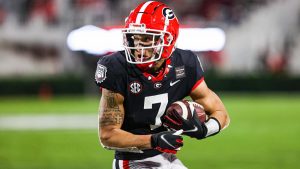 Jermaine Burton, originally with the National Champion Georgia Bulldogs, hit the transfer portal after his Sophomore season and ended up in Tuscaloosa.  Burton is a former 4* and top-100 WR prospect out of California, who had big expectations upon his arrival in Georgia.  He never quite reached his potential in Athens due to a couple of injuries, offensive scheme, and inconsistent QB play.

After leading all Bulldog WRs in receiving yardage in 2021, it became abundantly clear that he would never really see much more of an opportunity in Kirby Smart’s run-heavy offense.  In two seasons, Burton finished with 53 receptions, 901 yards, and 8 TDs…all numbers he could (and should) reach in a single season with Alabama.

Now a part of the Alabama Crimson Tide, the former Bulldog will finally have the opportunity to become one of the top WRs in the country.  With Heisman Trophy winning QB Bryce Young slinging him the rock, Burton should continue the Tide’s tradition of having one of the nation’s top WRs.  If that is the case, then he will also become one the top NFL Draft prospects over the next season.