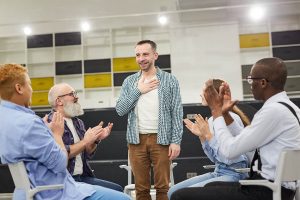 Hello everyone. My name is Zach, and I am a trading addict. Rather than the typical 12 step program you may be thinking about, I am here to provide 4 steps to create more addicts. Why, you may ask? No matter what format or type of league you are in, trading is the path to success. You can win your league without it every once in a while, but trading increases your title count and makes fantasy football even more fun, which should not be possible.

Understand every fantasy football player values players differently.. I am a big A.J. Brown truther.  had D.K Metcalf, Davante Adams, or DeAndre Hopkins, and I was offered Brown for any of those guys, I would take it because of the belief I have in him. A divisive player in the fantasy community is Chase Edmonds. I believe in him to be the RB1 for the Cardinals. While many people believe he is not fit to be a bell cow, I am buying him even though he is not super proven. My point is everyone has different rankings and evaluations of talent, situation, and projected volume. Take advantage of this and get the guys you love preferably before they have a breakout campaign.

Attack weakness to gain value. When someone goes down to injury, send offers to the wounded. When Saquon Barkley went down for me in a dynasty league last year, I traded Kenyan Drake and Chase Edmonds for 2 2021 first round picks. Those picks turned out to be the 1.02 and the 1.05 this year. This year Kenyan Drake is not even a starter and Edmonds is not a locked and loaded starter even though I believe otherwise. I had another dynasty roster where I went into my season with Drew Lock and Gardner Minshew. Needless to say, I needed help on an otherwise strong roster when Week 8 came along because those two were putting up 8 points a week. Therefore, I overpaid for a share of Jared Goff. I sent a 1st round draft pick and man, did I overpay. Someone exploited my weakness. It is a game of finding the weak points and taking advantage of them.

Accept trading leads to deeper friendships and better leagues. You get to converse with your league mates more than ever and have great discussions. It adds another dimension to the game of fantasy football. When I get a trade offer, I get really excited; it gives me a chance to make my team better. Talking through trades is so much more enjoyable than waiting for your waivers to clear once a day and hoping you won the hot player of last week.  If someone rejects a trade offer, the negotiations are just beginning. Try again, but this team, send them a message on your platform or via text to start dialing in on what they may want. Being in trade negotiations to me is like fighting a boss in a video game. You are trading blows and changing strategies until - BAM! - you either figure it out and beat the boss, or you lose a life and need to rethink your strategy. Some of the best football conversations I have had came from trade negotiations and I have made a lot of friends because of them. Don’t let this opportunity slip away.

Grieve for a team needing to be dismantled while reveling in the opportunity to trade. I adopted a dynasty team which missed the playoffs by a long shot, so I became the Scar Face of trades. Here is the roster when I started:

Now look where my team stands: 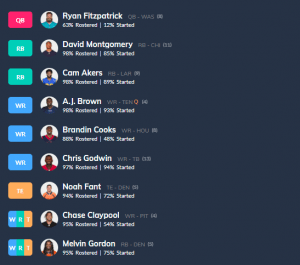 I have some good young players and I have 3 high capital picks in the 2021 rookie draft.  I can build on my young players and should be a much better team walking into this season. People the closer the rookie draft gets the more capital they want in it. In other words don't be afraid to float your draft picks out there to see if someone will overpay. I used draft capital and players  I did not value as much as the rest of the fantasy community and grabbed some future key players to create my championship roster. Rebuilding is near impossible without trades in fantasy. Just look at the difference a few trades and negotiations made on this dynasty roster

Trades are the lifeblood of dynasty leagues for me,  and they are incredibly fun, beneficial and are all together just great. If you do not trade much, maybe send a few offers and get in the trading game. You will realize how fun and beneficial it is and soon you will be writing your own article on why you are addicted to trades!

So don’t forget to send some trade offers, because dynasty never rests!