2023 Offseason Look Ahead: Running Back Part 1

The 2022 NFL postseason has begun as well as the beginning of the dynasty offseason. The early process of building out a rookie draft board and evaluating your team's chances for the 2023 season. It is a fun time of year where hope springs eternal for your team whether rebuilding or competing for the championship this year. Knowing how your team will look after the offseason is easier said than done. The lead back this past season may not be the lead back next season for many backfields. This week we are going to focus in particular on the lead backs as we look ahead to the offseason in front of us.

Like with the Quarterback discussion, we need to discuss the assumptions we are working with. I will take a different approach with the RBs though. I am assuming all the pending FA RBs will in fact hit free agency. Obviously teams can sign or franchise a guy but that takes one guy out of the free agency pool and one lead running back seat out of the ecosystem. Unlike quarterbacks though, running backs are much more likely to hit free agency even after a big season. I am also aware a few teams could cut RBs as cap savings or to move towards a rebuild like Dallas, Tennessee or Tampa Bay.

At a glance, these are the teams that could be in the market for a guy to lead the backfield (get at least 55% of the RB touches):

Obviously teams like the Raiders and Giants could franchise tag or keep their star RB but for the sake of argument let's say they walk. We will also have at least one team sign or draft a guy that we like that could hurt both of their values. We see it every single offseason. Finally we could have some teams just roll with what they have there already. For Example, KC with Pacheco, Las Vegas with Zamir White or Chicago with Khalil Herbert. So it looks like we have eleven teams that could be in the market for a lead guy in their backfield. At the time of writing, I see about eight guys I believe are good enough in free agency to warrant 55% of the touches. This opens up about three spots for rookies (in a good RB class as well) or fringe starters. We expect more than three RBs in this class to be main guy material so some of these guys will end up with a smaller workshare. Let’s discuss the potential lead backs now. 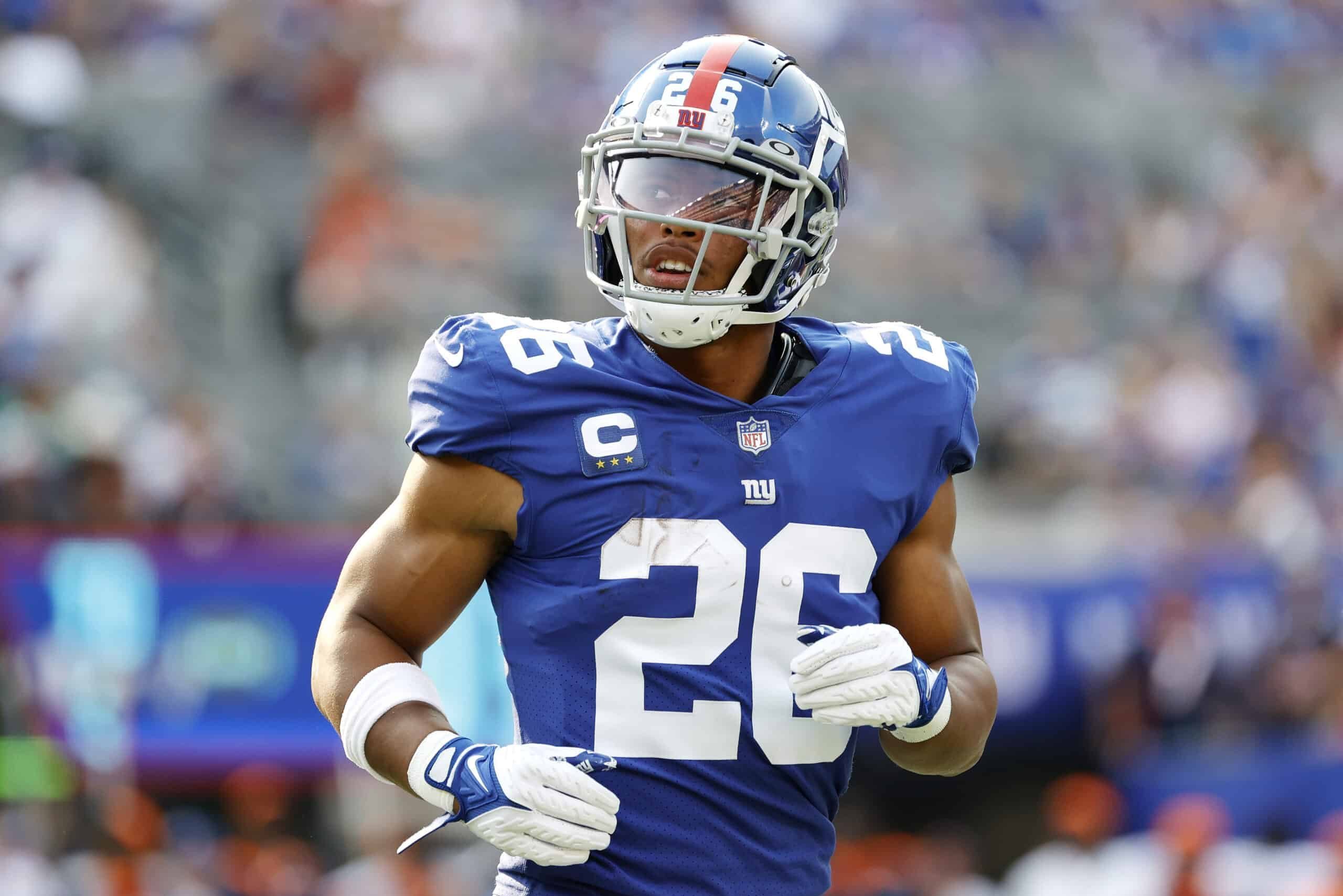 The prized jewel of the free agent class. Saquan Barkley is everything you could possibly want in an elite running back. I think the most likely scenario for him is to be franchise tagged by the Giants but assuming he does hit the market, I think the most exciting landing spot is Miami. With the threat of two of the fastest in the league on the outside, it will be hard for teams to bring a safety into the box to deal with Saquan. The Dolphins would have perhaps one of the most terrifying groups of skill players in the entire NFL. That being said, he feels landing spot proof. The unique talents of Saquan Barkley are going to produce fantasy points wherever he plays at.

While I think there is a good chance the Giants keep Barkley, I do think the Raiders may be willing to move off of Jacobs. With their QB situation an issue and Jacobs not likely to do any favors after his fifth year option was declined by the team, it seems likely that Jacobs will hit the market. He will draw attention for anyone looking to beef up their RB room. I like the idea of landing him in Philly to complement that group of offensive weapons and take over for fellow free agent running back Miles Sanders. I am not sure what his passing game usage will be wherever he goes but it likely cannot be less. Jacobs has shown to be consistently able to produce between the tackles so no matter where he goes, he is sure to get a large workload.

The real best spot is Kansas City for Hunt’s skill set but given his history with the Chiefs, I do not foresee that coming to pass. If Kareem Hunt were to sign in Buffalo, his value would skyrocket to the moon. Granted, most RBs would get a boost being put in an offense like Buffalo’s but Hunt in particular has the perfect skill set to really succeed in that offense. He can both run between the tackles and catch the ball out of the backfield. Operates at his best in space which will be provided in ample amounts thanks to the Bills spread offense. We have been waiting for Hunt to get a backfield to himself for a while now, hopefully this offseason he finally does.

Another location that would help a lot of RBs value provided they can beat out Pacheco for the job. I know a lot of people are high on Pacheco but I think Miles Sanders is clearly the better talent. Miles Sanders could give the Chiefs yet another source of offensive explosion to complement the aerial assault provided by Patrick Mahomes. A lot of this redzone nonsense the Chiefs do could really suit Sanders athletic skill set. Miles Sanders gets a weird reputation in the dynasty community but I think a lot of that has to do with his inconsistent volume in Philly as well as freakishly bad touchdown luck in 2021. This season Miles Sanders has been very solid for fantasy managers and more than paid off his offseason ADP. I look forward to seeing where he lands in 2023.

I have tried really hard to not just list the same places multiple times but the Miami job would be good for a variety of players. Montgomery would fit so nicely in the scheme the Dolphins run. With Saquan Barkley, he will be successful wherever he goes because of how far above the curve he is at everything. Montgomery however, will be a bit more landing spot dependent. I don’t think he needs to be in an offense that heavily uses their backs in the passing game, he just needs to be in an offense that is efficient when it runs the ball. The landing spot of Miami would give him ample opportunity to succeed without too much competition for reps in the backfield. 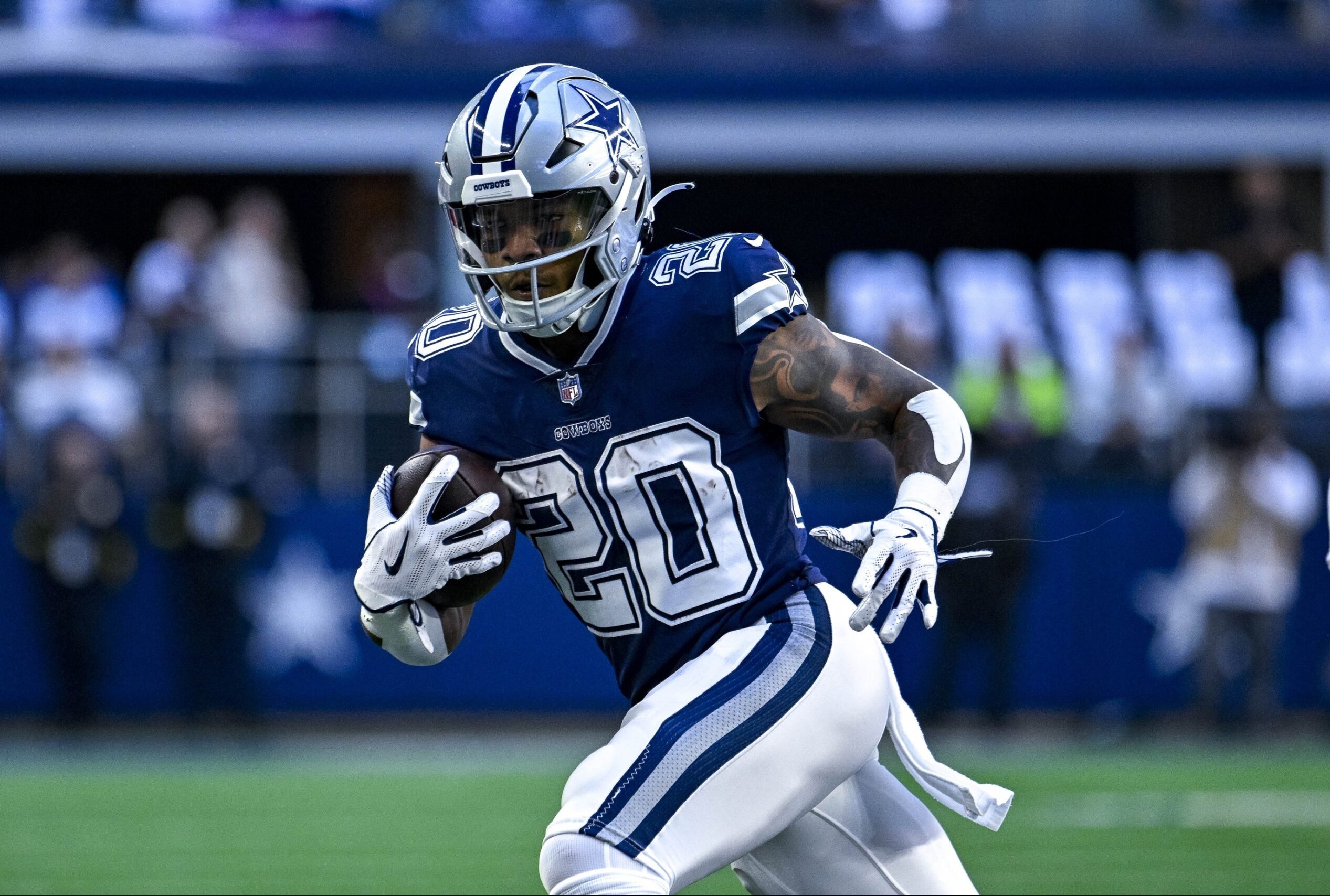 This final tier is guys that will have to get lucky to avoid a committee situation where they are the 1B. At the top of this tier is Tony Pollard. Pollard has been usable in fantasy despite being the second fiddle in the Cowboys offense thanks to his big play ability. Similar to the reasons for Miles Sanders, Pollard could give them more access to explosive plays out of the backfield. His offseason value could have a massive spike even if it isn’t Kansas City that he lands in. If you want to buy him this could be the last window to do so. You are taking on risk that the NFL sees him as a complementary piece and not a full time guy, but the upside in the right situation is hard to ignore. 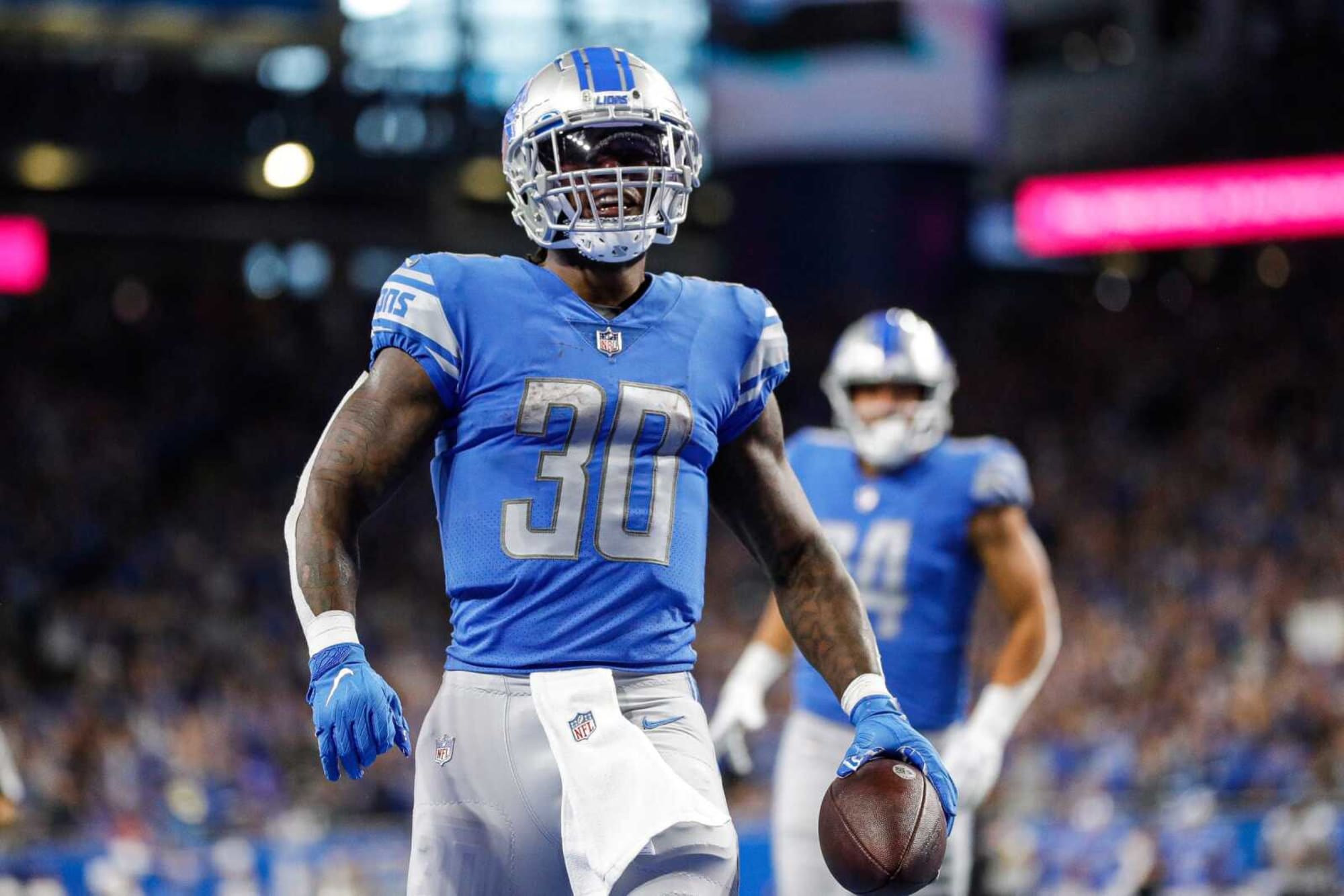 Jamaal Williams has been awesome in fantasy football for us this past season. A word of caution though, a bulk of his fantasy scoring has come from scoring touchdowns. The issue is that those are difficult to repeat. His best hope is to land somewhere that he will get most of the work near the goal line. I think the Giants could provide such a home if Saquan is off somewhere else to get a payday. While Daniel Jones possesses mobility, he is not built for running near the goal line like some of these other bulkier mobile QBs like Hurts and Allen. The Giants also lack elite pass catching options to trust in the red zone. Jamaal Williams could be used to grind out wins with that improving defense and play complementary football. 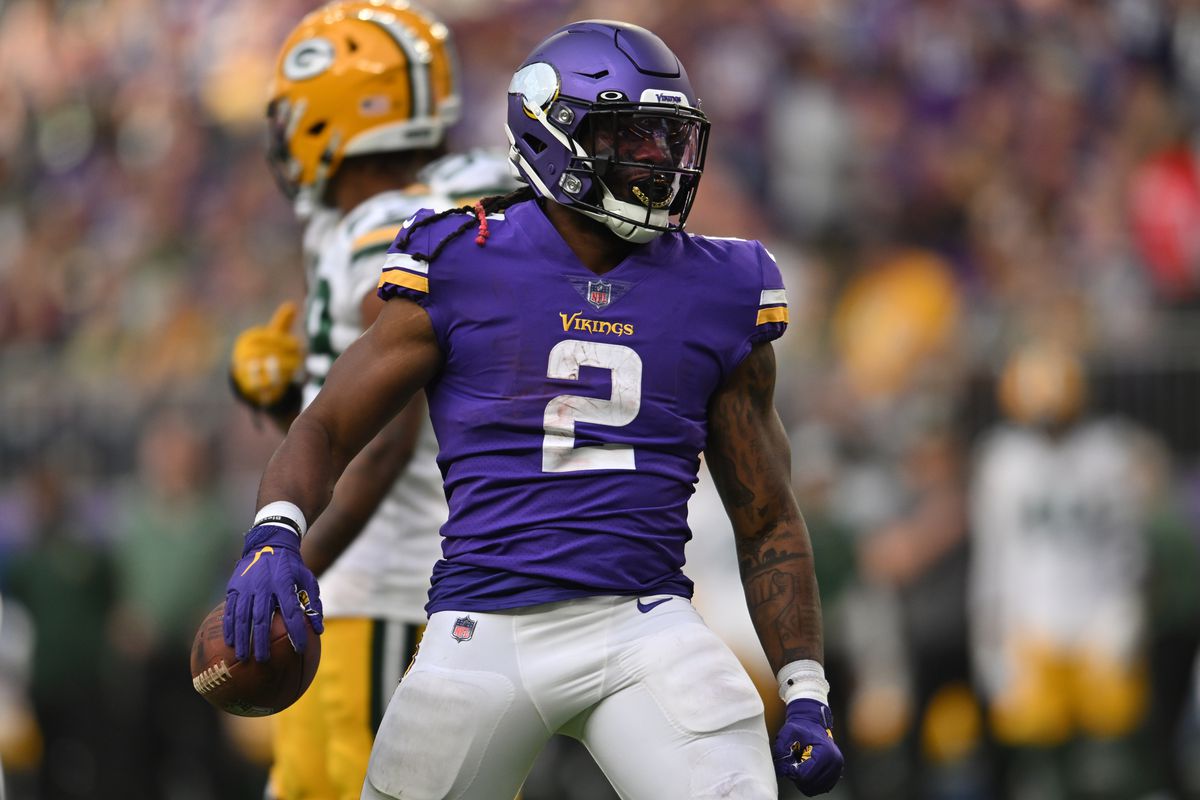 Within the Vikings’ locker room, Alexander Mattison has the nickname the “sous-chef.” Throughout his career, Mattison has been an elite handcuff option for Davlin Cook managers. This offseason, Mattison will get a chance to dip his toes into the free agent waters and perhaps be a backup no more. Every time Mattison has had an opportunity he has been terrific. If he could ever get consistent volume perhaps he could make the jump. The idea of him landing in Chicago makes a lot of sense to me. A team without a ton of good pass catching options that is likely to be a run first team next season would really be good for Mattison. The difficult part about this landing spot would be beating out Khalil Herbert for more touches. If he can, I could see him being very successful and help give the Bears a physical identity to match the environment of Chicago in the cold winter months.

While the upside of some of these guys is clear, I would approach with caution. Like I said before, at least one of them will get into a bad situation because a team drafts another back or signs multiple. The tier one guys I feel confident in wherever they land. The tier two guys have me reasonably confident but aware that they could get beaten out by a rookie or end up in a committee situation. Some of the tier three guys will land a gig all to themselves while I believe that some of the tier three guys will end up splitting the workload. I will see you next week with the complementary backs of this free agency class! Good Luck and Happy Trading!