The Philadelphia Eagles are in a full-blown rebuild being only one year removed from being a playoff team. That is how quickly things can change in the NFL. The Eagles have many roster needs and now with a new head coach, new offensive and defensive coordinators, and new franchise QB hopeful, the Eagles embark on a quest to return to a playoff caliber team! Sitting at #6 overall, the Eagles could have gone a zillion different directions with which position to target, but they decided to make a pre-draft splash. Philadelphia contributed to the pre-draft trade madness by completing a trade with the Miami Dolphins to move from 6th to 12th overall in exchange for a 2022 1st round pick. This came directly after the Dolphins dealt with the 49ers to move from 3rd to 12th and then back down to 6th overall! There was plenty of pre-draft speculation that the Eagles weren’t done making moves as GM Howie Roseman is one of the most aggressive draft day trade dealers. Sure enough, the Eagles made another move…

In a very strange turn of events with the division rivals (Cowboys, Giants, and Eagles) picking back-to-back-to-back; the Cowboys at #10 traded back to #12 with the Eagles (who gave up a 2021 3rd round pick), so the Eagles could leapfrog the New York Giants at #11 to draft the Heisman winning Alabama WR DeVonta Smith! This clearly jostled the Giants plans since they immediately traded back to #20 to give the Bears the #11 pick.

DeVonta Smith and his easy speed is a dream come true for the Eagles at #10 overall being the 3rd WR selected! Smith fulfills the Eagles’ glaring need at the WR position and was the first pick of several that suggested that the team is committed to building around 2nd year QB Jalen Hurts. Smith becomes the de facto WR1 for the Eagles offense as he reunites with Jalen Hurts! 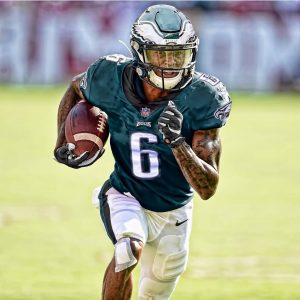 In round 2 at 37 overall, the Eagles continued to demonstrate their commitment to Jalen Hurts as they turned their eyes back to the Alabama talent pool to select OL/C Landon Dickerson. Dickerson is an absolute wall and a clear first round talent. He fell to the early 2nd round because of an unfortunate injury history in his collegiate career; most recently suffering an ACL tear in the 2021 National Championship victory over Ohio State. The Eagles OL was depleted by injuries last season and with All-Pro Center Jason Kelce flirting with retirement, Dickerson is a very smart talent addition! He will slot right into an interior lineman position and be the future Center when healthy!

In the 3rd round at 73rd overall, the Eagles targeted another position of need with a DT. Milton Williams was the selection to replace Malik Jackson and play alongside All-Pro DT Fletcher Cox. The Louisiana Tech product is an extremely intriguing player and has become known as Aaron Donald lite. Williams lacked the Donald level college production to support his 1st round draft capitol, but their physical testing numbers are shockingly similar. Check this out: Williams stands 2 inches taller and weighs 1 less lb. than Donald, but Williams ran a faster 40 yard dash, short shuttle, and three-cone drill, and out-performed Donald in the vertical and broad jumps! Donald completed 35 bench reps to Williams’ 34! Aaron Donald is in a class of his own, but the peripheral athleticism of Williams simply cannot be ignored!

New defensive coordinator Jonathon Gannon not only needs to generally bolster the secondary but needs to especially due to the NFC East teams maintaining (Dallas Cowboys impressive trio of WRs) and adding extra pass-catching firepower through free agency and the draft. Philadelphia’s new opponents include the likes of Kenny Golladay and Kadarius Toney (New York Giants) and Curtis Samuel and Dyami Brown (Washington Football Team). The First Team All-Big 12 CB McPhearson and 2019 2nd Team All-SEC and National Champion Stevens lands in an Eagles secondary group that seemingly is always in need of help. Led by veteran stud Darius Slay, the Eagles secondary has some intriguing pieces to it but have their work cut out for them!

One of the more (and shockingly many) surprising skill position players to see fall in the draft was Memphis RB Kenneth Gainwell. At least for fantasy purposes our radars are extra sensitive to where these intriguing RB prospects like Gainwell will land, but the Eagles made a surprising move and swooped in to snag him as a great value in the 5th round! I say surprising only because I thought the last position the Eagles needed to address was the RB position. Nevertheless, they land an RB with plenty of pass-catching upside as Gainwell is the latest to be drafted from the Memphis RB tree among the likes of Antonio Gibson, Darrell Henderson, and Tony Pollard. Gainwell will seemingly slot right into a backup role as a “hurry up offense” and pass-catching RB to mix in when Miles Sanders comes off the field. The most telling part of this draft pick is the further evidence of commitment to QB Jalen Hurts by adding another pass-catching weapon to the rebuilding arsenal!

The Eagles had 4 selections throughout the 6th and 7th rounds which were focused solely on defense. The Eagles defense is in a unique spot; not only experienced some change in personnel but also performed below expectation (as did the rest of the team) in 2020. The expectations for the new coaching staff are high, well to at least to demonstrate progress is being made as Philadelphia attempts to remain competitive in their rebuilding stages while stewing in an overall inconsistent division. The Eagles land three collegiately productive players that fill immediate roster needs. 2021 Senior Bowl attendees DT Marlon Tuipulotu and DE/EDGE Tarron Jackson have their work cut out for them as they aim to stop the likes of Saquon Barkley, Ezekiel Elliott, and Antonio Gibson. While versatile LB/EDGE Patrick Johnson will mix in in the overall weak LB group. The Eagles announced Johnson as a LB but will likely be utilized as an outside linebacker and involved as a pass rusher.

Realistically Philadelphia is a couple years away from being true NFC contenders or even favorites in the shaky NFC East but in this draft they were able to fill some coveted roster needs. The 2021-2022 season will likely be a monitoring process of Jalen Hurts and the new coaching staff while ultimately anticipating the 2022 draft where they will have at least 2, but very likely to have 3 1st round picks!