So if you weren’t aware, the NFL Free Agency period started on March 15th and it was a pretty busy first week. It has since slowed down a bit so I wanted to get an article out talking about the players I’d be looking to buy or sell based on some Free Agency moves. I broke this article up into rebuilding and competing sections but, as always, the information can be beneficial to either type of team as long as it helps improve your team.

Disclaimer: Mileage may vary based on your league-mates and your scoring/team composition. I usually write from the perspective of a 12-team .5PPR superflex league so make sure to adjust accordingly. If you have any questions about your specific situation though, feel free to reach out to me on Twitter @NeutralZoneFF.

I wanted to start with the Pittsburgh WRs since it allows me to highlight a unique situation going on this Free Agent period. Basically, an unusually high amount of Free Agents are signing 1-year deals this year. This is because in 2021 the cap for NFL teams has gone down so teams have less money to spend, but it should go back up next year. So what that means for Free Agents is that there really isn’t much of a market for them this year. With that, some of the players signing 1-year deals are betting that they will perform well enough this year to earn a bigger payout next year. Navigating this cap situation is tricky (for both us FF players and real NFL GMs) but it’s really helpful to understand so that you can take advantage of it. In addition to my example here, it’s worth looking at other players that signed 1-year deals to see if they are in a situation to take a big jump next year.

So I laid all that out because Juju Smith-Schuster is one of the players that signed a 1-year deal. Obviously now there’s going to be a lot of competition again in Pittsburgh this year which will make it hard to guess who’s going to score the points week to week. If you’re rebuilding though, I’d say all three of Juju Smith-Schuster, Diontae Johnson, and Chase Claypool are players worth trading for. Juju and Johnson are both 24 while Claypool is 22 and all three have shown real potential which is exactly what you’re looking for as a rebuilding team. If Juju had signed a multi-year deal it would be different. With a 1-year deal, I don’t expect Juju to be on Pittsburgh next year and I think that is beneficial to all three players. Juju will hopefully go off to be a key player on another team while the other two can stay and dominate in Pittsburgh in 2022. You might be able to get a discount on these guys too due to the uncertainty with the three competing in 2021. A competing team might not be willing to play the guessing game and could be looking to move them. So if you can swing it, I would be looking to buy any of these players for around a late 1st or a couple early-mid 2nds. 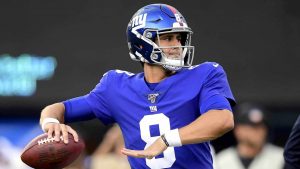 Yeah, I’m really saying it’s a good time to buy Daniel Jones even after a couple fairly disappointing seasons. You should be able to use that to your advantage though. I really haven’t been a fan of him so far so when I say it’s a good time to buy you can be assured it’s not coming from a fan-boy. Bottom line, I think the Giants have set Jones up for success this year. Two notable Free Agent moves were the Giants signing Kenny Golladay and Kyle Rudolph. While neither of them are world beaters, they are new weapons, coupled with the rest of the Giants receiving group (Engram, Shepard, Slayton, etc.), and with them getting Saquon Barkley back, this offense should really take a step forward this year. Let me be clear though, I do not at all expect a similar situation to 2020 Josh Allen. I don’t see a top-10 talent out of Jones but I expect him to jump into that serviceable QB2 level this year. I’d really prefer him to be no higher than the QB3 on my team though. Jones is just cheap enough now where the risk is worth the reward. He is another player I’d be looking to buy for a late 1st or a couple early-mid 2nds in superflex. I think he’s less risky than the players you’d be picking up in that range, but not by a whole lot. We know the Giants want him to be the guy, we know their offense is in a pretty good situation, and we can be pretty sure that he will score you at least a serviceable amount of points which you can’t say for all incoming rookies.

Now Crowder’s not a very exciting player to pick up, but that’s usually the players you can get deals on as a competing team. He’s coming off a roller-coaster of a year with as many games missed (4) as he had with 20+ points. That coupled with the signing of Corey Davis has plummeted Crowder’s value. Nowadays you can probably get him for an early 3rd and I would definitely be trying to. Late round picks are pretty much always dart throws (K.J. Hamler, Joshua Kelley, Bryan Edwards, Cole Kmet, etc.) so unless you’re in love with a certain rookie in that range, I would cash it in. Obviously Crowder’s not going to be an all-star WR given his situation, but for his price he should get you enough points as a flex option or bye week fill in. 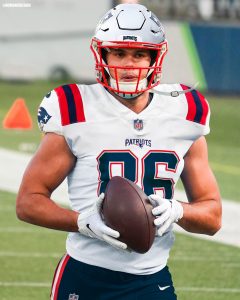 Similar to Crowder, I think both of these guys are worth buying during their dip in value. Obviously it’s not great that they will be competing with each other for the next few years but they have both been solid players and don’t have a lot of competition outside of each other. This is who they’re up against:

Basically what I’m trying to say is that both Smith and Henry should have plenty of targets available to them. This is probably a better situation than one of them going to a team like the Falcons or the Cowboys where they’d be competing with serious WRs. The Patriots are set up to run a lot of two TE sets which they have been successful with in the past. I’m not saying Smith/Henry will be the next Gronk/Hernandez by any means but they will score you points which in the current TE economy is all you can really ask for. This does assume the Patriots don’t draft any WRs or TEs but I think with two big TE signings and a few new WRs, they will probably stay away from any big names. So if you need a TE and can pick up either of these guys for a mid-2nd, I would do it. Again, it’s a late enough pick where the rookie you’d get will be just as risky but at least you know what you are getting from these two. Probably not top-5 TE points but good enough to fill the TE spot each week.